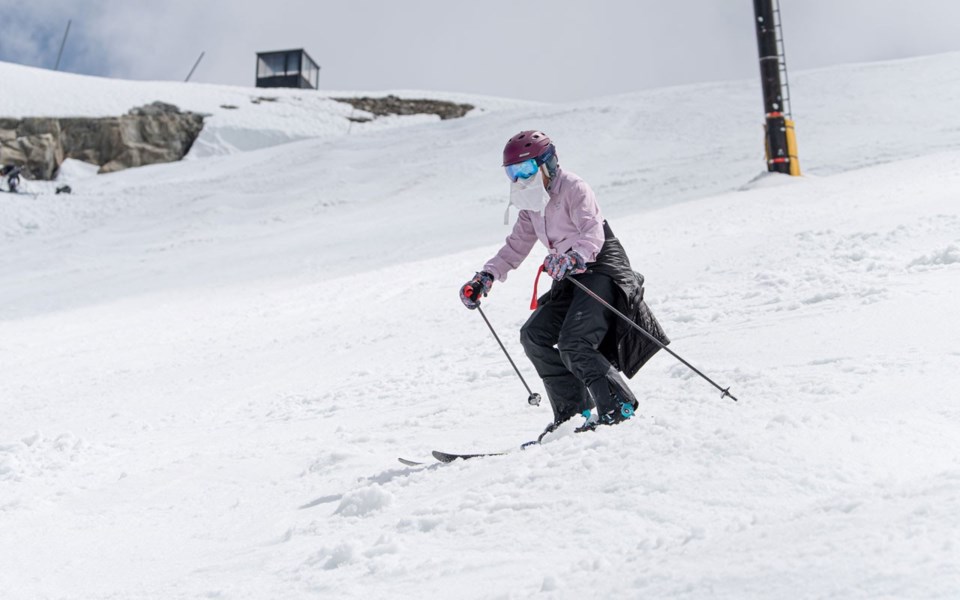 Since then, she's become a Pilates instructor, taken up golf, joined a weightlifting gym, and took dressage lessons on her horse. She also took her skiing to the next level, instructing at her local hill, Mt. Brighton Ski Area in Michigan and later, at its Vail Resorts cousin in Park City, Utah.

However, she had never done moguls before, and at the age of 72, opted to come out to Whistler for Momentum Ski Camps' first summer session of 2019 last month. Despite suffering from arthritis in her ankle from a previous fracture and beating breast cancer five years ago, Arwin felt it was worthwhile to pursue moguls while she still had the opportunity, eventually being named the most inspirational skier from her week.

"I would be more inspiring if I was a little better moguls skier, because I'm not there yet," she quipped.

While skiing Blackcomb Mountain's Horstman Glacier, Arwin was surprised to learn how much technique there was to skiing moguls, though she gained confidence over the course of the week and feels ready to tackle the bumps.

"When I first started, I couldn't imagine skiing a moguls field, and now I can imagine it," she said. "I've got a better understanding of what I'm supposed to do, what I can work towards.

"I would go and try moguls now, and practice the things I've learned ... I can stand at the top of a moguls field, look down and think, 'I probably can do this.'"

What proved to be helpful was that Arwin and the five other skiers in her group had a rotating cast of coaches instructing them in different elements of moguls skiing each day, providing new perspectives on their skiing and allowing for the fact that not everyone learns in the same way.

The week was a tough one even without considering the physicality of learning how to ride some rough moguls over and over again. Arwin said the journey just to get to the glacier was "arduous," requiring a hike up a steep rocky path to get to the mogul field T-bar.

It was admittedly tough on Arwin, who acknowledged she was drained by the time the midweek break rolled around. However, a yoga session and trip to the Scandinave Spa proved to be rejuvenating. On a daily level, to handle the activity, Arwin started drinking coffee and stopped consuming alcohol, took vitamins and an anti-inflammatory, and applied diclofenac and CBD balm to her sore joints. She also wore wrist, knee and back braces, resistance shorts for hip protection and SkiTrax to help with the rocky walks.

It was a strong level of commitment for Arwin, who admittedly didn't care much for the sport the times she had tried it before retirement.

"I wasn't very good and I wasn't very serious about it," she said. "When I first started skiing, I didn't love it. I didn't have that thrill and that love of being on the snow and floating down the mountains."

However, once she started to find some success, it became more enjoyable, while advances in technology have made it easier and more comfortable to take part.

"It was when I became a better skier, and I could enjoy the pleasure of it more than being worried about 'Can I stop? Can I turn? Are my feet going to be cold?' Having the right equipment is a huge part of it," Arwin said, adding that she enjoys teaching children at her home mountain of Mt. Brighton, located just to the north of her hometown of Ann Arbor, Mich.

Though her home resort doesn't have moguls, being just 100 metres of vertical, Arwin plans to return to to Park City to test her skills on their bumps, and hopes to register for next year's moguls camp through Momentum.