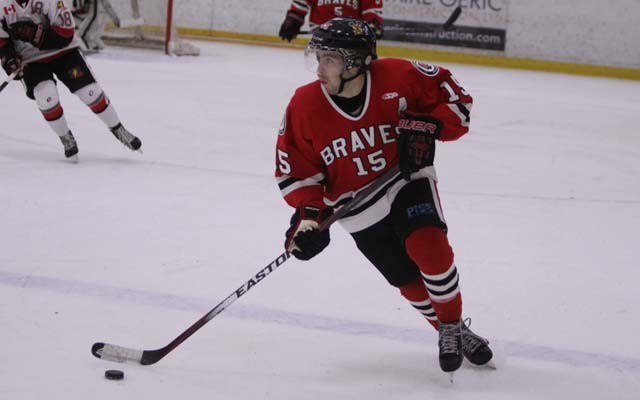 BRAVE BACK Whistler's Evan Horvath came back to the Saanich Braves after a stint in Hungary. Photo by Dustin Robirtis

At the start of the hockey season, it normally just takes Evan Horvath a quick drive and a ferry ride to get back to the Saanich Braves.

This year, he took a bit of a detour, spending a stint in Hungary after receiving a chance to try something a little different.

Horvath started the season spending two-and-a-half months with the Vasas U20 squad of the Erste Bank Young Stars League, notching four assists in nine games. However, he opted to return to familiar surroundings, coming back to Saanich for their Oct. 21 game. Since suiting back up for the Vancouver Island Junior Hockey League club, he's tallied eight points in eight games, including three goals as the Braves challenge perennial contenders Victoria for first place in the South Division.

"It's been awesome coming back to a strong team. We've had a lot of issues in the past with being a deep team that's fully committed and this year, we're doing a really great job of it," he said. "Many of them I've played with in the past but there are also a lot of new guys on the team and the new guys have fit in quite seamlessly."

Horvath, an alternate captain with the Braves last year, slid back into that role again when he came back. He acknowledged it was a little strange coming back in midstream, but seems to have adjusted with a pair of three-point games.

"It was a little bit unusual at the beginning because I was given the alternate captain's letter again on my return. I felt a little bit of, not tension, but just a lot of the guys didn't know me, know how I play or what I do. It took a couple practices, a couple games to get that back," he said.

Horvath said he received an invite from a scout scouring for hockey players of Hungarian descent. Though he was considered an import this season, Horvath likely would have shed that label for next season and avoided the league's import restriction if he had stuck around as he was in the process of applying for a Hungarian passport.

"There was a gentleman that found my name on Facebook, or who found my name from just being in the hockey world, and he contacted me on Facebook and said, 'Your last name sounds Hungarian. Are you Hungarian? Do you know that you have an opportunity if you are Hungarian to play in Budapest?'" Horvath recalled, noting another Canadian joined him. "He put in a lot of work and organized it so that we could both go over and play."

Ultimately, though, Horvath said he felt more comfortable back home in British Columbia and opted for a return to Saanich.

"The ice is so much bigger so our team, specifically, played a lot of different systems. There was lots of things that I had a really tough time agreeing with because I'd been taught all these lessons in North American hockey and a lot of them are contradicted when I go over there," he said. "It took a bit of time to adjust to how they play and what they're expecting and little things about the game that they do completely different.

"By the end of the time that I was there, it was becoming much easier. The play became almost seamless after a couple of months."

The wider ice surface, Horvath said, led to coaches demanding a slower pace of play, which didn't mesh all that well with his preferred style of play.

"In North America, we played a bit more run-and-gun or a much faster-paced game. There was a lot of times where our coach would be getting mad because we were skating too fast and the guys on our team aren't there with us. We skated ourselves into no options," he said. "We made it hard on ourselves because we weren't working well. We're working hard, not smart."

At this point, Horvath is hoping to earn a scholarship to a Canadian university, though he hasn't ruled out playing in the United States in the NCAA.