There was a huge turnout for the annual 5 Peaks Trail Running Series events in Whistler last Saturday, with close to 500 runners taking part in the 10.6 km Enduro, 4.9 km sport and 1 km Kids Challenge races.
Aug 28, 2009 7:25 AM By: Andrew Mitchell 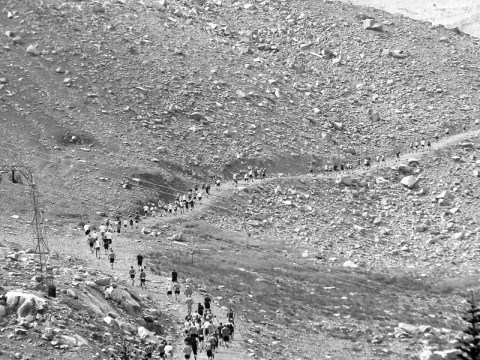 There was a huge turnout for the annual 5 Peaks Trail Running Series events in Whistler last Saturday, with close to 500 runners taking part in the 10.6 km Enduro, 4.9 km sport and 1 km Kids Challenge races.

While shorter than some 5 Peaks races, most runners would say that the Whistler event - taking place on a series of roads and trails through the alpine of Whistler Mountain - is one of the toughest. The climbs are long and unforgiving and the downhills steep and technical. After a long climb up to the peak of Whistler, the Enduro racers go all the way back down to Harmony Lake before the uphill finish.

Edward McCarthy of Vancouver placed first overall in the Enduro, completing the course in 55:09 while averaging a kilometre every 5:13. James Richardson of Vancouver was second by roughly a minute and a half in 57:24, while Ryan Ervin of North Vancouver was third in 59:34. They were the only three runners to break the one-hour mark.

"It was a lot harder than I thought," said McCarthy, who was racing the course for the first time. "The uphills were really long and steep, but then the downhills were really steep and technical. I'm also not used to the altitude, I do most of my running in Vancouver and everything is pretty close to sea level. That hurt a lot more than I expected."

McCarthy, who is in training for the world mountain running championships, says he broke out on the first climb with a group of runners, but was on his own by the time the course headed out to Harmony. He did the odd shoulder check to see if any runners were gaining on him, but otherwise didn't look at his watch and tried to run his own race.

"I did a few shoulder checks, mostly on the climbs because I didn't feel like I was going that fast. To be honest I think I'm a little better on the downhill sections, that's where I made my best time. You never know who's sneaking up behind you."

Jesse Lyman of Shawnigan Lake was first in the men's Sport course in 28:22, followed by Doug De La Mare of Whitehorse in 28:36 and Ray Barrett of Vancouver in 28:54.

In the Kids Challenge, Ben Hegditch was 28 th and Julia Hegditch 35 th respectively. Kerry Walker of Pemberton was 20 th .