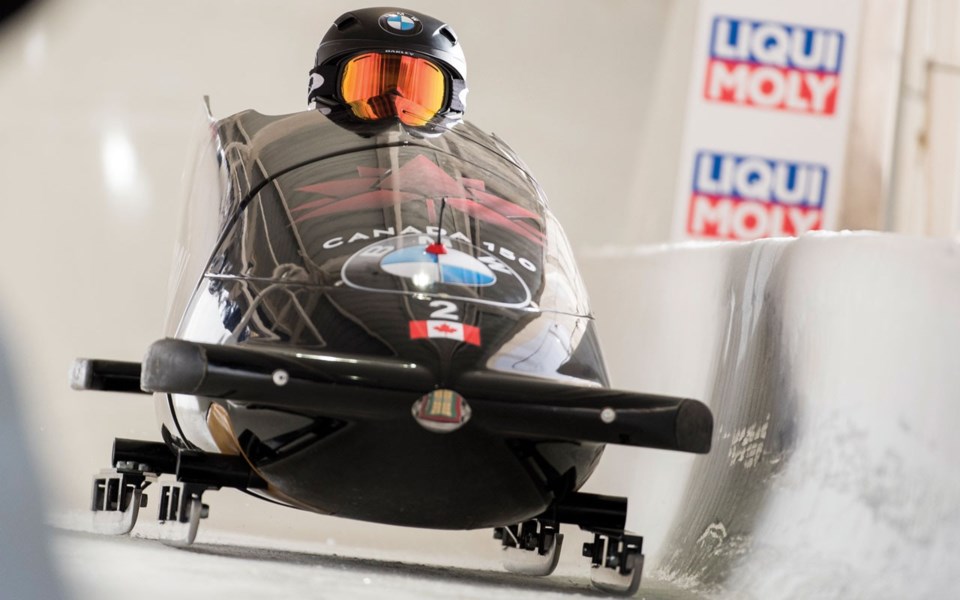 HOT ROCKET Kaillie Humphries and Melissa Lotholz will look for their third medal of the season this weekend at Whistler Sliding Centre. By Viesters Lacis courtesy of IBSF

The best in the sliding sports world will descend on (and down) the Whistler Sliding Centre, as the IBSF World Cup makes its third stop of the season here this weekend, Nov. 24 and 25.

Team Canada has high hopes for podium finishes, as it competes against 24 other nations in preparation for the Pyeongchang Olympic Games in February.

On Nov. 25, it will be the men's skeleton followed by four-man bobsleigh.

"These two sports in particular, we have a good chance at medalling with all of our athletes, so it'd be great to come out and cheer them on, and have a preview of where our teams are at compared to the rest of the world," said Tracy Seitz, managing director of the Whistler Sliding Centre.

Humphries and Melissa Luoholtz have a gold and a silver on the year, while a deep men's bobsleigh program has three total. Alex Kopacz and Justin Kripps got a silver in Lake Placid's two-man race, and in Park City teams of Lascelles Brown, Ben Coakwell, Neville Wright and Kripps, and Chris Spring, Jesse Lumsden, Oluseyi Smith and Kopacz finished second and third respectively.

"We're in a position right now I don't think we've ever been in with Canada Bobsleigh, where we have so many fantastic athletes and so many people that can threaten to be on the podium in any given race; that's a special circumstance," said le Bihan. "It doesn't happen that often. To have that many high-calibre athletes that can compete and beat the rest of the world."

Of course, when you have that many great athletes, it can make sorting out who goes where difficult.

"It's funny right? You dream of it and you want it, and then when you get it, it becomes very difficult," continued le Bihan. "It is all based on performance, that's how we run our programs, we have a clear selection criteria. Once you get into the season, the coaches decide which athletes are pushing which pilots. So far we've made really good decisions; the best are with the best."

Canada is far from the only nation with returning champions though. Whistler will also welcome back Martins Dukurs of Latvia and Alexander Tretiakov of Russia, who won silver and bronze here during the 2010 Olympic Games. Tretiakov went on to capture gold in Sochi's 2014 Games, where Dukurs once again finished second.

"The World Cup circuit, especially in an Olympic year, is the elite of the elite," said le Bihan. "Lots of people have a decade of experience driving, and we've had lots of competition on this track throughout the years, so most of the people out here have a lot of experience on the track to be competitive."

Because it's an Olympic year, the race will be held earlier than it has been in past years. The track remains in great condition, but the Sliding Centre is aware that it could be tougher to draw crowds. It's hoping to get a good turnout, though, in order to give the venue a good test before hosting the IBSF World Championships next season.

"It's not peak time in the village, we'll be relying a lot on our locals and residents in the Sea to Sky corridor. It'd be great to have 1,500 people out a day. That's a good goal," said Seitz. "Considering we have the World Championships next year, which is a much bigger event, it'd be great to test our capacity a little and get 2,500 to 3,000 a day. That would be the ultimate goal."

Individual tickets are $10/day and families (two adults and two children) are $20. Both can be purchased at the Sliding Centre or online at: www.bobsleighcanadaskeleton.ca/en/events/worldcup.