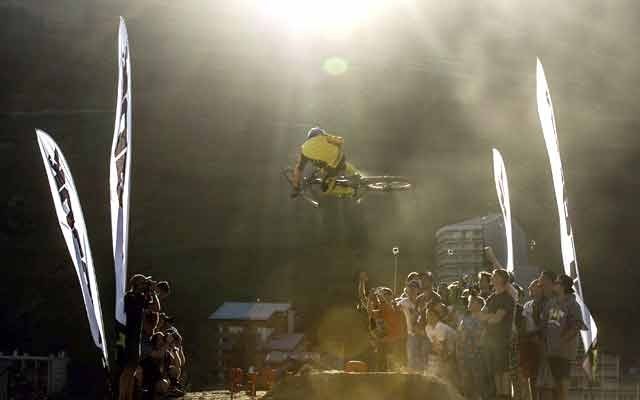 Finn Iles' ability to make an impact on the Crankworx world outside of Whistler was delayed a bit.

The Team Lapierre Gravity Republic rider, who turns 16 on Aug. 15, was forced to sit out the first event of the year, the first-ever Rotorua competition in New Zealand, because of injury.

So when he healed up in time for the second of three events at the Les 2 Alpes resort in France, he was dead set on leaving an impression.

The Whistler resident did just that, placing first in his age category in the downhill race and placing second in the European Whip-Off Championships.

In the downhill, Iles topped a field of 20 riders with a time of four minutes and 3.57 seconds (4:00.357), besting runner-up Kaos Seagrave of Great Britain by over 13 seconds.

"It was a little tricky to figure out how fast you could go just because it was so slippery with the dust," he said. "There were a few lines that were a little bit hard to get at first, and then after I had that figured out, I was just trying to find speed where I could and being smart and smooth where I needed to be."

As for the whip-off competition, won by Brazilian Bernardo Cruz, Iles was happy with his performance while explaining a smaller jump forced him to adjust his timing. The differences took a little bit away from the full effect fans might expect from the defending World Whip-Off champ.

"It was harder to whip it super sideways."

Iles spent the five weeks leading up to the event in Europe getting acclimatized to the area and focusing on Crankworx, which was the only competition on his slate at the time.

"It was weird being at a Crankworx that wasn't in Whistler, but I really enjoyed it. It was a cool atmosphere and a really nice, beautiful place," he said. "It was important to me to do well, so the trip was well worth it."

He felt it proved he could compete with Europe's best, and gave him a major confidence boost as he prepares to defend his home turf in about a month.

Brown, who hails from Revelstoke, defeated Swiss rider Emilie Siegenthaler and Dutch competitor Anneke Beerten for the honour and has now won both whip-offs this season.

Canadian Brett Rheeder has the inside track to the Crankworx World Tour slopestyle title.

The Torontonian has won both events this season after scoring a 93.25 in France, besting runner-up Brandon Semenuk by a full four points. Belgium's Thomas Genon placed third with a score of 88.00.

By picking up 150 points in the standings, Rheeder now has 300 points and holds a 150-point advantage on second-place rider Genon, giving him a great shot at clinching the title outright when Crankworx wraps in Whistler next month.

Semenuk, a Whistler product, did not pick up any points in the first competition in Rotorua, New Zealand, and is currently fourth in the standings with 100 points.

Bruni on track for DH title; women's crown up for grabs

Bruni posted a time of three minutes, 44.7549 seconds (3:44.7549) to finish 4.6 seconds up on countryman Remi Thiron. New Zealand's Sam Blenkinsop put up his second third-place outing in as many attempts.

Bruni's 300 points double Blenkinsop's 150, and he, too, controls his destiny for the overall crown.

The women's side is far less clear, though, as Australian Tracey Hannah holds the lead after a pair of second-place showings so far this season.

Hannah was just 0.028 seconds behind French rider Myriam Nicole's winning time of 4:28.321. Nicole, Emilie Siegenthaler of Switzerland and Great Britain's Rachel Atherton are all 50 points behind Hannah in the overall standings, setting up for cutthroat racing action here in Whistler.

The French riders swept the top of the podium in the pump track events, but two Dutch competitors still hold the overall lead heading into the final challenge.

On the men's side, Adrien Loron defeated Joost Wichman of the Netherlands in the big final. Wichman was victorious in the Rotorua event, however, and has 250 points in the overall standings. Loron is second with 190, while fellow Frenchman Tomas Lemoine and New Zealand's Keegan Wright remain in contention with 150 and 100 points, respectively.

It was a similar battle of countries on the women's side as Anne Caroline Chausson edged out Anneke Beerten in the big final.

Beerten still leads for the overall title with 250 points compared to Chausson's 150. American Jill Kintner still has an outside shot at a share of the title with 100 points.

Parity reigns in DS&S (dual speed and style) as five riders still have a shot at the overall title.

Great Britain's Bernard Kerr defeated countryman Sam Reynolds in the big final and is hanging on to the overall lead with 225 points.

A third-place finish helped the Frenchman Loron retain second place, while Sweden's Martin Soderstrom (who won in New Zealand but missed the French event due to injury), Reynolds and American Kyle Strait all remain in the hunt with 150, 100 and 90 points, respectively.

Canadians could be royals

Canucks could capture the big crowns, as King and Queen of Crankworx titles will be on the line here in Whistler.

Casey Brown's efficiency has served her well, as she has 330 points on the strength of two victories in three events. Anneke Beerten leads with 395 points, while Emilie Siegenthaler (325 points), Anne Caroline Chausson (300) and Tracey Hannah (200) round out the top five.

Rheeder has a little more work to do to contend for the men's title, as he currently sits third, tied with Bruni with 300 points with each having taken wins in both their events. Bernard Kerr, the Brit, holds the lead with 400 points after taking a more diverse approach, scoring one win in his six outings. Loron is second with 365 points.

Full results are available at Crankworx.com.