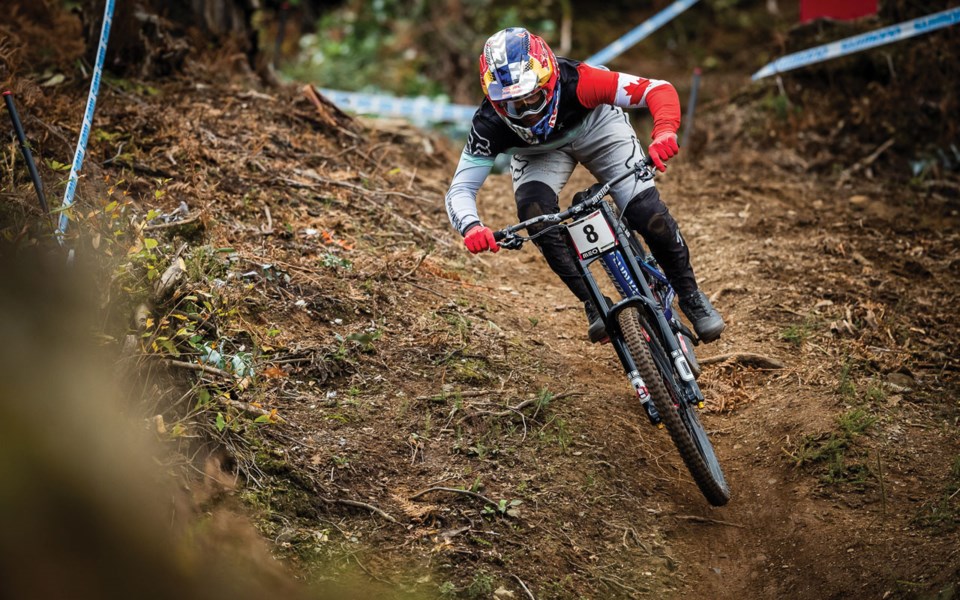 The 2020 UCI Downhill World Cup season was a campaign unlike any other, according to Whistler competitor Finn Iles.

In a Nov. 9 interview after the conclusion of the delayed and abbreviated roster of races, the 21-year-old described an autumn of uncertainty during his two months in Europe.

“Nothing felt remotely normal. It was super odd,” he said. “It felt like we were just there, we had our group of 11 people on the team. We never really left the group. We always wore masks. We drove everywhere instead of flying.”

Iles added that other missing elements included autograph sessions, media commitments and socializing with riders on other teams.

Even around the course, things were different, as competitors had to mask up right after finishing their run. When the day was done, they’d all head back to their respective rooms.

All in all, though, Iles said he felt satisfied with the protocols the circuit put in place to protect all involved.

“If you would have asked me in May if I thought I was going to be going over to Europe or if we were going to have any World Cups this year, I would have told you no,” he said. “It was an ethical dilemma choosing to go over there or not. I stayed prepared, training the whole summer, but when it came down to it, it seems like everything over there was well set up for us to be protected, as well as for other people to be protected from us.”

One significant challenge, Iles explained, was the lingering sense of uncertainty throughout the eight weeks abroad. He flew to Europe on Sept. 7 with no assurance that any events were on, but had to be around in case they happened, starting with World Championships at Leogang, Austria in early October, where he placed 34th.

“Even when we were there, we were a week out from Worlds and they said, ‘We still don’t know if it’s going to happen,’” he said. “The day before the track walk, they’re saying, ‘There were more cases in Austria today than we’ve seen in a long time. We don’t know if the event’s going to go through.’”

That continued through the first pair of races at Maribor, Slovenia from Oct. 15 to 18 and at the season-ender at Lousa, Portugal from Oct. 29 to Nov. 2.

Iles noted that when in Portugal, he was surprised at the mixed messaging, as the federal government was pondering tighter restrictions (later implemented) just days after allowing more than 27,000 spectators at an F1 auto race.

As for his own riding, Iles said he was mostly satisfied with his performance once he got going after an admittedly slow start in part because there were no spectators, but also because there was no feeling of a lead-up like usual. He took 21st in the first Maribor race before finishing fourth, just 0.46 seconds off the podium and 0.86 seconds out of first in the second contest. At Lousa, Iles took results of 35th and 16th to finish 13th in the overall standings.

“I almost did feel like we were racing a World Cup,” he said of the first Maribor race. “I had a few mistakes and finished too far back. After that, I kicked into gear and realized what we were doing.

“From there, in the last two races, I was riding at a really high pace and I felt like I had what it took to get a win, or at least get up on the podium again. I just had a few stupid mistakes. I wasn’t riding my smartest.

“I know the speed is there. I just need to become more consistent.”

The timng of the races also created challenges. At Worlds, riders had to contend with snow and muddy conditions, for example. Even with similarities on the surface, Iles said the Sea to Sky’s winter riding conditions of mud and heavy rains weren’t comparable to what was presented this season.

“I ride in the mud all the time in the winter, but you can’t prepare for the winter that we had over there of just torrential rain, really deep mud and it’s conditions that no one was prepared for,” he said.

Looking ahead to 2021, Iles will look to fine-tune his strength and fitness while also reining in his occasional recklessness that has prevented consistency.

He also feels that a newfound sense of adaptability and versatility developed during this season will be useful going forward.

As he quarantines and rests, Iles said he plans to start training in December to ramp up for a crucial campaign.

“Next year is a big year for me. It’s a year where I should be taking a big step up and being a consistent podium finisher,” he said.