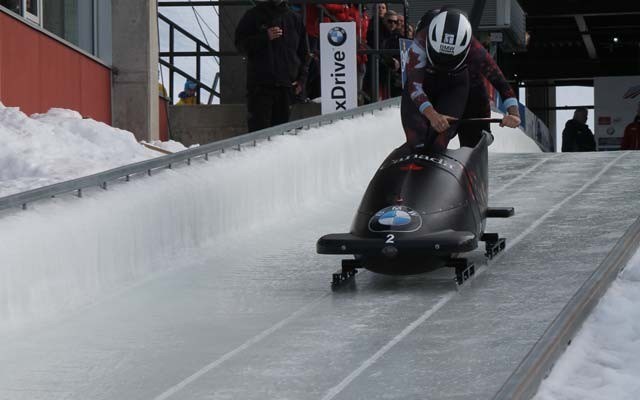 Lonnie Bissonnette made a little history in Calgary on the weekend.

The 47-year-old from St. Catharines, Ont. won the first-ever national para-bobsleigh championship during the Canadian championships at Calgary Olympic Park on Oct. 29.

Bissonnette, paralyzed after a base jump in 2004, is the sport's defending world champion and was thrilled to tick the Canadian title off his list, too.

"In future years when I'm done it will be nice to look back and say I'm the first para-bobsleigh champion, but right now I really try to focus on each run, and just keep getting better," Bissonnette said in a release.

The sport is provisionally set to make its Paralympics debut in 2022 and Bobsleigh Canada Skeleton is looking to strengthen its ranks well before then.

In para-bobsleigh, competitors in a mono-bobsleigh (one-person sled) are dropped into the track "at the crest of the downslope" and pilot the vessel from there.

Humphries and Melissa Lotholz knocked off Alysia Rissling by 0.97 seconds to take the title while Christine de Bruin placed third.

In the next day's four-man races, the results were much the same as Humphries and Kripps topped the podium again. Kripps beat Poloniato's sled by 0.42 seconds and Spring's by 0.59 seconds while Humphries easily bested Sarah Monk by 5.66 seconds.

Some ended up doing pretty well, too.

Michael Murdoch captured the 10-kilometre race in a time of 42 minutes flat while Joe Davies was 19 seconds back. Both are top Nordic skiers. Tom Ballhausen, meanwhile, was 58 seconds back of Murdoch. Merrily Harris, Erin Crawford Stephanie King were the top three women in. All told, 32 runners took part.

Logan Sadan, meanwhile, ran away with the kids' five-kilometre title in a time of 25 minutes and 42 seconds (25:42). Sierra Pochay-McBain and Naomi Solar Robert rounded out the top three in the seven-kid field.