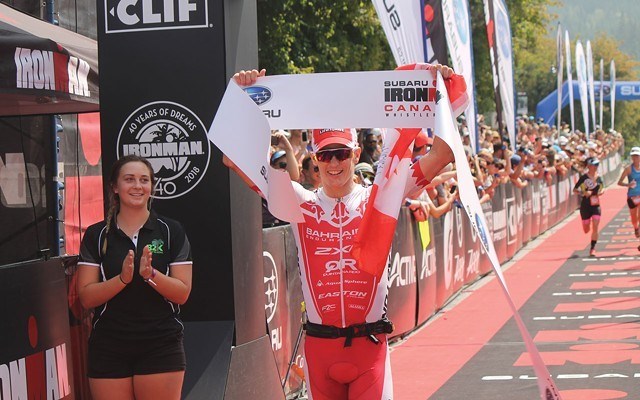 Subaru Ironman Canada will hold its last event in Whistler later this month before returning to Penticton for 2020. File photo by Dan Falloon

With the news that Subaru Ironman Canada is set to return to Penticton a year before its contract with the Resort Municipality of Whistler (RMOW) and Tourism Whistler (TW) was set to expire, the RMOW is saying the resort and the event got what it wanted out of the partnership and now is a natural time for the race to return to its original host.

Ironman confirmed on July 16 the months-long speculation that it was set to move back to the town that hosted the event from 1983 until 2012, when it moved to Whistler.

RMOW chief administrative officer Mike Furey said the working relationship between the race itself, TW and the RMOW was such that all three regularly discussed which elements worked and which did not. As such, he said it's difficult to even pinpoint which party first proposed a change of venue for 2020.

"We're constantly in discussion with them about understanding how the event is working for them here, understanding what their interests are, sharing with them how we are [doing] in terms of our occupancy and visitation," he said. "I can't, to be honest with you, put a finger on how this came about but it arose as an ongoing dialogue that we've had in place for six years."

Later in the interview, Furey said, "Ironman did convey to us ... that they were considering another location, and how would we feel about having a discussion about that?

"Discussions went back as far as April."

The City of Penticton released its Triathlon Strategy on May 3 in which it indicated "staff have been in discussions with IRONMAN over the past few months."

Mayor Jack Crompton previously confirmed that there is no penalty in the contract for an early termination.

When asked about why the RMOW would sign a three-year contract (in 2017 as the initial five-year agreement was set to expire), Furey again pointed to the positive relationship.

"When we sign a contract, that gives the parties comfort over what's going to happen over that period. When we have a relationship that we have, it allows us to come together like any two or three parties to a contract and say, 'Is this where we want it to be?'" Furey said. "Yes, we had a contract in place, but our working relationship allowed us to find a path forward that we think is in the best interests of the community and the Ironman thinks is in the best interests of their events as well."

Also part of the discussion from the RMOW and TW perspectives was that the resort initially brought the race to town with an eye toward bulking up its summer visitation and occupancy rates, a goal that Furey said has subsequently been achieved.

Furey credited Ironman for the economic impact the event brought to the resort, not just on event day but through athletes taking training trips to Whistler to prepare for the contest. However, with an outlay of between $250,000 and $282,000 in cash and in-kind commitments annually required over the race's seven years in the resort, Furey said the RMOW is looking for a better return on that investment by attempting to bulk up shoulder-season and mid-week visitation.

He also hoped to keep lines of communication open between the three stakeholders in the hopes of bringing an Ironman back to town.

"While it won't be returning in 2020, because we had such a great working relationship with the Ironman, we are going to continue to look for [all] of us—Ironman and RMOW and Tourism Whistler—to find future partnership opportunities," he said. "We haven't identified any of those at this time, but we are certainly going to keep the dialogue open and make sure that we maintain the goodwill and good working relationship that we have."

In the days leading up to the official announcement, Pique requested comment from Ironman regional director for the Northwestern U.S. and Western Canada Dave Christen, who publicly presented before Penticton council in May, but did not receive a response. However, during a press conference in Penticton on July 16, Ironman's vice-president of North American operations Philip LaHaye felt that the announcement was "like coming home" while thanking Whistler for the seven years it hosted.

"They've been a fantastic partner," he said. "We can't thank them enough."

Penticton Mayor John Vassilaki said during the presser that he was "ecstatic" to see the race back in the Okanagan.

"It's one of the finest events that takes place in the world," he said. "Our city is going to be humming again for a couple weeks."

In May, Penticton council voted to continue negotiations that would require the city to put up more than $400,000 a year in cash and in-kind contributions. The first race of the five-year contract will be held on Aug. 30, 2020.

The final edition of Subaru Ironman Canada will run in Whistler on July 28 and Crompton hopes to see the community send off the event in style.

"For anyone who hasn't experienced the Ironman finish line between 11 p.m. and midnight, they should do so this year. It's incredibly inspiring," he said.

This year's riders will hopefully have a bit more space to manoeuvre after a slight change to the course was announced.

This year's full Ironman course will take riders all the way up Callaghan Valley Road to Whistler Olympic Park and once competitors have returned to Highway 99, they will head south to the south end of Daisy Lake before turning around and returning to Alpine. That would make the course two laps instead of the three circuits from 2018, when the course was changed dramatically after the Village of Pemberton voted in 2017 against supporting further Ironman events beyond the initial five-year contract.

"By creating a two-loop course, it's not easier physically by any stretch, but I think that mentally, it's going to be a bit easier for the athletes," she said. "There's no question that it was crowded [in 2018] and that definitely came into part of our decision."