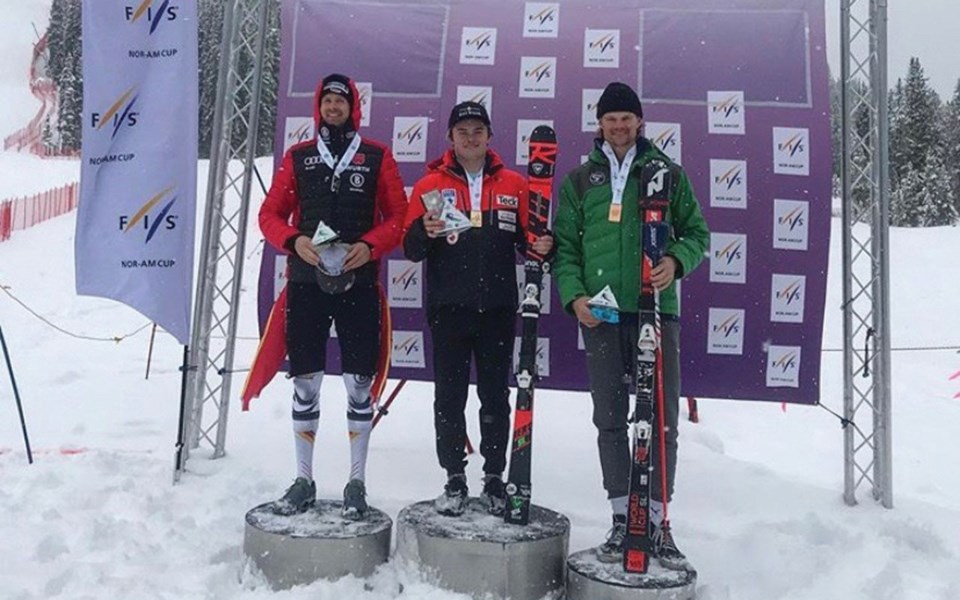 WHISTLER MOUNTAIN SKI CLUB (WMSC) alumnus Asher Jordan found himself atop the heap at the first NorAm Cup alpine action of the season at Colorado's Copper Mountain on Nov. 22.

The slalom win, his first ever on the circuit, was an early birthday present for Jordan, who turned 20 on Nov. 23.

Representing the BC Team this year, Jordan topped German Stefan Luitz by 0.88 seconds and American Sandy Vietze by 0.92 seconds to claim the victory. Jordan was the lone racer to crack 52 seconds on the first run, descending in 51.94 to take the early lead and then held on with the sixth-fastest second attempt.

Jordan, whose previous best NorAm result coming into the season was 14th in the giant slalom at Mont-Ste-Marie, Que. in January, said he didn't change much in the offseason, but some strong training gave him a boost before the races started for real.

"I just came in really confident to Colorado, had a great time in Germany skiing indoors. I came in with a positive mindset, super calm," he said. "Something clicked and it turned out pretty well, so I'm pretty happy, and I'm looking forward to the rest of the season."

Jordan started the week with a fifth-place finish in the slalom on Nov. 21, finishing 1.91 seconds back of winner AJ Ginnis of the United States and just 0.08 seconds off the podium. He was also the top Canadian.

Jordan said the Copper Mountain course was a new venue, so he and the field were about as level as it could get. However, the set and the terrain played to his strengths.

"It was pretty consistently steep, which was super nice," he said. "The course sets were pretty favourable for good runs on there."

While a birthday victory wasn't a motivating factor, Jordan said, when the snow had settled, it was gratifying to have a victory in his back pocket.

"It was pretty special when it happened. I've never really been home for my birthday, so it was good to be home with a positive week behind me," he said.

Jordan's time home was short, as he was set to head overseas for Europa Cup action on Nov. 25. He will be splitting time between the two continents this season, but if Jordan races similarly in upcoming NorAms, it's possible he could secure himself a slalom entry in the 2020-21 World Cup season.

"If I can keep this ball rolling, keep my momentum going, anything can happen," he said.

In women's action, fellow WMSC grad Stefanie Fleckenstein posted a 10th-place finish in the slalom on Nov. 19, finishing 2.96 seconds back of champion Lila Lapanja of the United States.

The next day, Fleckenstein skied to a 12th-place showing in the second slalom, finishing 3.20 seconds off the pace as Lapanja picked up a second straight victory.

Fleckenstein finished as the top Canadian both days.

The first FIS World Cup slalom of the year wasn't a great one for the Canadian contingent.

Only one man and one woman completed both runs in Levi, Finland in the weekend contests, and both finished well back of the pack.

In the women's race on Nov. 23, Erin Mielzynski was the only Canuck to finish both, though she was 25th, 5.27 seconds back of champion Mikaela Shiffrin of the United States. Switzerland's Wendy Holdener and Austria's Katharina Truppe rounded out the podium in second and third, respectively.

In the men's contest, Trevor Philp was the lone Canadian to make it through, placing 26th out of 28 qualifiers, 2.04 seconds back of winner Henrik Kristoffersen of Norway. France's Clement Noel and Switzerland's Daniel Yule took second and third, in order.