Journey to begin near Mount Currie 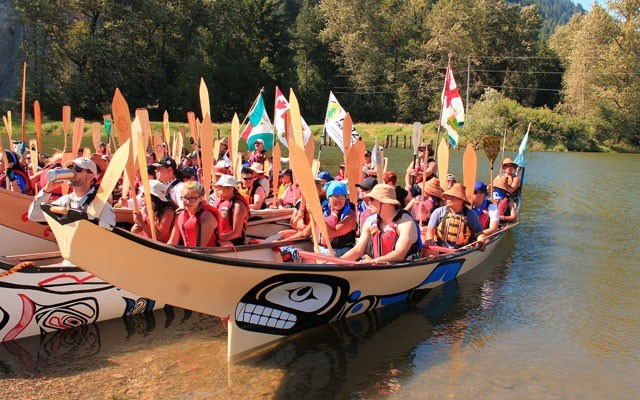 Ready to launch Paddlers from a previous Pulling Together Canoe Society Journey get ready to go. This year's will launch on the Birkenhead River on July 3. Photo by Jolene Andrew

For the first time in its 16 years, the Pulling Together Canoe Society's annual Journey will come to the Sea to Sky.

The Journey is set to launch Sunday, July 3 on the Birkenhead River, passing through Lillooet and Harrison lakes before ending up on the Fraser River on July 11.

Planning coordinator Kerry Lumsden said organizers have hoped to come to the area for about a decade, and roughly 400 people are expected to take part when the boats push off from the banks this weekend.

"It's been about 10 years in the planning because they knew, logistically, we will hit some bumps along the road," she noted, adding that the need to travel down a forestry service road was one kink in the plan.

The hosting nations are the In-SHUCK-ch Nations of Lil'wat, Samahquam, Skatin, Xa'xtsa and Sts'ailes — meaning several different planners are at the table when most Journeys have just a couple of hosts.

The Xa'xtsa First Nation bought a canoe so its residents could participate in the Journey this year and beyond.

"They're going to put all the youth members in that canoe," Lumsden said.

Though last year's Journey took place on Harrison Lake, none of the 15 previous sojourns had been on Lillooet Lake, and Pulling Together president Rhiannon Bennett was thrilled to break through and make it there in 2016.

"We've never been on these waters before, so that's a pretty big thing. This is the first chance we've been able to do this work in these communities and bring this kind of experience into these communities," she said. "We provide opportunities for public service agencies and law enforcement to build those relationships and understandings with Aboriginal people through canoeing together and through camping together and through sharing meals together."

Xa'xtsa consultant d'Artagnan Newton said paddlers on both sides tend to become closer over the course of the Journey.

"People have to demonstrate a story that links in with our mission, which is basically reconciliation between First Nations people and the government agents who have typically, over the years, been adversarial," he said. "What we've found over the years is people swap seats in canoes, so you'll have a young First Nations person sitting right next to an RCMP officer without actually realizing it's a policeman. They'll spend two or three days telling stories, paddling along and then two or three days later the kid goes, 'Oh, you're a cop?'"

Newton, who is also on the planning committee, said the community has not been involved before, so it can be tough to get things on a roll, but everything has come together and they are ready to go this weekend with help from the society.

"It picks up other First Nations and they typically become the hosts and they then become involved in the planning. Because it's never been to our area before, nobody in this area has been part of the journey before," he said. "It's been a tricky thing that we're kind of learning from scratch."