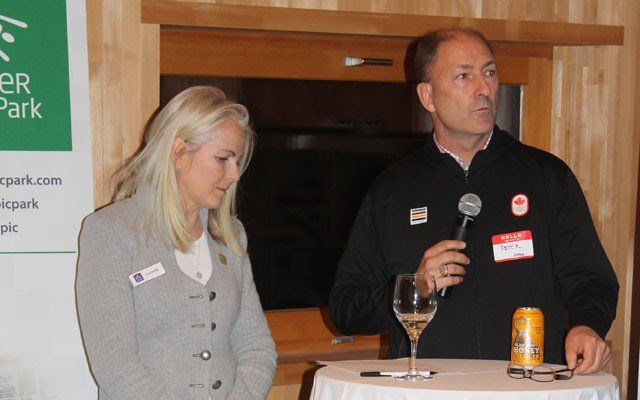 Peter Judge is settling in well to his role with Own the Podium.

Since taking the reins as the director of winter sport with the organization, which allocates funds to individual sporting organizations, Judge has learned how to remove himself a step further from coaching.

A five-time winner of the Canadian Coaching Association's Coaching Excellence Award, Judge has guided athletes to 10 Olympics, 69 World Championships and over 1,000 World Cup medals. He joined Own the Podium from his role as CEO of the Canadian Freestyle Ski Association, shortly after his charges won seven medals at the 2014 Winter Olympic Games in Sochi.

Now based in his hometown of Calgary, Judge has seen how hosting a Winter Olympics can change athletes in future Games, and he has noticed that Whistler is in many ways on a similar track to creating excellence.

Judge, who called Whistler home from 1988 to 2004, was back in town on Sept. 25 to honour local coaches at a reception at the PassivHaus as part of National Coaches' Week.

At the reception, Pique caught up with Judge to look back on some past experiences and look ahead to where Own the Podium, and the sport of freestyle skiing, is going. This interview has been abridged and edited.

Pique: How are you enjoying your new role?

Peter Judge: It's a bit of a shift in the sense that now, you're another layer behind the bench. The players were right there before and you were right next to the players. Now you're another layer back. From that standpoint, it's an interesting shift. Now for me, it's about working with my team of people, with my high-performance program advisors who are directly connected to the sport and working with the upper echelons of sport management.

It's fun. It's interesting. The first six months to a year was a bit more administrative than I wanted it to be. I believe we need to get in and get our fingers dirty. We need, to truly make a difference in sport, we need to do things, not just talk about things or plan things.

A good plan today is better than a perfect plan tomorrow. The original Own the Podium that was crafted to get success in 2010 was really about that. It had a plan, but it ran and it changed the plan along the way. By 2010, we got there.

Pique: What's your vision for the plan at this point as we get to 2018? Where do you hope to take things?

PJ: Right now, both the winter side and summer side are re-evaluating where we are in the continuum of the Olympic pecking order. The summer side has targeted that they would like to be in a top-eight position (in the medal standings), possibly, but that's down the road. Looking at Rio (in 2016) in the top 12. On the winter side, our mission, our mandate is to be in contention for No. 1. That's an ongoing battle because we're seeing the top get thicker and thicker. We saw the Russians come on ridiculously strong in a short period of time. The Chinese, we know what they did in Beijing in 2008 and we know they're going to attack the same thing in 2022... It's harder to define yourself and work your way through. Our mission is to try not only to hold our position inside of that pecking landscape, but also to try to pick ourselves up a little bit.

Pique: It's been a little while since you called Whistler home. How have you seen the community change in that time?

PJ: When the word first came out that Whistler was part of a Vancouver bid, looking at a Games option, I was really excited because I knew what a Games could do for this community. I was here when the announcement was made, and moved away just shortly after in 2004 and took the reins of the CFSA. Over that time period, the great things I had hoped for, and what I had seen in Calgary, really came to fruition here. The community was deeply touched and inspired by what the Games are. It's more than a sporting event. It's more than a party, and it sounds corny, but it is almost a religious experience for those who have experienced it in that way. It was a phenomenal thing for this community. It helped transform the community in many ways. It helped shift what it thinks it can be and where it thinks it can go, not just in a sports sense, but on a global platform.

Pique: How does Whistler fit into your arsenal in your new role? How does it give you confidence going forward?

PJ: It's a really critical component to our future success in sport, and particularly in winter sport... If you look at the sports that can benefit from the facilities here and the altitude here and the infrastructure here, winter sport is going to be the main beneficiary, but summer sport (can benefit) as well. We saw Calgary grow through its legacy facilities to be a global producer of elite athletes, we will see the Whistler corridor start to come that way as well.

Pique: Are there any athletes here you have your eye on that are benefitting from the legacies?

PJ: They're in a very broad spectrum of sports from the sliding sports to the snow sports to some of the engine sports. We still have a lot of work to do, particularly out of some of the classic sports where we need a lot of medal production to maintain, or get back to, that top medal position. Speed-skating is one and that's, right now, out of the realm of what's in Whistler, but certainly cross-country (skiing) and biathlon is another one of the major ones. We're going to need to depend on that production being more prevalent out of this area. There are great facilities, and we just need to find great coaches and get them involved in the equation to turn that page.

Pique: You helped lead the Canadian Freestyle Association to seven medals at the last Olympics. Is that something you're going to bank on again?

PJ: For me, it was the perfect end to a sport that I loved and I still have a great affinity and love for. After 40 years of waking up every day and thinking about, A) being full-time at the sport and B) thinking how I could be better as an athlete, better as a coach or better as a leader in the sport, it was an interesting shift and a timely shift. I was certainly transferring a lot of those lessons over and trying to figure out now how I can use those lessons to move the needle in other sports. It's been very interesting to work with luge, or work with bobsleigh, or work with some of the other snow sports and some of the ice sports — how we can flesh out some of those things and get the fire lit in those guys. In my heart, I'll rely on them as an anchor sport, but it was kind of an out-of-the-park performance. Is it possible again? As these things go, you win some and you lose some. That's the beauty of the Olympic Games... the Olympic Games are the ultimate original reality TV show.

Pique: In terms of freestyle skiing, how do you see the sport changing at the moment? Where is it going?

PJ: There's been a lot of change. We've seen the number of sports nearly double over the last three Olympic Games. It's had a profound impact on the overall flavour of the Games, but in a positive way. The interesting thing is the Canadians started this fire. The Canadians, back in '88, started introducing as a demonstration sport short-track (speed-skating), freestyle and curling. Now, those are three of the main now-classic pieces that bring the spice and flavour — not that the other things aren't — but since then we've seen snowboarding come in and there's proliferation of new disciplines as well. The winter portfolio has grown significantly and created a great bridge to the new thinking and the new culture that's out in the world that's more street, but it's maintained its classic roots as well. It's a very interesting dichotomy we have on the winter side.