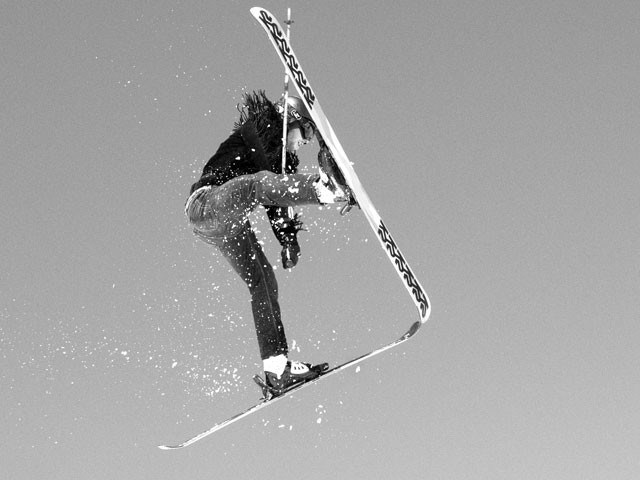 Old School Frank Raymond of the victorious K2 "Spread Eagles" team shows the crowd what it's all about at the Orage Masters this past Saturday. Photo by Ian Robertson, www.coastphoto.com

The Orage Masters has been given a lot of nicknames in its five years, from the anti-comp to the bro show, but as always the sidelines were the place to be for spectators to see the progression of the sport of freeskiing.

The fifth annual Orage Masters took place Saturday, April 12 on a terrain park built just above the Glacier Creek Lodge. The park included rails, hips, and a pair of huge ramps that led into a bottom section that included a step-up jump, a wall ride, and a pair of rails.

Athletes competed under the banner of their ski sponsors in teams of four, with one female member on each team, and made lap after lap of the course. The teams and a panel from Orage judged from the bottom. The winners were chosen by the athletes themselves.

Each team had a costume. Team K2, the eventual champions, dressed like bikers in leather jackets and competed under the banner of the Spread Eagles. Team Dynastar, the runners up, dressed as Vikings and went under the name Pillage the Village. Team 4Front, a semi-finalist, paid homage to current events and dressed as Tibetan Monks, while the other semi-finalists, Team Armada, dressed as characters from Star Wars.

The winning K2 team included 15-year-old local skier Sean Pettit, who went bigger and bigger as the day wore on to energize his team through 20-minute semi-final and final jams. His teammates were Frank Raymond, Sean Decker and Ana Segal.

K2 athletes took home $15,000, plus bragging rights, for their performance.