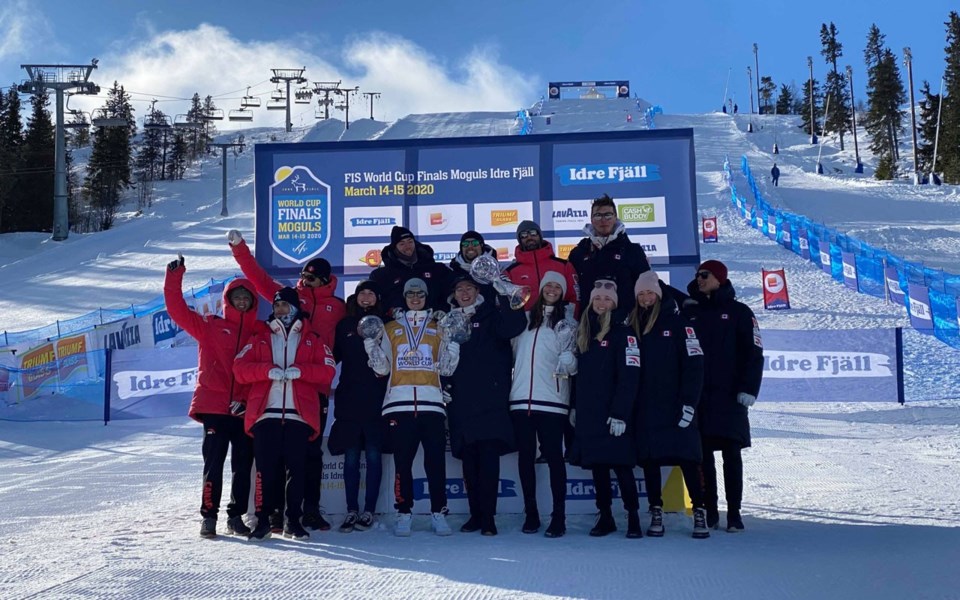 On the hill, the past month or so had been the best of Brenden Kelly's career.

In four FIS World Cup competitions from Feb. 8 to March 7, the Pemberton moguls skier hit the top 10 a perfect four times. The run started with a seventh in dual moguls at Deer Valley, Utah before resulting in three consecutive 10th-place showings, in moguls at Tazawako, Japan and in dual moguls at Shymbaluk, Kazakhstan and Krasnoyarsk, Russia.

The 24-year-old stressed that despite being able to follow the lead of fellow Canadians such as World Cup career wins leader Mikaël Kingsbury and Philippe Marquis during his career, he needed to develop his own approach and embrace his unique talents.

"I really made a big breakthrough in Deer Valley with that big seventh-place result. Speaking with my sport psychologist, [Dr.] John Coleman, he really helped me realize that I have to ski the way I want to ski and stop trying to look like Mik or Phil or any of those top guys that I always looked up to," he said. "I came to the realization that I am at the point in my career where I can be myself on the hill and I can ski my own run. It doesn't have to look or feel like anybody else's."

Kelly's strengths admittedly lie in his jumps, which he focuses on executing perfectly every time out, while he's focused on speeding over the moguls. However, some venues serve his style better than others.

"Every single week, we change courses and the limitations that the FIS put on the courses are very broad. From event to event, you're seeing drastically different pitches in the courses—different jumps, different landings," he said. "One of the beautiful things of moguls skiing is you can never get too comfortable, but that's also one of the biggest challenges. You only have two-and-a-half hours to figure the whole course out before you're competing.

"Japan, for example, was a little on the flatter side but [with] really, really well-constructed moguls and tricky jumps. Then we arrived to Kazakhstan and it was bulletproof ice, really small moguls and super challenging. You had to dig deep for all the little technical things we can focus on because, for the most part, you're just trying to make it down in one piece."

Kelly was looking to go for five in a row to wrap the season at Idre Fjall, Sweden this past weekend, but the contest was cancelled as a precaution to limit the potential spread of COVID-19.

Speaking from home in Pemberton on March 15, Kelly recounted his difficulty moving up his flights in light of the cancellation. His itinerary took him from Norway to Amsterdam to Toronto to Vancouver.

"I'm wickedly tired. I booked on points, so I had to find a points way home and ended up with about 17 hours of planes. Then, with the quarantines and the scares, I had to come back to Pemby last night after I landed, so it was a three-hour drive from the airport," he said. "It was quite a mission."

Being in countries that were feeling the virus' effects more acutely than North America was at the time gave Kelly some insight into how it was being handled in various locations. He noted that officials considered cancelling the Tazawako contest entirely (the dual moguls event was called because of weather), and generally found more precautions as he came back west, starting in Kazakhstan when officials came onto the plane before team members disembarked, taking the temperature of each and every passenger.

"That was a pretty crazy thing to see, guys dressed up in hazmat suits holding you hostage on the plane, making sure you're healthy enough to enter their country," he said. "In Russia, we had to have our temperature taken every morning before the event to be able to leave the hotel. There were definitely some eerie, unsettling moments on tour.

"Ironically, Sweden was business as usual. We came out for training on the first day and it wasn't until after the first day of training that they cancelled the whole event."

Though the event was cancelled, the Canadians were honoured with the Nations Cup for both the moguls discipline and for freestyle skiing as a whole.

Kelly said he dedicated his recent results to Brayden Kuroda, a fellow Canadian moguls skier who died suddenly on Feb. 17 at the age of 19.