Sandra Walter first woman across line at Squamish mountain bike race
May 12, 2013 1:00 AM By: John French 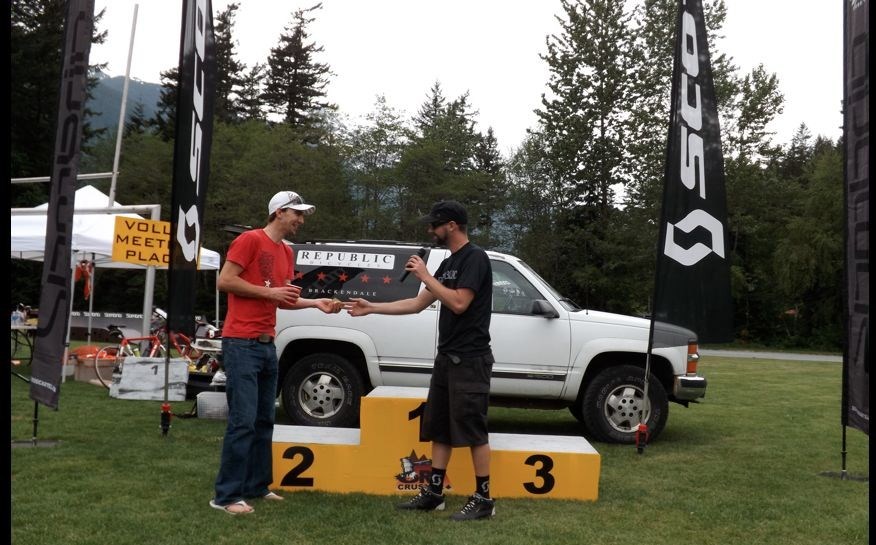 KEEPER FOR KINDREE Squamish’s Neal Kindree made it three in a row by winning the 2013 Ore Crusher. He accepted a $100 bill from race director Armand Hurford for winning an on-course prime. Photo by John French

The mountain bike season has begun and it started much like it finished last season. Neal Kindree won all of the major mountain bike races in Squamish last year. This was Kindree's third Ore Crusher win in as many years.

Kindree’s winning time was one hour, 49 minutes and 19 seconds. Sneddon followed just under two minutes later while Moberg clocked a time of 1:53:24.

Sandra Walter was the first woman across the line in 21st place overall with a time of two hours and five minutes. Walter was followed seven minutes later by Jean Ann Berkanpas.

Kindree said after the race that once Day took the first prime and the race for the first $100 on-course prize was claimed he started powering up his race. Sneddon and Kindree swapped the lead a few times in the first half of the race.

“Once I took the lead I was focused on applying myself effectively,” said Kindree. He used a series of accelerations to wear down Sneddon.

At the finish, Moberg said he had Sneddon in sight for the first lap but the gap between second and third opened in the second lap.

“I rode most of the race on my own,” said Moberg.

The race route passes by the cemetery in Squamish and Moberg said his grandparents are both buried there so for inspiration he said he rode the race with pictures of his grandparents in one of his pockets.

“I miss them a lot,” said Moberg. “It has been three and four years since they died and I think about them a lot.”

Walter said she rode the race on a hard tail bike last year and after that experience she vowed not to ride Ore Crusher again without a dual shock bike.

According to the pro-elite racer, the course beats her up every time she races it.

“I think this particular course is very unique,” said Walter.

She noted that Ore Crusher doesn’t have any significant climbs and that means there aren’t any downhill sections where riders can take a break from pedaling.

Check back for video highlights at piquenewsmagazine.com and more details in the print edition on Thursday.