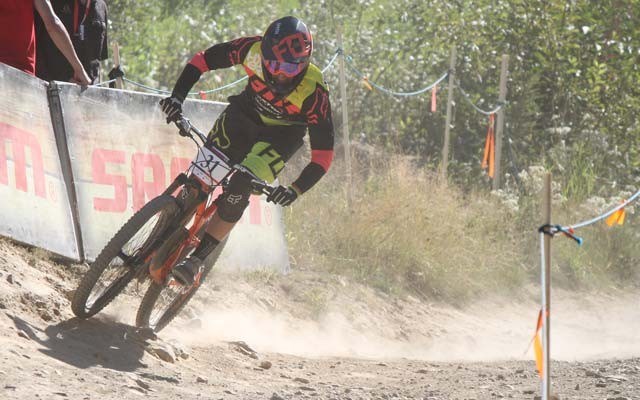 With three consecutive wins in the Fox Air DH, no one could say Jill Kintner was coming in slyly.

But even with a target on her back, the Bellingham rider still couldn't be topped, nabbing the pro women's title for a fourth year in a row on Aug. 17. Kintner bested runner-up Tracy Hannah of Australia by 3.88 seconds and third-place finisher Vaea Verbeeck of North Vancouver by 5.02 seconds.

"That's pretty cool. Maybe it means once you've figured it out that you've got it, but it definitely didn't feel like that near the start. I was a little bit nervous and I was unsure which bike was faster, but I rode the trail bike when it was even rougher than I've ever seen it," Kintner said.

Of her four wins, Kintner wasn't necessarily quite as enthused with the 2016 result as some of the others, but even with the flubs, finishing nearly four seconds up on the competition is nothing to sneeze at.

"My run was not perfect, but fast enough, so that's all we need," she said. "I was overshooting things and (there was) the bike difference, but I feel like I enjoy this race and I'm in the start smiling and happy to be here."

Hannah, meanwhile, stressed the importance of taking risks on the downhill course as it's hard to be conservative and win with riders like Kintner on track.

"We just come here to have fun and ride. It's good to have someone to aim for every year and I feel like I'm getting closer, so she'd (Kintner) better watch out," Hannah said with a chuckle.

On the men's side, Kelowna's Bas Van Steenbergen pulled out the win by 0.99 seconds over Great Britain's Harry Heath and by 1.72 seconds over Australia's Mick Hannah.

As a relatively early rider to drop, Van Steenbergen had to wait, and wait, and wait before confirming the victory was officially his.

"It was nerve-wracking. It wasn't the greatest," he said. "I'd rather drop a little bit later next time."

While Van Steenbergen admittedly didn't envision coming away with the gold for his first Crankworx win, he was confident he could put up a strong time and let the chips fall where they may.

"I was feeling pretty good. I definitely didn't think I was going to win, but I was feeling good on my bike and I guess I had a good run," he said.

Heath, who announced that this year will be his last as a pro mountain biker on Instagram earlier this month, felt strong leading up to the race and it carried over.

"Practice was probably the most positive I've felt on my bike all year. I was just flowing, had good rhythm and was really enjoying it. The race run, I did the same," Heath said.

In the previous day's race, the Garbanzo DH, Squamish's Miranda Miller led the women's podium, followed by Hannah and Whistler's Claire Buchar while Colombian Marcelo Gutierrez Villegas captured the men's event for the fourth consecutive year, with Sam Blenkinsop and Jack Moir rounding out the podium.