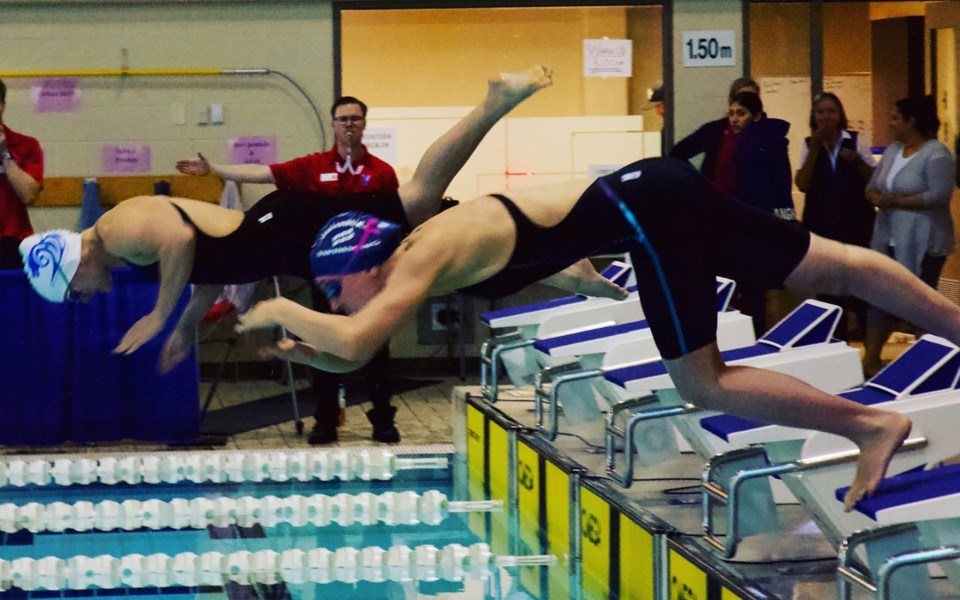 DIVING IN Kat Kranjc will compete at the 2020 Olympic Trials in Toronto next spring. <ParaStyle:CUTLINE\:CUTLINE Credit>Photo submitted

Kat Kranjc is a step closer to the 2020 Summer Olympic Games in Tokyo.

The 20-year-old local swimmer won the 50-metre freestyle eliminator at the Thompson Rivers University Wolfpack Invitational in Kamloops from June 7 to 9, punching her ticket to the Olympic trials in Toronto next spring.

Kranjc said her expectations weren't high for this meet, as she experienced some chest pains in April, which cut into her training. When she was cleared for activity, she opted for CrossFit in addition to her pool time.

"It was pretty exciting based on the amount of training I've been doing. I really did not expect, going into that meet, to have any personal bests. That was definitely a huge surprise," she said.

In the race itself, Kranjc said her reaction time off the block was key as she rocketed to victory over her rivals.

"It was significantly faster than what I normally did, and everyone was saying I was a body length ahead off the start," she said. "It's the key. If you're slow off the blocks, your race is over."

Earning the opportunity to go to trials was especially meaningful to Kranjc given how her schedule lines up. Competing with the University of Western Ontario Mustangs, all of the events are short-course aside from the national U Sports Swimming Championships. Qualifying times, however, must be recorded on long courses.

"My opportunities were actually really slim because you can only qualify long-course, and most of our university (races) are short-course except for the one in February," she said. "I would have had only one opportunity between now and next April, so it's nice to get it out of the way."

Younger members of the Whistler Seawolves Swim Club were also in action in Kamloops. Highlights included Macy Kercher qualifying for the provincial championships in the 15-and-over 50-m freestyle and Robyn Minton earning a trio of fourth-place finishes in the 50-m breaststroke, 50-m freestyle and 100-m freestyle.

Kranjc was thrilled to race alongside her former teammates and credits them for the final boost she needed to secure her accomplishment.

"Being there and showing them that it's possible gave me that final push," she said. "I'll give them a little thank-you."

Looking back on her sophomore season with the Mustangs, Kranjc was thrilled with how she kept momentum from her strong rookie campaign and kept moving forward. She said she focused on technique in both the pool and the gym, which helped her increase her strength while also refining her motion in the water.

"I had a great first year and I wasn't sure that the second year was going to be just as big of a jump," she said. "That was another impressive season for me."

Kranjc nearly qualified for the Olympic trials at the U Sports Championships, but missed the time standard by just 0.07 seconds. Still, she was 14th and 16th in the nation, respectively, in the 50-m freestyle and 50-m butterfly.

She's eager for her third season in London and, eventually, the trials themselves from March 30 to April 5, 2020 in Toronto.