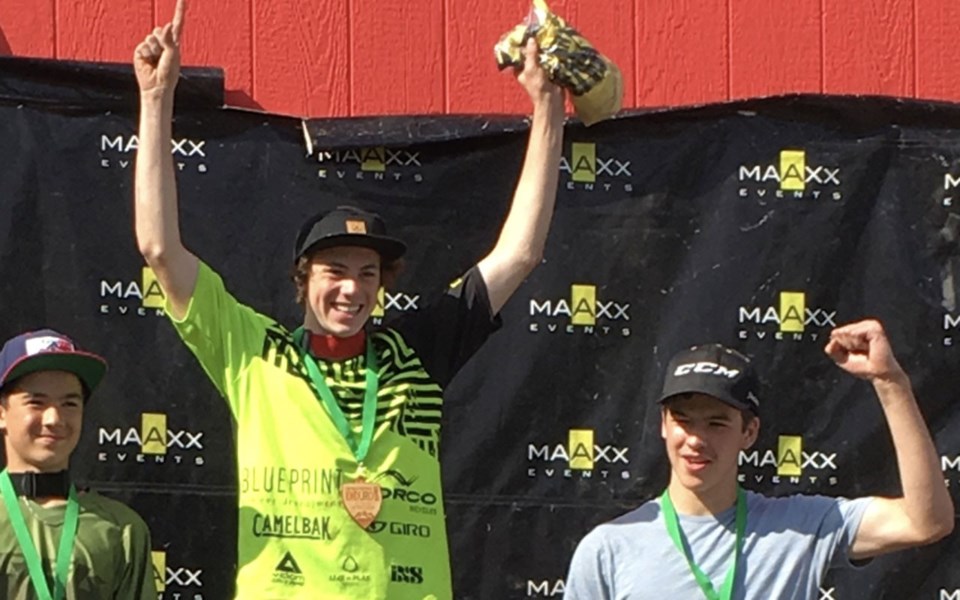 With the men's 16 to 20 overall title on the line on Sunday, July 29 in Bromont, Que., second place wouldn't cut it. Krasny needed a win, as leader Jacob Tooke was inactive for the race.

To his advantage, though, was that he did just that a year ago at the same venue.

"Saturday, I had a bit of pressure thinking about it. It was the last race of the series and I can't lose second place overall, but to get first, I have to win the race," he said. "At night on Saturday, I was trying to dial in my lines, watching GoPro footage and visualizing my lines."

Krasny has raced the CNES for four seasons now, but has fallen just short of claiming this crown. He was third last year and second the year prior, which added to the fire in his belly.

Fortunately for Krasny, Stages 2, 3 and 4 were retreads from last year's course, which favoured the defending champion. It was Stage 1, however, that he enjoyed the most.

"Stage 1 they made more like a downhill race. There was not a lot of pedalling; it was just straight down the mountain on the hardest, gnarliest trails," said Krasny, who won all five stages in a total time of 18 minutes and 12 seconds. "It was really fast and fun, and that was definitely my favourite stage, for sure. It had a lot of rock-garden sections where you had to choose a good line or otherwise, you'd get bucked around."

Another boost for Krasny came with some precipitation in the days leading up to the race, creating some tacky trails and giving the West Coaster a little taste of home on the other side of the country.

"Talking to some of my friends that live out there that are racing, they were saying how they hadn't had rain all summer. Then I show up and it starts raining for the race," he said. "Racing all summer was dry and it was really nice to have a change and get some wet trails."

And even with the changing conditions, Krasny said he made the most of his prior knowledge, cutting his times drastically compared to 2017.

"Once you learn the track once, you don't really forget it," he said. "I was excited they were the same stages because then I could compare my times to last year and see my improvement.

"On Stage 2, compared to last year, I was 30 seconds faster, so being bigger and stronger, I notice it now (after) seeing the times."

Next up, Krasny will race at the CamelBak Canadian Open Enduro as part of Crankworx here in Whistler on Aug. 12. While it hasn't always been overly friendly to race at home, he hopes to take the next step this year.

"The next step is racing more of the (Enduro World Series) races," he said. "Your goal can't be to win it, obviously, since it's a much more competitive series. I'm aiming for the top 10, but really the goal is just to complete the race. It's known to be a hard race that takes down a lot of competitors.

"I've had a lot of mechanicals, so I'm just hoping for a clean race."