Kucera does it again

Silver medal at Lake Louise gets Calgary racer into the record books
Dec 5, 2008 5:25 AM By: Andrew Mitchell 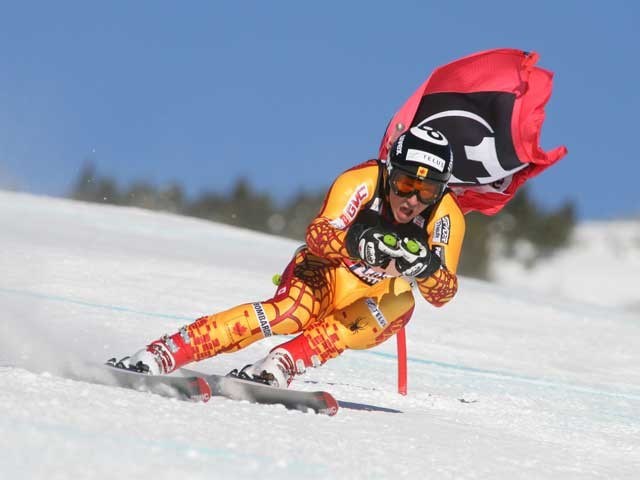 Growing up in Calgary, John Kucera is intimately familiar with the downhill run at Lake Louise, but home advantage has its drawbacks as well. There is more pressure to do well with family, friends and former coaches on the sidelines, with all of the Calgary media focused on his every move, and with the higher expectations he has set for himself.

Kucera is the first Canadian to win gold in super G on Canadian soil, topping the field at Lake Louise Winterstart in 2006.

After a respectable showing again in 2007 — seventh place in downhill and SG — Kucera came into the 2008 races on a mission, making the fastest downhill run last Friday, the last day of training.

He went on to have a disappointing day in the downhill on Saturday — 35 th place — but was back on form Sunday to win the silver medal in SG behind resurgent Austrian legend Hermann Maier.

Maier, once called the “Herminator,” was the most dominant skier in the world until he almost lost a leg in 2001 after a motorcycle accident. He has had strong results since then, including winning the SG and overall World Cup titles in 2004, but has since dropped off the leader board as other Austrian skiers have stepped up. He even considered retiring after last season, but found his groove again while training on glaciers in May.

Kucera, who is 12 years younger than Maier, said it was a privilege to share the podium with a skier he idolized while growing up.

“Absolutely, it’s special,” he said. “Growing up, Maier was one of my idols. It is always good to stay competitive with those guys… like (bronze medal winner) Didier Cuche competing for overalls.”

Kucera has found consistency since his first World Cup win, but did not make a single podium last season despite solid runs in downhill, super G, and giant slalom races. He knew he was close.

“Last year was a really good year, really consistent, but it was just off the podium,” he said. “So it was nice to finally find those couple of hundredths of seconds to put me back on the podium.

“It’s always a great feeling to make it on the podium, whoever it is. We train as a group and we are all competitive as a group. So when you see one of your teammates on the podium you know that anyone could be there on any given day, so it just keeps us hanging in there.”

This was Kucera’s third career World Cup podium, along with the bronze medal he won in Italy in the 2006-07 season.

In the downhill on Saturday, Erik Guay was the top Canadian in 10 th place, while the podium belonged to first-timers. Italy’s Peter Fill earned the first gold medal of his career, Carlo Janka of Switzerland earned his first medal with a silver medal performance, and Hans Olsson was the first Swedish skier to reach the podium in a World Cup downhill by earning a bronze.

Guay pointed to the changing conditions, as the course softened up and skies became overcast, impacting visibility.

“It was all right,” he said. “I think it was my fault more than anything but it was pretty flat light. I should have been ready for that.”

“I came out and top-30 is what I was looking for,” he said. “This is great, I’m really happy. It’s just what I want to do… it’s just one of those steps. I am just trying to keep progressing.”

The Canadian Alpine Ski Team also had its share of bad news on the week after Francois Bourque crashed while free skiing in between training runs. He tore a ligament, and will miss the rest of the season while he goes through physiotherapy, surgery, and more physiotherapy.

Bourque is a solid performer with four career World Cup podiums to his credit, and the ability to race in all disciplines.

While the men’s speed team was off to a strong start at Lake Louise, the women’s technical team resumed its season at Aspen, Colorado.

None of the Canadians qualified for a second run in the giant slalom, with Genevieve Simard coming closest with a 37 th place finish on her opening run. The gold medal went to Tessa Worley of France, followed by Tanja Poutiainen of Finland and Elisabeth Goergl of Austria. World Cup overall champion Lindsey Vonn of the U.S. was fourth.

In the slalom race, where Canada has been weak in recent years, Anna Goodman and Brigitte Acton both managed to finish their opening runs in the top-30 and stay on course in their second runs to place 24 th and 27 th respectively.

“We’ll take today’s result for sure. It’s definitely a step in the right direction for the technical team,” said ladies technical team head coach and Whistler resident Jim Pollock. Pollock has spent the last few years coaching the U.S. women’s team, and is credited for strong results by skiers like Vonn.

“Anna is skiing really well this year,” he added. “As coaches we know that she has had good training this summer and can improve as we move forward this season.

“It’s also a great day for Brigitte. She stepped up to qualify from the back and skied well.”

Shona Rubens almost made it three in the top-30, placing 35 th after the first run.

The first-timer theme was also on display in Aspen, with Sarka Zahrobska of Czech Republic earning the first World Cup win of her career. Podium regulars Nicole Hosp of Austria and Tanja Poutiainen of Finland were second and third.

The men’s and women’s teams crossed paths mid-air last week, with the men heading to Aspen and women to a pair of downhill races and a super G at Lake Louise.

Whistler skiers will be in the spotlight, with Britt Janyk defending last year’s bronze medal on the downhill course and her brother Mike Janyk returning to the slalom after missing most of last season with a back injury.

The Canadian Alpine Ski Team announced its roster on Monday for the World Cup women’s speed events at Lake Louise this weekend. There are two downhill events scheduled, and one super G race.

The team will be led by veterans Emily Brydon and Britt Janyk, both of whom won World Cup medals last winter. Kelly Vanderbeek, who was injured part of last season but earned a bronze at Lake Louise Winterstart in 2006, is also in the lineup.

There will be six Canadian racers in each of the two downhill events, as well as six in the super G. All three races will be broadcast on CBC, with the downhill races getting underway at 2 p.m. Pacific, and the super-G at noon.