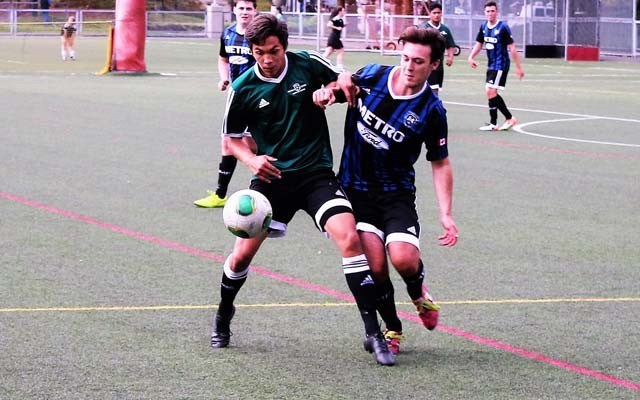 Tyson Stager has made a major commitment to soccer.

For his dedication, the 18-year-old Lil'wat Nation member accepted a Premier's Award for Aboriginal Youth Excellence in Sport for the Vancouver Coastal region in the city on Nov. 17. Vancouver-False Creek MLA Sam Sullivan presented eight awards in total at the Vancouver Aboriginal Friendship Centre.

"It was great. It was unexpected. I didn't really know about it until my parents told me," Stager said. "I went to the ceremony and it was really great with all the dancers and speeches, they were all awesome."

Stager said his parents told him about two weeks before the ceremony that he'd been nominated by Lil'wat recreation manager Alphonse Wallace.

Stager, a centre-midfielder, currently suits up for Sarajevo FC in the U21 division of the Vancouver Metro Soccer League, where he leads the team with five goals. He got connected with the team through its head coach, Amar Talic, who also instructs at the European Football School, which Stager has attended since 2011.

"His dedication to soccer has been second to none, to be honest," Talic said. "He comes from Mount Currie all the way down to the Lower Mainland three to four times a week."

Though Stager has a nose for the net, he wouldn't say that's his top attribute as a player.

Stager holds that attitude, in part, because he's been asked to play all over the field. He's played positions like centre-back, which have a greater emphasis on defending, but Talic reasoned he's best used as a scorer.

"He's a kid that has a lot of great soccer abilities. He can play any position and he has played all over," he said. "Due to his great knowledge of the game and understanding and great vision, I like to play him more as an attacking mid. I've been giving him that role the last couple years and he's evolved into a more creative (player) with more attacking ability in regard to assisting goals and scoring."

In January, Stager will cross the pond to the Netherlands to try out for a couple of clubs. He is hoping to make some connections as he looks to launch his professional career.

It'll be old hat for Stager, as he's gone overseas for tours with the European Football School on multiple occasions, including a journey all over the continent.

"The first tour, we went to six different countries. We went to Slovenia, Croatia, Italy, Germany, Austria and Switzerland," he said. "We had games almost every other day."

Stager enjoys heading over to Europe, especially as it allows him to pick up little tidbits of how the Europeans play, which he is then able to apply to his own game.

"It was definitely a learning experience. Soccer is in their blood," he said. "One thing I noticed while we were there watching them and playing against them is they move the ball really fast. They do one or two touches and then they move the ball to the other side. That's one thing I always liked and try to get better at."

Talic noted though he likes Stager as an attacker, he's talented enough to act as a rover and can play wherever he's needed, which should help him latch on with a club.

"In the right club and the right kind of frame, he could succeed in soccer over there. That all depends how he takes it now," Talic said. "It's not easy for a kid coming from Canada to go play in Europe, but if he's given the right opportunity, he can definitely succeed because he's a player that understands the game well.

"I'm not too worried about him trying to fit there."

Stager, who graduated from Xetolacw Community School in June, was named the school's male athlete of the year and also earned the Maisie Mernett Bursary.

"He's a kind, understanding kid. He'll never argue or talk back and is a really polite kid," Talic said. "He really is a role model to First Nations kids and they should be really proud of him up in Mount Currie."

The Premier's Awards honour athletes under the age of 25 who not only excel in sport, but are also recognized as leaders, are committed to higher education and are role models in their communities. The Aboriginal Sport, Recreation and Physical Activity Partners Council, collaborating with the provincial government, launched the nomination process in December.

Across the province, 47 regional winners were chosen from over 130 applications. All regional winners are finalists for the provincial awards, which will be selected in January and given out at the Gathering Our Voices National Aboriginal Youth Conference in Kelowna in March. Six male and six female recipients will be honoured.