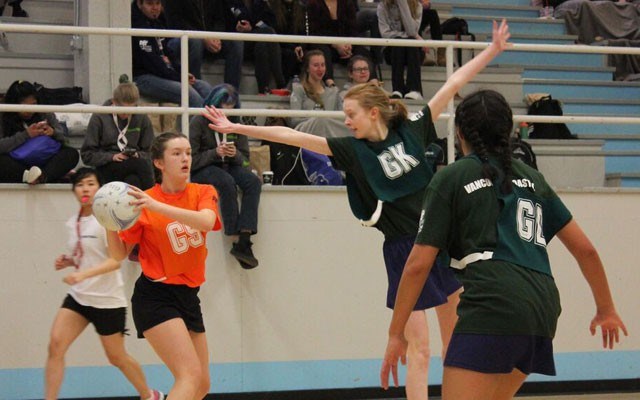 Kai Smart looked like a downright genius at the B.C. Winter Games in Penticton from Feb. 25 to 28.

The 13-year-old won gold in the youth slopestyle, big air and combined events while taking silver in the moguls.

Though he's generally a contender at most events he attends, Smart acknowledged with several other suitors for medals, he'd need to be at his best.

"I was a little nervous because of all the competition. I was training hard and just wanted to put a run down," he said.

Smart was particularly enthused about his slopestyle triumph, as his fellow competitors seemed to be having everything go according to plan.

"There's lots of competition, a lot of athletes putting down good runs," he said. "(I was happy to land) the last two tricks, the switch rodeo and the cork (720)."

The medals were a boost for Smart, who still has a couple major events left on his 2015-16 docket — Junior Nationals in Beaver Valley, Ont. from March 15 to 20 and the B.C. Freestyle Timber Tour championships from March 30 to April 3.

Fellow freestyle skier Michelle Macpherson won big air gold along with fourth-place finishes in the juvenile moguls and combined and a sixth in the slopestyle.

"I usually get second in it, so I was really happy that I got first," she said. "I was just doing a truck driver grab. I was going to spin, but I just wasn't really feeling like it that day."

Macpherson, 14, had to battle through a bit early on, hurting her leg on an awkward fall going into her first event, the slopestyle. However, she felt better for the remainder of the weekend.

"I didn't have my best run (in slopestyle) but I was able to get better throughout the weekend," she said.

Even with the early frustration, Macpherson sought to tough it out and improved over the course of her time in Penticton.

"I was just trying my best at keeping a positive attitude and listening to what the coaches had to say," she said. "I was kind of nervous but I was just trying to calm myself down, think about my run and what I was going to do."

Skye Clarke took gold for youth big air and combined and silver in moguls and slopestyle, while Maya Mikkelson won the moguls event and took second in big air, and Josephine Howell won gold in slopestyle and bronze in combined. As for the youth boys, Ben Lynch nabbed silver in big air.

In the juveniles, Jessica Linton took the combined gold after silvers in slopestyle and big air and bronze in moguls, while Sam Cordell took the silver in boys' moguls.

Lydia Jensen switched it up to help her team.

Though she was primarily an offensive player playing netball at home in Brisbane, Australia, the 14-year-old felt right at home in her new position as goalkeeper on the Vancouver-Coastal team.

"I think my playing style changed when I came here," she said. "I enjoyed playing goalkeeper while I was here.

"You have to be very assertive... There's not a lot of running but it's a lot of defence, a lot of jumping, a lot of blocking and a lot of waving your arms over the ball."

Head coach Careene Andrews was impressed with Jensen's height and tenacity around the net.

"Coming here, she performed extremely well in the defensive end because she was so tall. She needed to adjust positions because of her height and the way she performed," Andrews said. "She's... one of those defensive players that does not let her player get the ball or does not want her player to get the ball. She just sticks on them Australian-style."

Though one of the younger team members, Jensen was a centrepiece of the squad, which was undefeated en route to gold.

The gold medal game was a nailbiter, however, as two-time defending champion Fraser River put up a valiant fight. But Vancouver-Coastal overcame a deficit to force overtime and eke out a 36-35 win. Andrews said it was a stressful match.

"It was very good in terms of the audience. It would have been exciting for them. Not as exciting for the coach," Andrews chuckled. "They did extremely well to manage the pressure of the situation because that will certainly only help them in the long run."

However, Jensen explained even though the game was forced into overtime, she felt her teammates were going to walk away with the gold.

After being named to the team, Jensen attended training every Saturday in Burnaby to prepare. It was difficult for the squad to coordinate its schedules, and the only full practice the team had all 10 members was its final one before the Games.

Jensen and her family moved to Whistler for the year as her father, a pilot, chose a temporary Vancouver home base.

All in all, the Vancouver-Coastal region placed second in the medal table with 105 medals, just two behind Fraser River. Of those, 35 were gold.

Several other athletes from the Sea to Sky region hit the podium.