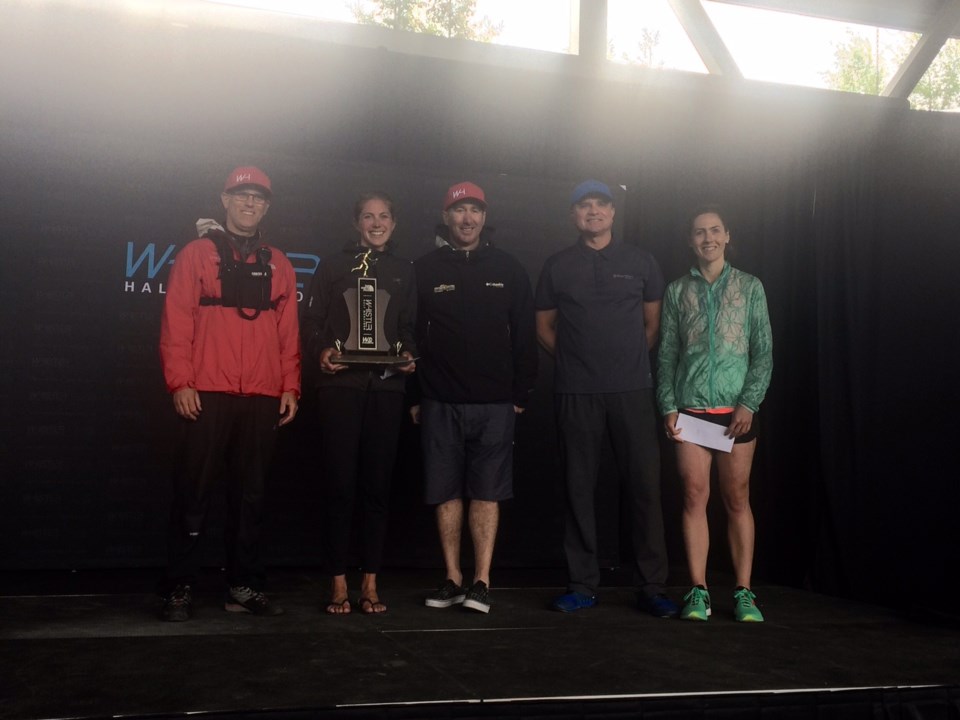 Entering the Whistler Half Marathon’s 30-kilometre race was an 11th-hour decision for local Claire Daniels that evidently paid off big time.

The 31-year-old only committed to running the event’s first-ever 30K distance last week, but the lack of preparation didn’t hurt the Whistlerite’s chances on Saturday, June 3, after she finished more than five minutes ahead of second-place finisher, Victoria’s Kyla Beattie, in a time of two hours, 14 minutes and 10 seconds.

“30K is definitely an interesting distance,” Daniels said. “I didn’t really know what to expect, so I was just trying to keep my normal half-marathon pace for the 30K and see how that felt on the trails.”

The prospect of running the picturesque Lost Lake trails this year — terrain she’s well acquainted with — was a challenge that Daniels couldn’t pass up. Of course, having a home-course advantage didn’t hurt either.

“It’s a benefit to have so many people cheering you on,” she added.

Rounding out the women’s category in the 30K was Vancouver’s Devon McGuire, who crossed the finish line at 2:27:39.

In the men’s division, it was Vancouverite Nick Williams who topped the podium, finishing well ahead of the pack at 2:03:02. Michael Stobart of North Vancouver was six minutes off the pace, earning a time of 2:09:02, while Richmond’s Humphrey Chau claimed third in 2:11:13. The top Whistler racer was Shane O’Connor, who came in ninth with a time of 2:21:32.

The inaugural 30K race attracted a healthy response from runners, with well over the initial goal of 100 racers signed up to hit the starting line this weekend.

Marilyn Arsenault may want to consider the 30K in 2018 after she claimed her third women’s Whistler Half Marathon title in a row on Saturday.

“I’m toying with the idea of doing more trail racing as opposed to road racing, because I’m getting up there, I’m 49,” she said. “I might switch the focus a bit just to find new challenges… I’m not getting any younger.”

Approaching the half-century mark hasn’t appeared to slow down Arsenault quite yet. The Victoria resident clocked in at 1:25:13, good enough to claim the women’s title and the eighth-best overall time of the day. She bested fellow Victorian Care Nelson, who finished at 1:26:54. Vancouver’s Lori Durward nabbed the final spot on the podium with a time of 1:29:06, while Whistler’s own Marion Pele was the top local in fourth place at 1:30:35.

On the men’s side, Adam Way of North Vancouver eked out a close victory in the half marathon with a time of 1:19:20, beating Paul McNamara, also of North Van, by just 25 seconds. Garibaldi Highlands’ David Roulston grabbed third at 1:20:30. The top Whistlerite was Mark O’Connor, who finished seventh overall with a time of 1:25:07.

Now in its seventh year, the Whistler Half Marathon's slew of events saw the strongest registration numbers ever in 2017, with over 2,000 participants signed up.

$5 from every race registration will go towards Crohn's and Colitis Canada, while runners also collect money individually for the cause. Clark said over $20,000 had been raised as of last week, with the goal of pushing that number over $25,000 by the time the event wraps.

For the full results from the Whistler Half Marathon, including the winners of the 5K and 10K distances, visit https://racedaytiming.ca.

Pick up Pique this Thursday for the full story.