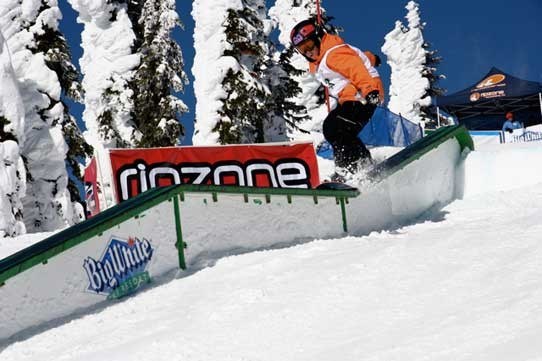 The top up and coming riders from across the country converged on Big White last weekend for the conclusion of the Ripzone Provincial Snowboard Series, which are also the B.C. Snowboard Association’s provincial championships.

The first event, on March 3, was the slopestyle. In the women’s category, the only Whistler athlete was Chelsie Mitchell, who rides for the First Nations Snowboard Team and sponsors Evolution and Whistler-Blackcomb. She earned the bronze medal in the 19 and Over category behind Alberta riders Mya Chaput and Kendra Scurfield.

For the men, the Whistler Valley Snowboard Club’s Brin Alexander won the Men’s 12 and Under category by almost four points. Jonathan Redman, who is also with the First Nations Snowboard Team, finished second in the Men’s 19 and Over group to a strong rider from Ontario.

In the FIS halfpipe the next day, Katie Tsuyuki of Squamish took the gold medal with a gap of over 11 points. Tsuyuki is a member of the provincial team.

Jonathan Redman competed in the men’s event, where he was eighth overall.

In the non-FIS halfpipe contest, Brin Alexander had another good day, this time finishing second in the 13-14 age group by one-tenth of a point.

In the men’s FIS snowboardcross, Whistler’s Don Schwartz and Adam Livingstone were first and second overall.