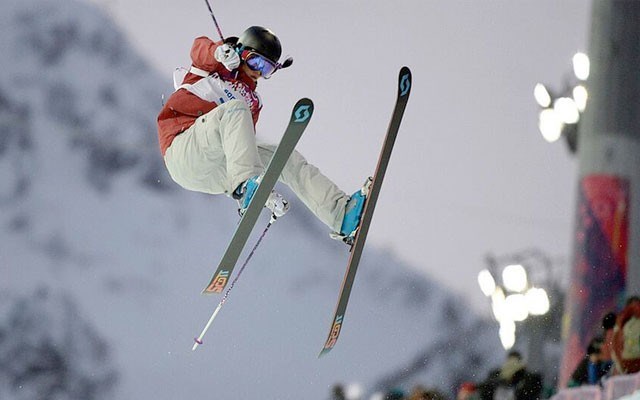 Squamish's Roz Groenewoud had to do a little extra work to make the Dew Tour final, but managed to keep climbing once there.

Competing in Breckenridge, Colo., Groenewoud placed eighth in the women's freeski superpipe semifinal with a 64.00 on Wednesday, Dec. 10, missing the cut by just 0.5 points. She had a chance for redemption later that day in the last-chance qualifier, boosting her score to a 73.00 to qualify for the Dec. 12 final. Once there, she clawed out a 75.50, last among the six competitors and 15.75 points behind winner Maddie Bowman.

The other local in the event, Whistler's Cassie Sharpe, was 10th in the semifinal after putting up a 62.50. She then struggled in the last-chance qualifier, with just a 23.25 to finish eighth.

The local men competing in the freeski superpipe suffered some regression after strong starts. In the semi, Whistler's Simon d'Artois shook off a tough first run to power through to the final with an 87.25, good for fifth. Squamish's Mike Riddle also made it through in sixth, just 0.5 points back.

In the final, Riddle slipped to posting a best run of 80.00, which placed him ninth. Meanwhile, d'Artois again struggled on his first run before improving to 63.75 and ending up in 11th.

Whistler's Justin Dorey had trouble in both runs, posting a best run of 36.75 and finishing 24th after the semifinal.

In the women's freeski slopestyle semis, Whistler's Yuki Tsubota placed 10th after notching a 65.75. She then placed third in the last chance qualifier with a 70.25, 6.5 points back of Kim Lamarre, who moved on.

In the men's snowboard slopestyle semifinal, Whistler resident Darcy Sharpe posted a 44.25 to end up 23rd.

As Canadian lugers on the junior circuit rack up the golds, they now have someone on the senior loop that can match them.

Sam Edney, became the first Canadian to win a men's World Cup race. The 30-year-old Calgarian completed the feat on Dec. 13 when he slid onto his first ever FIL World Cup podium with a time of 46.146 seconds. Race organizers decided to strike the race's first run from the books because of changing weather conditions, but Edney, who also posted the best time in that heat, was undeterred.

He held off Olympic champion Felix Loch of Germany by 0.109 seconds.

Alpine Canada's representatives at this weekend's competitions missed out on the Top 10.

In the women's slalom on Dec. 13, Lac-Etchemin, Que.'s Marie-Michele Gagnon narrowly missed out, placing 11th with a 1:44.75, which was 1.10 seconds behind winner Marie Pietilae-Holmner of Sweden. Collingwood, Ont.'s Erin Mielzynski was 21st with a 1:46.64, while St-Saveur, Que.'s Marie-Pier Prefontaine and Mont-Tremblant, Que.'s Brittany Phelan did not qualify for a second run.

Prefontaine, meanwhile, was the top Canadian the previous day, finishing with a 2:26.56, ending up 2.72 seconds behind winner Tina Maze of Slovakia. Gagnon, meanwhile, did not finish her first run.

In the men's slalom on Dec. 14, Calgary's Erik Read was the only Canadian to earn a second run. Read ultimately finished 24th with a 1:43.54, which was 2.83 seconds back of winner Marcel Hirscher of Austria. Teammates Julien Cousineau (Lachute, Que.), Trevor Philp (Calgary) and Phil Brown (Toronto) also competed.

On Dec. 12, only Brown qualified for a second run in the giant slalom, as he ended up posting a 2:37.81, finishing 7.63 seconds behind winner Hirscher.

Ottawa resident Dustin Cook and Read failed to qualify for a second run, while Philp did not complete his first run.

The Whistler Avalanche U15 boys' rep soccer team rolled over its competition in Squamish over the weekend.

Facing West Vancouver United on Dec. 12, the Avalanche stonewalled their way to a 6-0 win en route to keeping their Pioneer Cup and Provincial B Cup hopes alive. The Avs now move on to semifinal play, which resumes in 2015.

The Avalanche were promoted from the 4 District League's second division to its first division after fighting through the first portion of the schedule.

The 2015 Giro as part of the RBC GrandFondo Whistler will be much more lucrative in its sixth running next September.

Organizers announced on Dec. 10 the purse for the upcoming event would be $50,000, including a $15,000 top prize for both the top male and female finishers. The top 20 competitors in each event will receive a prize. Riders in the Giro must have a valid UCI road racing Category 1, 2 or 3 license.

The 122-km ride, which begins in Vancouver and ends in Whistler, will take place on Saturday, Sept. 12.

Options for non-licensed riders are also available, including the Giro route to Whistler, a 67-km ride to Squamish, or a 152-km ride to Whistler that has a 30-km detour to the summit of Cypress Mountain.

SnowPasses available for Grade 4 and 5 students

Those with young ones interested in skiing and snowboarding have an affordable option to satisfy some of those snowy needs.

The Canadian Ski Council is offering its SnowPass for those in Grades 4 and 5 (2004 and 2005 birth years). The pass, which is available for $29.95, entitles kids to three runs at each of the organization's 150 participating resorts across the country. Whistler Blackcomb and Whistler Olympic Park both take part in the program.

To fill out a form or for more information, visit www.snowpass.ca.