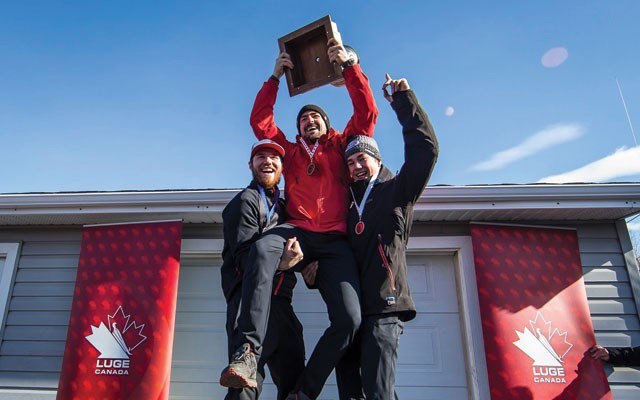 The doubles luge team of Whistler's Matt Riddle and Pemberton's Adam Shippit took second at the Canadian Luge Championships in Calgary on Oct. 14 while Whistler's Reid Watts was third in the men's event.

Riddle and Shippit were up against veterans Justin Snith and Tristan Walker, placing 1.85 seconds back.

Watts, meanwhile, was in the middle of the singles field, placing behind longtime racer Sam Edney, who took the top spot, and Mitchel Malyk in second. Watts was 0.096 seconds off Edney's pace.

Edney credited the younger racers with giving him a challenge as the season is set to get underway in Austria next month.

"It's nice to get back into that racing atmosphere after a great week of training. The other boys put the pressure on me today, so it was nice to have some of those race nerves," Edney said in a release. "An early race like this is important for us to not only feel some of that atmosphere up in the start-house, but it is also important to get the equipment dialed in. That has been a big thing for us this fall so I was happy I was able to do that and have the consistency in both runs to get the win."

"It was good to see how well some of the younger girls are developing. Our Canadian Championships are now definitely more competitive and that is nice to see those girls challenging Kim and I," Gough said in a release.

On the same day, the Calgary track hosted the Canadian Skeleton Championships.

On the women's side, Elisabeth Vathje of Calgary scored the win over Ottawa's Mirela Rahneva and Jane Channell of North Vancouver. Channell, whose home track is the Whistler Sliding Centre, posted the fastest start in both heats.

The Canadian by way of Australia reached a top speed of 154.5 km/h during a run on Oct. 11 to break the previous mark set by fellow Canuck Nick Poloniato by just under a kilometre per hour.

Joining Spring in the sled were Alex Kopacz, Derek Plug and Josh Kirkpatrick.

In an Instagram post, Spring thanked his crew as well as the Whistler Sliding Centre track staff.