Loutitt set the pace at Squamish 50

Home-town advantage, and the fact that he's training for a 100-Mile race, served Squamish's Jason Loutitt well this past weekend as he placed first in the inaugural Squamish 50 ultramarathon.
Aug 15, 2012 9:00 PM By: Andrew Mitchell 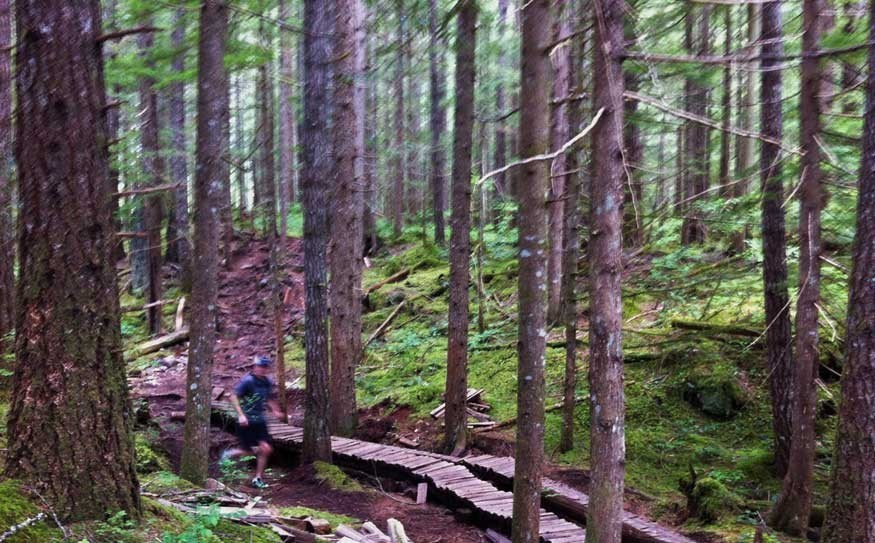 Home-town advantage, and the fact that he's training for a 100-Mile race, served Squamish's Jason Loutitt well this past weekend as he placed first in the inaugural Squamish 50 ultramarathon. Loutitt went the full 50 mile (80km) distance, in a blistering (no pun intended) seven hours, 25 minutes and 22 seconds, averaging a kilometre every 5:35. On the first 10km start to the run he also finished in 37:03 to take the first prime, which is the kind of thing you'd never see an ultra athlete doing on a long day like this.

"I took off right at the start," he said. "For the first 400 metres I ran with Jason Schlard, the American 50-mile champion, but he ended up having some trouble that day after not recovering from a race a few weeks earlier and I was on my own after that."

Loutitt had planned to go to France to race a 100-miler, but decided he couldn't afford the trip. Instead, he's planning to do a 100-miler in Colorado this September instead. In that context, the Squamish 50 was something of a training run.

"It was a fun day for me," he said. "A lot of the trails I do during my training so I could run them with my head up, but there were a lot of new trails I hadn't been on and it was pretty cool to explore some new areas as well.

"I definitely hit a bit of a wall at about the four, four-and-a-half hour mark, and that's really the thing, the reason why I do what I do and why a lot of other people get into ultra running. When it happened to me there was nothing more real to me than the fact that I was tired, and I honestly started thinking, 'maybe I don't have what it takes to finish at this pace,' and all these other negative thoughts. What happens is you let go of them, you keep moving forward and you realize that it was really a kind of self-imposed limit."

Loutitt says he runs to North Vancouver and Horseshoe Bay and back to Squamish to train, as well as long days on trails where he knows he can find water — and sometimes food in the form of berries. He's also been sponsored by Vega, and never goes anywhere without a pocket full of Vega energy gels to keep his energy up.

He said he sang out loud for about five hours of the race to take his mind off things, and just tried to enjoy being out in nature. "Between singing and just connecting to the environment and nature, I was having as much fun as you can have out there," he said. "It was a blast and a real honour to do it at home — and the new trails were fantastic, I encourage everybody to get out there on those trails."

He also recovered quickly. The race was on Saturday, and on Tuesday he made three laps of the Squamish Chief hiking trails — some training for the hilly course that awaits him in Colorado.

Vernon's Aaron Heidt, who holds records in a lot of local trail running events as well as the Knee Knacker, placed second overall in 7:32:32, while Ed McCarthy was third in 7:47:48. Loutitt and Heidt were racing in Male 30 to 39 while McCarthy was in 20 to 29.

Over 100 racers took part in the roughly 22km off-road half marathon. Victoria's Adam Campbell was first overall in 1:53:51, followed by Mike Murphy of Maple Ridge in 1:54:25. Third overall went to the top female, Anne-Marie Madde of Vancouver, in 2:05:27.