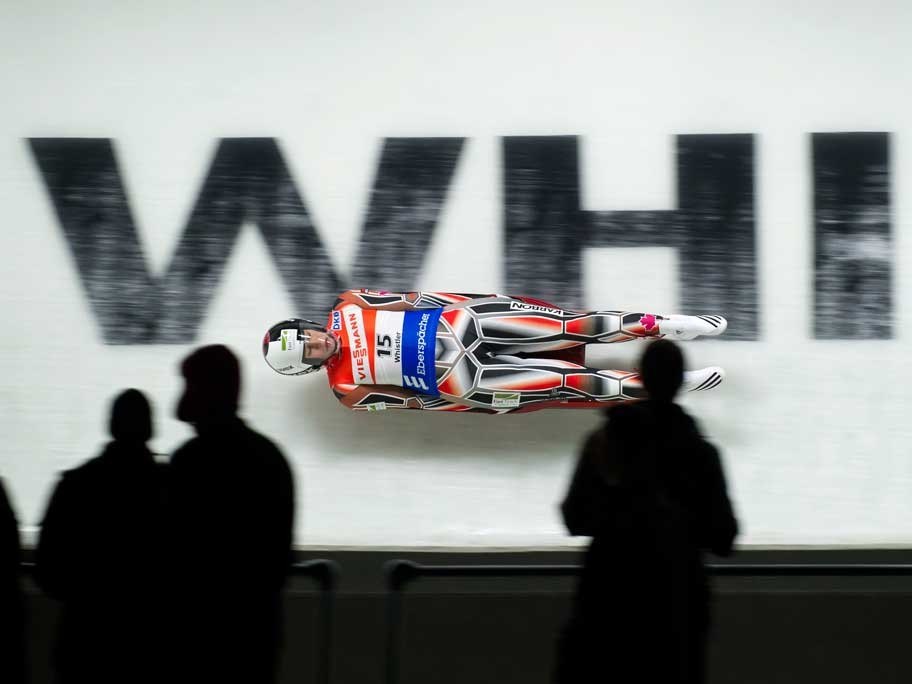 Germany may still be the world's most dominant team in luge, but Canada is catching up.

At the FIL Luge World Cup in Whistler this past weekend, the Canadian team had a solid showing in both the individual events and especially in the team relay, where the athletes combined to win a silver medal.

On Friday, Germany swept five of the top six spots with Olympic champion Felix Loch defending his Olympic title at the course to take the win. His teammate Johannes Ludwig set a new track start record on his first run to take the silver medal, while David Möller took the bronze medal.

Sam Edney had one of the best runs of his career for Canada, tying a career-high placing of fifth with two solids runs on the course. He was fourth after his first run, but dropped one spot after the second run.

Edney's two-run time was 1:37.061, less than three-tenths of a second back of third place.

"I know I can slide with the best of them," he said.

Coach Wolfgang Staudinger pointed out that Canada was the second nation in the world behind Germany in that event, and the field included both the Olympic and world champion.

In men's doubles luge, the rookie team of Tristan Walker and Justin Snith continued to race consistently, placing ninth the first week in Austria and following up with a 10th place finish in Whistler. They were sixth after the first run, but dropped back four spots on their second trip down the track.

"We will learn from this," said Walker. "It is great to be back on this track and racing in front of our friends and family in Canada."

The next day was the much-anticipated women's luge event, where Calgary's Alex Gough was a genuine contender in the battle for the podium with five medals last season and a bronze in the opener in Austria. Unfortunately she made a mistake at the start of her first run, and despite posting the third-fastest second run of the day the best she could finish was fourth.

The key is that first corner out of the start, Gough, said, and if you don't get it perfectly you can't make the time up on the course.

"I was close, even with a mistake," she said. "It was definitely a good race for me and I slid really well so I was happy with that. I worked hard in the summer to get faster at the start."

Natalie Geisenberger and Tatjana Hufner of Germany were first and second, followed by Tatiana Ivanova of Russia. Gough's time was just 0.079 back of Ivanova.

The women's race was followed by the Team Relay event, a new discipline that was approved for the 2014 Games. Each team is comprised of a female, male and doubles team, with the female leaving the start first. When she reaches the finish line she raises her hand to hit a pad suspended over the course that opens the start gate for the male racer. The male racer starts the doubles team and the doubles team starts the clock.

Canada won the first event in Austria, but as they expected the German responded with a big week in Whistler. The Germans took the event in with a combined time of 2:18.773.

But the Canadians proved that their gold medal was no fluke with three consistent runs.

Gough started the team off in second place, Sam Edney posted the fastest times in the two top splits to rank second overall, and the tandem of Walker and Snith was consistent with the fifth-fastest doubles time of the contest. The result was a silver medal for Canada, behind Germany and ahead of Russia.

"What's awesome about this event for us is we all feed of the energy of one another," said Edney.

"We all have a lot of fun doing it. The way we are at the start with each other, the way we warm up together, it brings that team atmosphere to the whole race. We all really benefit from that."

Edney said success at the Team Relay in Austria helped to inspire his own fifth place result in Whistler. "All of us will feed off this success as a team, and it gives us confidence no matter what run we're taking. It really shows the strength of our program and where we're headed."

Coach Wolfgang Staudinger said the Team Relay event has been good for Canada. "We knew the Germans would come back hard, and they did, but we're still happy with second and the fact that we're tied at first in the overall standings," he said.

"This is an Olympic event, and means a lot to the athletes and also for funding. We know we can be in the top three consistently level, and now it's up to us to maintain the level and get the results we can actually achieve."

Despite the fact that athletes are still using the lower starts — a switch made after the death of Georgian luger Nodar Kumaritashvili in a training run before the2010 Games — the course was fast. The top women were close to 135km/h, which was the theoretical top speed for the track from the top start. Some men were over 145km/h.