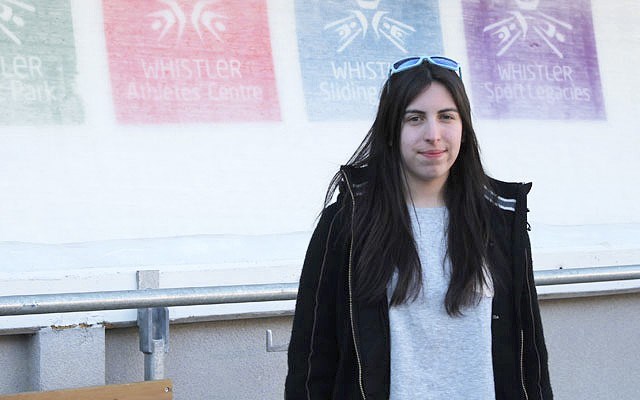 Sliding Ahead: Local luger Veronica Ravenna had a rough start to the year, but won a bronze medal at the Canadian Youth Championships in Calgary on Feb. 23.. Photo by Dan Falloon

The start of Veronica Ravenna's season was delayed, but she quickly got up to speed once she made it.

The 17-year-old luger was injured in early-season training getting ready for Canadian qualifiers, but a surprisingly quick recovery didn't scuttle her whole season.

Though Ravenna missed the opportunity to represent Canada, she and her father, Jorge, quickly made an arrangement with the Argentinian organization to allow her to represent them in the Youth A World Cup. The family arrived in Canada in 2004.

"The Argentinian people were following her, they know her," Jorge said. "We called the Argentinians and they said she can go (represent them). It took 48 hours and then we were on the plane.

"The luge community around the world is really small and all the international federations want more countries involved, so as soon as someone who is not (from) a regular country is competing, they're really open to say 'Yes, come, we need more people. We need more countries.'"

Though Ravenna missed the first half of the Youth A schedule — including two races here in Whistler — with a broken collarbone, Ravenna joined the circuit for the European portion of the schedule. She posted two top-10 finishes in her three outings and finished 15th overall in the standings.

Ravenna was glad to take part in the second half of the season, even if her mindset had to repair alongside her body.

"(The recovery) was actually very quick. I thought it would take much longer," she said. "(Upon returning), I was kind of nervous because I'd been messing up before I broke my collarbone.

"I missed it, definitely."

From there, she returned to Canada and took third at the Canada Cup stop in Calgary on Feb. 22. Squamish's Nicky Klimchuk-Brown also did so on the youth A men's side.

Ravenna was happy with her performance in Alberta.

"It's like our second home track," she said. "I knew the track and I knew all the little secrets and tips. My sled was ready. I was ready."

Like many local lugers, Ravenna got a taste of the sport at the Whistler Sliding Centre. She took to the ice for the first time in advance of the 2010 Winter Olympic Games at the centre and she took to it immediately. Jorge signed her up for the recruitment camp and a speed demon was born.

"It looked really fast when you watch them go, but when you were in it, you felt so in control, it feels so much slower than it was actually going," she said. "It was kind of like a roller coaster."

Though the Whistler leg of the Canadian Youth Championships is set to take place at Whistler Sliding Centre this Friday and Saturday (March 6 and 7), Ravenna won't be in attendance. On March 5, she was invited to train for a week at the track in Lillehammer, Norway and she planned to leave the next day. It's a boon for her, as the 1994 Winter Olympics host is set to hold the Youth Olympics next winter.