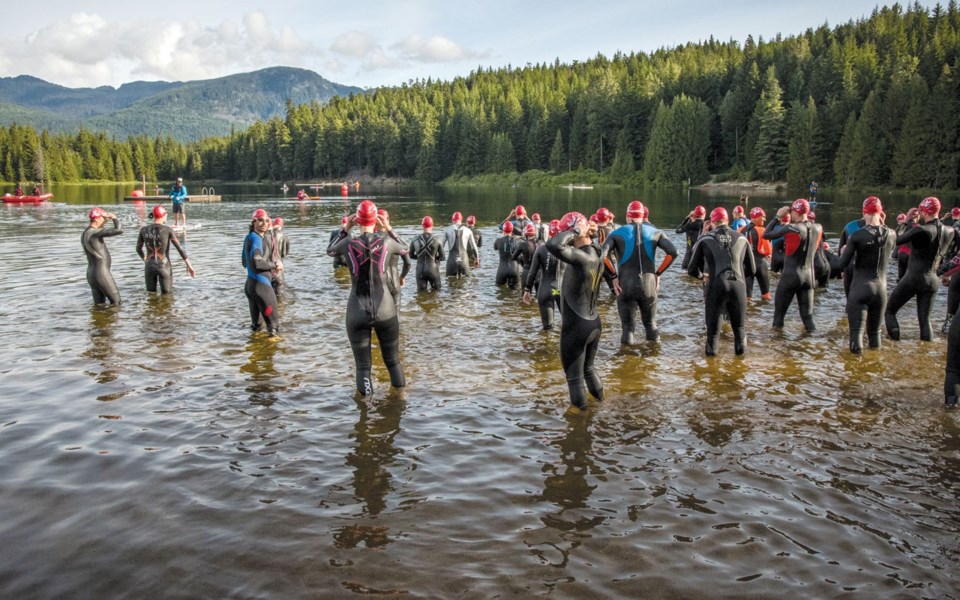 IN THE LAKE Competitors in the Whistler X Triathlon on June 9 prepare for the race to begin. <ParaStyle:CUTLINE\:CUTLINE Credit>Photo by Scott Robarts

The Whistler X Triathlon got a bit of star power for its inaugural event on June 9.

Karsten Madsen, the seventh-place finisher at the Xterra World Championships in 2018 and new Whistler resident, showed up and did as expected, dominating the field in the championship distance as he finished in two hours, 11 minutes and 21 seconds (2:11:21). Madsen was nearly 15 minutes ahead of runner-up Derek Vinge, who himself was eight-and-a-half minutes up on Alexander Walker in third.

The massive gap showed the difference in ability between a top pro, and fit and talented amateurs.

"I'm dedicating myself to this fully and the other people I was racing with on the day, they've got a job, they've got other things going on in their life," Madsen said. "My job is to train and be professional."

In all his travels, Madsen said he's encountered few run courses he's preferred to the one he raced here, while he also enjoyed that the bike course looped to twice provide majestic views of Green Lake.

"I would say the part that they called the grind, the long climb up where you got to look at Green Lake (was a favourite)," he said. "It was such a perfect day weather-wise in terms of the sun, so as you're climbing up, you can look out. The lake was super calm."

Madsen, who competed at Whistler's past Xterra events in 2010 and 2011 and had his 26-inch hardtail ruined by the likes of Danimal as part of his first pro event, was thrilled to see an off-road triathlon returning to the resort. He heard about the new race while training in Arizona during the winter, and was pleased to see it fit into his schedule.

"Having an off-road race in Whistler, it's a must because Whistler is everything about off-road triathlon. It's made for Whistler," he said. "The turnout for Year 1, I thought, was really good. In terms of the way it was marked and run, that's where the Whistler Tri Club did an absolutely fantastic job."

Madsen is set to take a break from racing as he completes a procedure to correct atrial fibrillation issues that caused him to collapse at the ITU World Multisport Championship in Spain earlier this year. He is, however, set for Xterra events in Victoria and Quebec on July.

On the women's side, there was a bit more of a battle. Squamish's Zoe Dawson held off Xterra veteran Katelyn Button by six minutes for the win while Chrisy Drever took third.

Dawson saw that Button experienced some troubles with her bike and made the most of her opponent's misfortune.

"It's a bit unfortunate for her, but I thought she'd catch me," Dawson said.

Dawson's game plan went well, as she found a rhythm in the water, studied the bike course on her first lap and found an efficient line for the second go-around, and made hay on a run course she scouted the day prior.

"It was a lot to do with the pacing. I had a really good swim, just relaxed into that, and the scenery was just beautiful first thing in the morning with the mountains in the background," she said. "It was perfect conditions, not too cold, not too warm. Not too many people, just enough to make it interesting."

In the shorter sport event, Jon Allan and Keren Wareham took the wins while Team Fun Hog edged out Got Chick'd in the relay.

Race director Dale Tiessen, running a triathlon for the first time, was glad with how things went.

"The comments we got back from the athletes was everyone was quite happy with the event," he said. "The course was good and Mother Nature cooperated. We had a really good day for racing."

The event attracted 185 racers, which impressed Tiessen. He said he and his fellow organizers had initially talked about a cap of 250 but realistically expected between 125 and 200. To land in that range allowed for a good athlete experience without having added pressures of high turnout.

"What was surprising and (what) I really liked was that there were a huge amount of people who did the shorter sport race and it was their first or almost first triathlon that they've ever done," he said, noting roughly 70 per cent of the participants boasted Whistler addresses.

Tiessen added that roughly 70 volunteers came out to help.