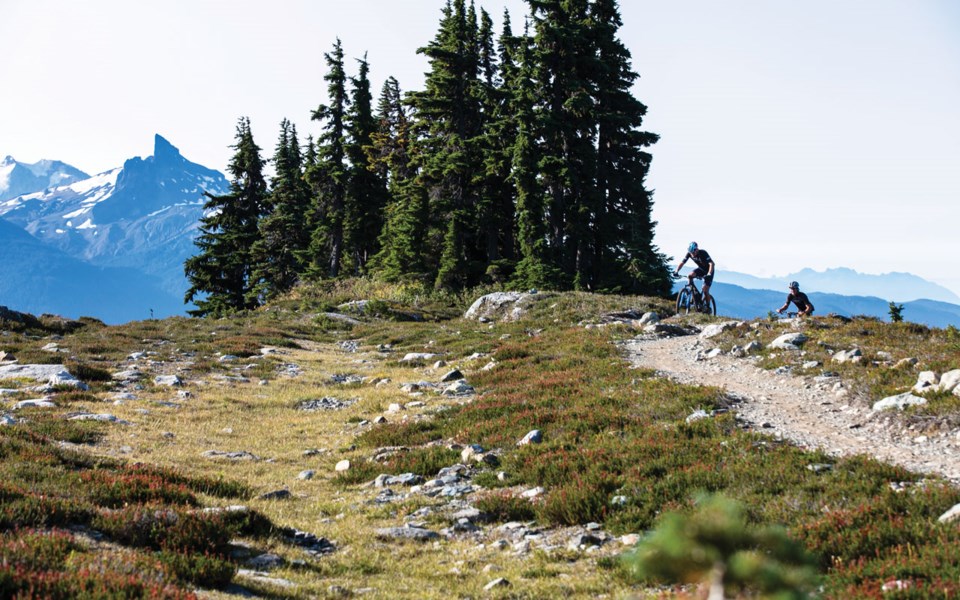 Whistler Xterra triathlete Karsten Madsen completed six laps of the Into the Mystic and Lord of the Squirrels loop on Saturday, Sept. 5.

That made up more than 7,000 metres of climbing and 160 kilometres of riding in 31-degree temperatures, but it was still a bit short of his planned ascent of 8,848 metres, the equivalent height of Mount Everest.

“There was a high potential that completion might not be possible. There were so many different factors that would come into it,” Madsen said. “I’m not an excuse-based person. I wanted to complete it but I couldn’t complete it. There’s a lot of factors that go into it, but they’re just factors, not excuses.

“There was nothing that I would change in terms of the preparation that I did or my execution on the day.”

Madsen stressed that when he stopped his ride, it would have been unsafe to continue. In addition to risking injury, putting himself into a position that would require assistance would have wiped out the good accomplished.

“I felt that if I needed emergency services, then that took away from the whole point of the cause, using community resources to get yourself out of there.”

Early on, Madsen took damage after he came off a bridge oddly and smacked his shoulder into a tree on the second descent.

“To be honest, though, you’re so numb to everything,” he said. “I didn’t feel it at all during the ride.”

One of the major differences between the trail attempt and his previous successful Everest attempt on Kadenwood’s roads in May, Madsen noted, is while he could control his heart rate on the streets, some of the steep trail climbs made that impossible.

“On the Lord of the Squirrels climb, it’s just really steep and the minimum to get up it is an effort,” he said. “It all adds up to this accumulative fatigue.

“After Lap 4, I knew I was in trouble and I’m pretty happy I banged out two more laps after that one.”

Madsen had riding partners, including another local triathlete in Adam Ward, as well as five-time Olympian Katerina Nash, pushing him throughout the day.

“She dragged an extra lap out of me, 100 per cent,” he said of Nash. “Between Lap 5 and Lap 6, I didn’t want to drink or eat anymore. Your body’s just starting to shut down, and she was forcing me to stay on it.”

Madsen was grateful for help from many volunteers, including his dad, who would clean up the bike between laps.

On the fundraising side, Madsen surpassed his goal of raising $8,848 (one for every metre he looked to climb) for the Whistler Off-Road Cycling Association (WORCA), making $13,470 for the organization as of Sept. 16.

“The community of Whistler smashed that. That’s not me. That’s the community buying in to this cause,” he said. “In a year where the ridership is up but the funds are down, we need to fill in these holes.”

WORCA executive director Trevor Ferrao said the cash comes in handy, especially after the organization’s fee-for-service agreement with the Resort Municipality of Whistler (RMOW) was reduced to $40,000 from $120,000 this year.

“It was more than we thought, which is great,” he said of Madsen’s fundraising. “Our trail crew, we were really just planning to have them on for September … Now we’re able to extend into October as well.”

Among the trails crews will work on is Lord of the Squirrels, completing maintenance in the upper section.

As WORCA heads into the fall, Ferrao said priorities for the organization include updating its strategic plan, determining if there is funding to hire a trails and planning administrator, and working out a new fee-for-service agreement with RMOW, as the current deal expires at the end of 2020.

At this point, Madsen doesn’t anticipate another shot at the 8,848-metre mark in the future. Firstly, he expects to return to his race schedule and training methods and, secondly, speaking on Sept. 10, said he was still tuckered five days later. Madsen said he went to visit his sister in Pemberton and was so exhausted he slumped down for a 90-minute nap on her kitchen floor.

“I was completely shattered when I was finished,” he said. “Right now, my right hand is pretty messed up from just holding the bars and I have energy-level problems.”

Madsen added that a documentary about his summer and the alpine attempt is in production, and there will be a screening at a time in 2021, also in support of WORCA.