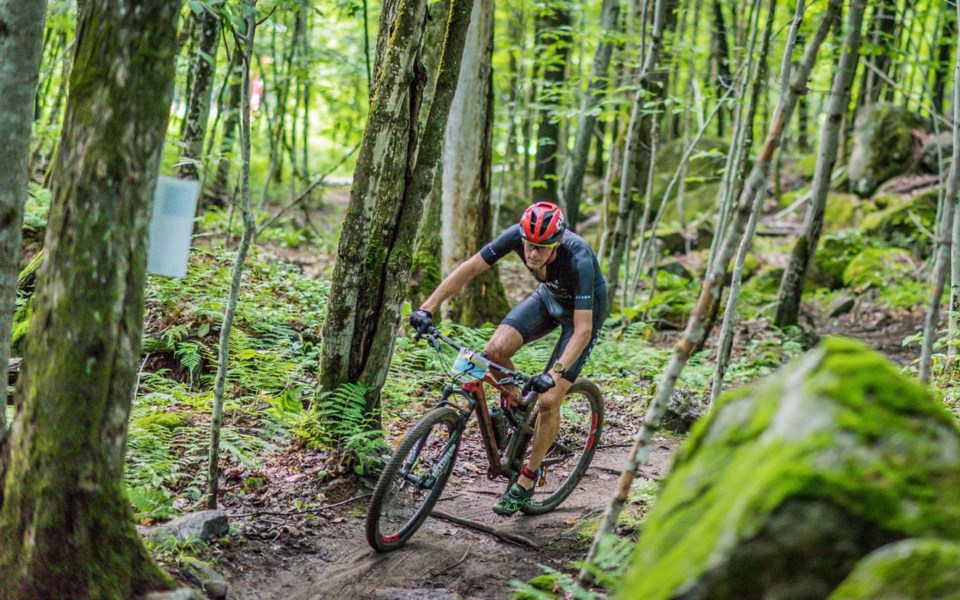 For the second consecutive week, Whistler triathlete Karsten Madsen found himself on the Xterra podium.

After placing third in Victoria on July 7, Madsen climbed a spot into second at Festival Xterra Quebec on July 14.

Madsen started strong, exiting the water alongside Edmond Roy, with nearly a four-minute gap on eventual winner Josiah Middaugh. However, Middaugh made up that time on the bike section and didn't look back, eventually crossing the line in two hours, 46 minutes and 18 seconds (2:46:18), 2:21 ahead of Madsen.

Madsen is still recovering from a recent heart procedure to detect arrhythmias. (See

"I wanted to put as much time on Josiah in the non-wetsuit swim as possible. On the bike I knew I would lose some time to him, but I felt I was riding the downs really good. On the third lap, I made a mental mistake and crashed hard over the bars, and my face took most of the impact," Madsen told www.xterraplanet.com. "I collected myself and got going again when Josiah came by me like a freight train. We came into [the second transition] together, but I was running hurt. Racing full out to try and win is risky and today I found myself on the ground but I'm happy I took my shot at it.

"Honestly, every race and training session my heart does what it should, is building confidence again in my mind."

Pemberton's Big Sky Golf Club welcomed plenty of the province's top golfers for the 117th BC Amateur Championship from July 9 to 12.

Rothwell birdied 22 of the 72 holes while also adding an eagle over the course of the tournament.

Big Sky's own Lance Lundy tied for 15th, 13 strokes back while Nick Soldan Harriss was tied for 52nd, 27 shots off the pace. A third Big Sky member, Stephen Protz, also made the cut, finishing 72nd, 34 strokes back.

Cruz fifth at Les Gets

Canada had a banner day in the Mercedes-Benz UCI Mountain Bike World Cup race in Les Gets, France on July 12, as Pemberton's Lucas Cruz finished fifth overall—and third among his countrymen—in the junior men's contest.

Cruz completed the course in a time of three minutes, 8.25 seconds (3:08.25), 3.64 seconds behind winner Thibault Daprela of France. Patrick Laffey nicked fellow Canuck Seth Sherlock of Squamish for second as both hit the podium. "Race run had a few hiccups but I had my eyes set on the top box and I will continue that for the rest of the season," Cruz posted to his Instagram page after the race.