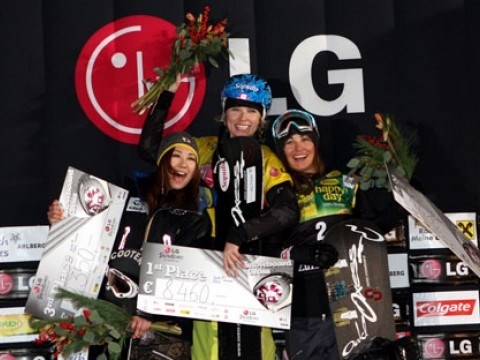 Sea to Sky rider Maëlle Ricker officially joined the B.C. Sports Hall of Fame last week, a nomination that took the Olympic champion by surprise given that she's still active with no plans to retire.

"I thought, 'wait a minute, I'm not done,'" she laughed. "I didn't know the rules of how you got inducted, but then I saw (Team Canada Goalie Roberto) Luongo saying the same thing so I didn't feel bad being confused. It was a really nice evening and I was pretty honoured to be standing with the people I was being inducted with. It was also a big deal for friends and family who have supported me for so many years - it was the first time since the Games that I've had that (many) family and friends together in one spot."

The story for Ricker since last January has been rehabilitation. She was attempting a pass at the World Championships when she went off course slightly, hooked her hand in the gate and crashed. She went through her eighth knee injury, but the hard part has been rehabilitating her shoulder. It's been going well - she recently joined the national team for a training camp at Mt. Hood and plans to leave with the team at the end of the month for a two-week camp in Austria.

"Rehab is good, although it's the ultimate test of my patience," she said. "The shoulder with the nerve injury is always there, and it's starting to fire again, and the deltoid again, so I'll keep at it and in another six to nine months I should be stronger - which is great news because for a while I was looking like a bit of a chicken wing."

Her knee is also recovering well, but with so many surgeries it's a challenge she's used to.

While Ricker was surprised by her induction, the officials at the hall of fame also got a surprise of their own when they discovered the fact that Ricker had been there before. In 1996 Ricker received the Jack Farley Youth Sports Achievement Award as the top high school athlete in the province. At the time she was already an international-calibre snowboarder, as well as a star track athlete, a member of her school and community rep soccer teams captain of her school's basketball team and a goalkeeper for her school's field hockey team.

Ricker said she gets the question about retirement a lot more since she won her gold medal, but it's not something she's really thinking about.

"I'm still having such a good time, and I don't feel I've even really reached my peak yet. I feel I could still ride so much better. And I still love the travelling, so it's kind of hard to throw in the towel," she said.

This year her goal is to recover and build up a base for the next two years - the World Championships in Canada in 2013 and the Olympic Winter Games in 2014. She's not looking past that.

She's also going to try out some new equipment and techniques, which are continually evolving.

"There's a constant evolution in board designs right now, and I'm actually trying out a whole new board technology in October - they're trying to make a board (at Burton) that's suited for me," she said. "There's lots of different changes going on and our coach Marcel from France has really been pushing the technology on boardercross boards. It's actually pretty fun and there's always something new to think about and try out.

"This is a good year to be doing all that, and just getting my confidence back up and getting back in race shape because it will be almost a year from when I hurt myself in January before I'll be racing again."

There's no question whether Ricker's achievements warrant an early entry into the Hall of Fame. In addition to winning the gold medal in snowboardcross in 2010, she has also won three crystal globes in snowboarding, and placed third in the World Cup standings from 2006 to 2010. Since 1997 she has won 35 World Cup medals, and two X Games gold medals - and likely would have won more if it wasn't for a string of knee injuries that kept her on the sidelines for much of her career. Her best World Cup season was in 2010 when she won the Olympics, snowboardcross title, overall snowboard title (aided by a rare appearance in halfpipe to make up some points) and six World Cup medals. She also won the Mount Baker Legendary Banked Slalom, and has won that race five years in a row.