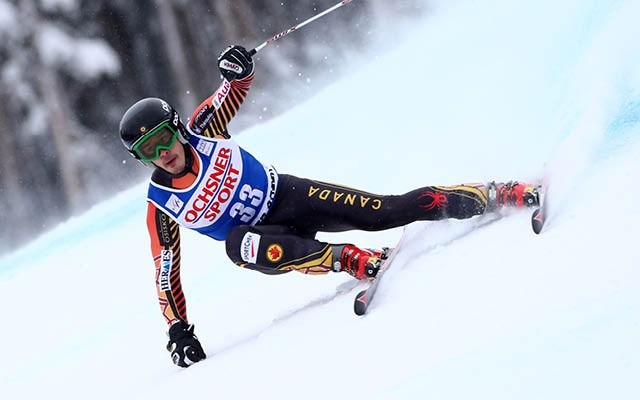 "Another fourth! It's just a matter of time before I get a podium," said Osborne-Paradis, who also placed fourth at Kvitfjell, Norway, in the last downhill of the 2012-13 season.

"I finished off last year with a fourth and today I got a fourth on a course I normally don't do well on," added the Whistler Mountain Ski Club product. "I kind of knew I was getting the wooden spoon but Jan and I and Erik (Guay) are all skiing well."

Starting fifth, Osborne-Paradis set the early pace by skiing into first place, but the lead didn't last long, as Italy's Peter Fill was the next skier down and grabbed the lead for himself. However, Osborne-Paradis would hang on to a podium spot until reigning downhill world champ Aksel Lund Svindal crossed the line with the winning time, pushing Austria's Hannes Reichelt to second and Fill to third.

"I'm skiing better and I'm skiing faster and more confidently," said the 29-year-old. "My run was pretty clean. I made a mistake on the pitch and came out a little low and that probably cost me the race, but that's racing."

Guay finished 16th on Friday, while Jeffrey Frisch placed 40th for Canada and teammate Ben Thomsen was 46th. Whistler's Conrad Pridy crashed into the netting but was reportedly OK after the spill, while Dustin Cook also did not finish.

Saturday's super-G wasn't as memorable for most of the Canadian crew — Hudec's 13th-place finish was the only result in the top 20 — but Whistler's Morgan Pridy finished 24th to earn World Cup points for the first time, making just his second start in the discipline.

"It's a huge relief to have that first score over with. It's like getting a monkey off my back," said the younger of the Pridy brothers, who won last year's Nor-Am Cup super-G title. "It's not like I didn't think I'd do it, but until you actually do it, there's no way to know for sure."

Pridy said he was pleased with the way he closed his run, skiing a strong bottom section of the course to move up from his No. 33 start position.

"I thought it was a nice run and that it was really close to how I skied in training," he said.

Switzerland's Patrick Kueng took the win, while Austria's Otmar Striedinger took second and Reichelt was third. Osborne-Paradis, in 27th, and Guay, 30th, were the only other Canadians in the points.

Meanwhile, Whistler's Robbie Dixon made his first World Cup start since the 2011-12 season on Saturday and finished 41st after starting 57th.

Canada's Trevor Philp also picked up his first-career World Cup points with a 30th-place finish in Sunday's giant slalom, which ended with a one-two American finish from Ted Ligety and Bode Miller.