Whistler Mountain Ski Club alum predicts he'll be back on the snow sometime this winter
Nov 5, 2019 11:04 AM By: Lori Ewing, The Canadian Press 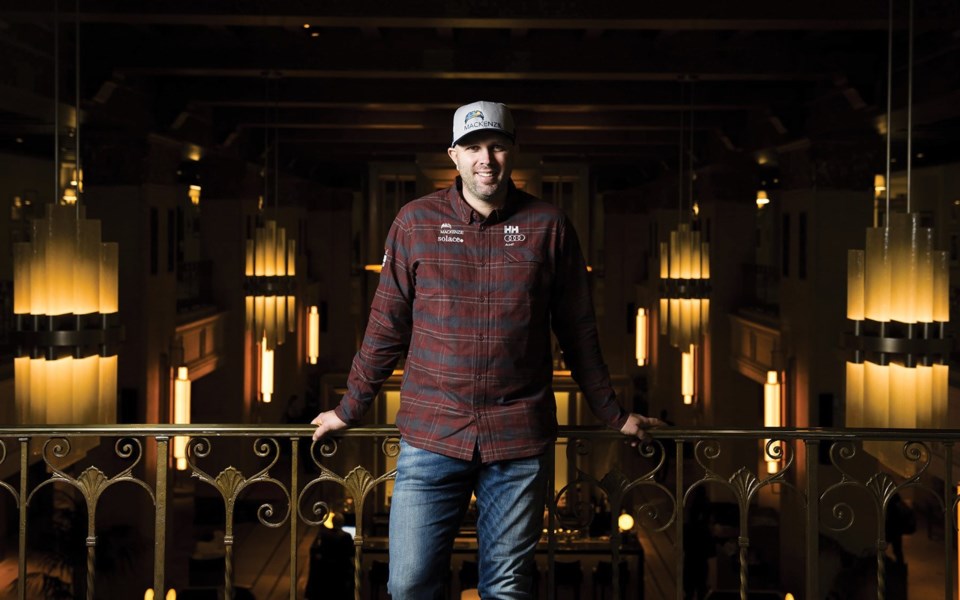 TORONTO — Between the titanium plates and the 13 screws assembled in a mish-mash array of angles, his X-ray looks like a pile of Pick-Up Sticks.

It's almost a year ago to the day that Manuel Osborne-Paradis crashed at Lake Louise, Alta., in his first training run for his opening race of the World Cup ski season.

Emotions were already frayed that week in the sport's tight-knit community. Canadian teammate Broderick Thompson had suffered a season-ending knee injury days earlier at nearby Nakiska. It was the one-year anniversary of the death of French skier David Poisson on the same Alberta hill.

"So it was kind of a tough time. . . the thoughts were there," Osborne-Paradis said.

Physically, the 35-year-old from North Vancouver, B.C., was feeling great. His equipment was responding well. But halfway down his run, Osborne-Paradis made a "silly mistake, a lackadaisical turn where I wasn't over the outside ski like I should have been."

He hit some soft snow, and went sailing head over heels into the safety nets, shattering his tibia and fibula so thoroughly there was concern he might lose his leg. Certainly few people ever thought he'd ski again.

"I hadn't even stopped falling and I was thinking 'Uh-oh, this is broken,'" Osborne-Paradis said.

Osborne-Paradis hadn't talked publicly much about that horrible day. His future had been so uncertain. But he is mounting a return, hoping to cap his career at the 2022 Beijing Olympics in what would be a remarkable comeback story.

Recounting that day, the skier said medical personnel was quick to reach the mangled 11-time World Cup medallist. One of them popped a Fentanyl lobby-pop in his mouth for the pain. They rolled him on his side — his leg too crushed to transport him on his back — and airlifted him off the mountain to a Calgary hospital.

Canadian veteran Erik Guay was at the top of the hill readying for his run, and heard his teammate's screams over the coaches' radios. Guay announced his retirement later that week.

"We were all under a lot of pressure at that time, and it would be tough when you have teammates falling every week and hurting themselves," Osborne-Paradis said. "As real as it is in our sport that injuries are bound to happen, and it's more of a when not if, when they start happening every week it's too close to reality."

Sitting in a posh hotel Tuesday in downtown Toronto were Alpine Canada was celebrating its 100th anniversary the next day, Osborne-Paradis scrolled through his phone. There were photos from his hospital bed with wife Lana. There were photos of the deep gash in his leg, that had to be reopened several times to relieve compartment syndrome. And there's the X-ray of his shattered tibia and fibula. (Google "gruesome broken leg X-rays" and the Canadian skier's would be among the worst).

His tibial fracture as a 5 out of 6 on the Schatzker Scale of severity. A 6 usually occurs in a fatality, Osborne-Paradis said — such as when the engine block of a car is driven up through the leg.

He had two major surgeries and seven minor ones over 12 days. His bones are patched together by plates, 13 screws and bone cement. Doctors couldn't save the tibia, replacing it with a cadaver's hip bone.

His case has become well-known among Calgary's medical community.

"I was walking around the golf course the other day and this woman was walking her dog, and said 'Are you Manny? I'm a doctor in Calgary, I've heard about your leg, and oh my god it was nasty,'" he said.

It wasn't a stretch that Osborne-Paradis was told he'd never ski again.

"Yeah with that attitude you're never going to ski again," he said. "But the only reason I've stood on the podium or won races is because you're defying odds. If you just looked at the odds, nobody would ever join sports, and so I feel like this is just another bump in the road.

"My team and my sponsors and myself, we all had a goal of making it to the next Olympics, and at this point, there's just no counting that out. There's a process in place to get back. It's possible. I was skiing at a high level, and if I can get back to 95 per cent or 100 per cent, there's no doubt in my mind and my teams mind that I can stand on the podium again."

There have certainly been setbacks in his recovery. He pushed it too hard in the gym during his rehabilitation, breaking all but four of the screws. Doctors opted against another surgery, so there those screws remain. It knocked him back in his recovery more than two months.

He still hasn't been cleared to ski, but predicts he'll be back on the snow sometime this winter. He plans to race again next season.

He knows there'll be fear when he's crouched in the start hut for that first run when he returns. But fear is a big part of any ski racer's career.

"You're always prepared to be injured with skiing," Osborne-Paradis said. "You learn to conquer those demons and every race there's something that scares you. That's what the training is for . . . it's normalizing the extremes that we do."

Along with his rehab, the world championship bronze medallist is completing a sport management program at Harvard.

His daughter Sloane turns three later this month, and Lana, a personal trainer and has a women's health online group — www.blastfitness.ca — is pregnant with their second child.

If he comeback is derailed, Osborne-Paradis said he'll leave the sport fulfilled, all of his childhood dreams reached.

"I'm not out there to prove that I need to be better, I think that I've achieved this high level of skiing and this amazing career that I've been humbled to experience that's just though sheer hard work determination and mental tenacity, and this is just another battle to deal with."

This report by The Canadian Press was first published Nov. 5, 2019.