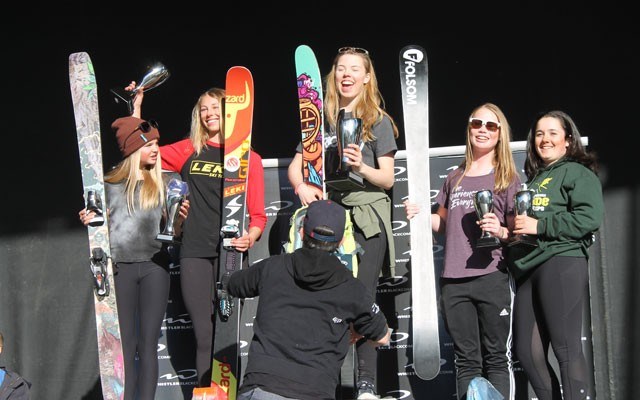 Olivia McNeill took the top step twice in front of a roaring crowd in Skier's Plaza on Saturday, April 9.

For starters, McNeill took the International Freeskiers and Snowboarders Association (IFSA) North American Championships title in her division for the second consecutive year.

But, in what she described as a shock, the Whistler Freeride Club member also took the overall 12-14 women's ski title, jumping from fourth, though she thought she was even further down.

"I was very surprised about the overall because I thought I was in, like, 11th place," she chuckled.

Though McNeill is usually one to push the limits and really send it, she tugged the reins just a bit during finals after analyzing the conditions and realizing her planned run was unnecessarily risky. She ultimately took a two-run score of 69.53 to get past two Squaw Valley skiers, Ava Seelenfreund (66.00) and Elena Silverman (63.10) without much difficulty.

"It was quite icy and going really fast, so I decided I'd take it a bit easier and not hit as many things as I'd planned on hitting because that would send me quite fast," she said. "I didn't want to leave an option for messing up so I kept it more safe and made sure I would not fall. I kept on my feet."

McNeill was also thrilled to enjoy a bit of a change in her schedule as she was sent down the hill first in the Thursday qualifiers, finally allowing her to catch her friends' and teammates' attempts.

"(I was) watching everyone else as well for inspiration," she said. "It was really cool to see all the different people and also meet a bunch of different people who I hadn't met before. Also, I got to go first in qualifiers, so I got to see everyone in my category, which was really cool. This year, I've been running last a lot, so I haven't seen everyone ski, so it's nice to actually watch their runs and see how they do.

"As a friend, you want to see their runs so you can congratulate them, not just because you heard what they did, but because you saw it."

A veteran of the IFSA junior circuit even at the age of 14, McNeill was excited to take part in the event, which was affiliated with the World Ski and Snowboard Festival and all the extra festivities that go along with the late-season party.

"There's definitely not usually a stage," she said. "It's a lot sunnier. It was quite cold outside last year. It's nice to be in the sun so once we get down our runs, we can relax and sit in the sun in T-shirts. That's pretty cool.

"There are tons of people so that's awesome. It's nice to have an audience."

McNeill said the extra attention didn't really affect her, as she would have had some butterflies regardless.

Fellow 12-14 competitor Amanda Constantini was also invited up on stage as the fifth-place finisher, posting a 61.37 tally. The first-year contestant was pleased to perform so well on such a wide platform.

"I just had to make myself have a good run," she said. "It wasn't just like a simple little competition to try to get into finals because it was the North American Championships so they cut more than 65 per cent of the people. You really had to stay on your feet."

Constantini said her familiarity with the mountain made a major difference for her, as it allowed her to successfully make changes on the fly if necessary, something she doesn't think would have gone so well elsewhere.

"It was a big advantage because we got to ski in the venue, in the Diamond Bowl, a lot more than the other athletes did," she said. "We got to know the runs, so if we missed the drop on one of our features, then we could just find another one that we would know."

As for the male 12-14 ski category, Lake Louise's Cole Richardson scored the win by edging Red Mountain's Simon Hillis by 0.4 points while Alpine Big Mountain's Turner Drummond was third. Jakob Jewett was the top WFC finisher in 13th, while Rhys Higgins was 16th, Connor Darnbrough was 20th and Lachlan McNeill was 24th.

The snowboarders were a smaller contingent than the skiers, but they still shredded their runs.

Hayley Houston of Stevens Pass took the female 12-14 crown over Mia Farley of Winter Park. As for the males, Squaw Valley's Nathan Bromley notched the win over Dagan Schwartz and George Skaff.