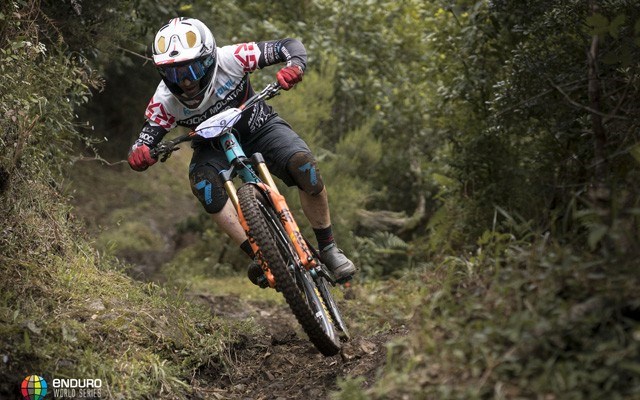 Things were all coming up Jesse Melamed's way on Day 1 of the Enduro World Series at Madeira, Portugal last weekend.

The Whistler rider finished no lower than seventh in any of the first day's five stages, and that consistency led to a cushion over the field at the midpoint.

He started strong on the second day, with a fifth-place result in Stage 6, but mechanical issues dropped him back, with bottom-ranked times in the next two stages ultimately turning into a did-not-finish gut punch.

"(Stuff) happens! It's not the first time a mechanical has forced the win out of my hands and it probably won't be the last. But damn I thought I had this one! It's a hard one to swallow... Thankfully I have a chance at redemption in two short weeks," Melamed posted to Instagram after the race.

On the flip side, Whistler resident Yoann Barelli posted a ninth-place finish, crossing the line about 62 seconds back of winner Greg Callaghan of Ireland. Belgium's Martin Maes and France's Damien Oton rounded out the top three.

"I'm so damn pumped guys! It's been a race where anything could happen, and it happened a lot to a lot of people... despite a broken pedal from Stage 5 till the end, and a flat tire on Stage 8, I managed to not lose lots of time, to keep it together the all way and I made it into the top 10 overall," Barelli said on his Instagram page.

On the women's side, Squamish's Miranda Miller took fifth while Whistler's Christina Chappetta trudged to 20th.

Miller won Stage 7 to get back into Top 5 contention and hung on over fellow Canadian Casey Brown, who was sixth. France's Cecile Ravanel took the win over fellow France rider Isabeau Coudurier and Israel's Noga Korem.

"Nine stages in Madeira meant that a lot was able to happen before the finish. I managed my first-ever stage win, which was cool. I mouth breathed and duck pedaled my way into fifth overall for the weekend," Miller posted to Instagram.

The next race is slated for May 28 in County Wicklow, Ireland.

With the second UCI World Cup downhill event on tap in Fort William in two weeks, Whistler phenom Finn Iles cruised to a win in the British National Downhill Series event there on the weekend.

Iles completed the course in a time of four minutes, 40.40 seconds (4:40.40) to best runner-up Joe Breeden in the junior men's division by just over seven seconds. Kaos Seagrave took third.

"Good racing up in the Fort, happy to take the win. Really looking forward to the world cup in a couple weeks," he posted to Instagram after the win.

Iles was the UCI World Cup junior men's champion in 2016 and is looking to defend his title this season.

Trio of Whistlerites medal at triathlon

At the Westwood Lake Triathlon, in the standard distance, Emil Bakke took the win in the men's 16 to 19 division while finishing 19th overall. Corinne Cowden, meanwhile was third in the women's 50 to 54 event.

In the sprint distance, John Hall finished third overall in the men's 50 to 54 event.

Storm to play for Tier 3 title

The Whistler Secondary School (WSS) Storm boys' hockey team is set to play for a championship.

The Storm emerged from the Tier 3 Western division with a 5-2 win over the Magee Lions on May 12.

Xavier Cadoret figured in all the goals, tallying a hat trick while adding two assists while Cody Flann scored the other two goals. Drew Palm, meanwhile, shone in net to allow WSS to pull away with the win.

Eric Smith and Adam Corless each posted assists in the victory to help the Storm's case as well.

The Storm will face Robert Bateman Secondary School on Thursday, May 18 at Planet Ice Coquitlam at 11:45 a.m.

The WSS Storm girls' soccer team is through to provincials.

The Storm locked down defensively, not allowing a goal against in the zone tournament on May 15 to advance to provincials from June 1 to 3.

The Storm blanked both King David and Pemberton by 3-0 scores while in their third game, the squad eked out a 1-0 win over West Point Grey in a shootout.

In other WSS news, the track and field team qualified for the zone tournament.