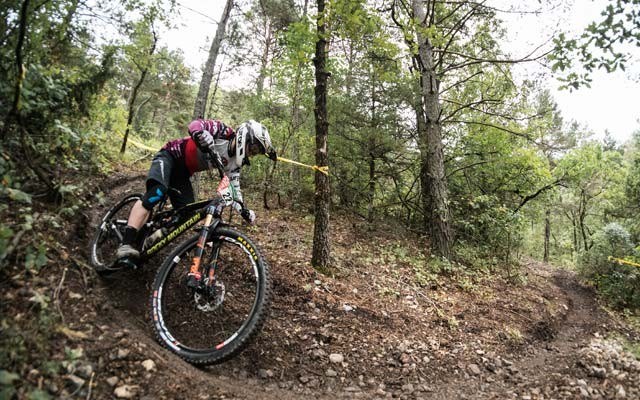 Jesse Melamed was hoping his post-season cold would at least hold off until, you know, after the season.

It unfortunately didn't play out that way for the 24-year-old, who was afflicted during the final race of the Enduro World Series (EWS) campaign at Finale Ligure, Italy last weekend.

"Unfortunately, I got sick before the race," he said. "I could feel it coming Friday night thinking 'This isn't good because these days are hard enough as it is.' It was just a head cold, stuffed up and a little bit of headache and coughing. It wasn't too bad, but I just knew in terms of energy, they're hard enough as they are.

"My only focus was the fluid intake, just focus on that. It went by pretty smooth. I knew I was tired because a couple of the stages started really gnarly thinking 'Oh, this could be really bad.' In the stages, it didn't really seem to matter because I was still right up there."

Though Melamed did well, winning the fifth stage en route to a seventh-place finish when the two-day race was complete, he still couldn't help but wonder what might have been as he struggled in the first section of each day, setting him back.

"I didn't know how I was going to feel so that threw my preparation off. The first stage each day was just terrible," he said. "Stage 1 and 4, I didn't feel like I did any mistakes, but they were just my worst stages of the weekend. That's where it affected me most, I think, just getting into the day."

In total, Melamed placed 62 seconds back of winner Martin Maes, who won each of the first four stages to set up a healthy cushion. The Whistlerite broke the chain with his victory in the fifth.

"It's huge. I've won a stage in the last three races — all different races, all different terrain, all different locations. I think that really proves that I have the speed," he said. "It gives you a lot of confidence. The best is that I don't feel like I'm doing anything special.

"Stage 5 there was after a pretty bad stage and I just went out and rode my bike and didn't go crazy and I won it."

Melamed explained there was plenty of variety in that fifth stanza as there were gnarly elements that suited him before some tight sections, a steep climb before finishing with some loose corners.

The top-10 finish is also a matter of redemption, as Finale Ligure has historically been a tough stop for Melamed with his previous best result there being a 37th in 2014.

"Three years ago, I separated my shoulder. Two years ago, I just had a bad result... and last year, I flatted," he said. "I've never had good luck here and I was wondering if it's because the stages don't suit me. I didn't know what to think, so this proves that there's no trick to it.

"Next year, I can go into it and have no fear... It's the last race every season and a lot comes down to that race. To know that I can perform there is huge."

With more time to ride this offseason, as he graduated from the University of British Columbia with a computer science degree last spring, Melamed hopes to put himself into position to even climb a little higher next year.

He also hopes to start next year with a bang, pre-riding the Rotorua course and getting his legs back after struggling in the first quarter of this season.

"My goal will be to start fast," he said. "If I start the season fast, who knows how it'll go?

"You look at this season and it's a huge 'what-if' if I didn't hurt myself at the first race. (I had) two poor results in Chile and Argentina and with some marginal results there, I could be top-five."