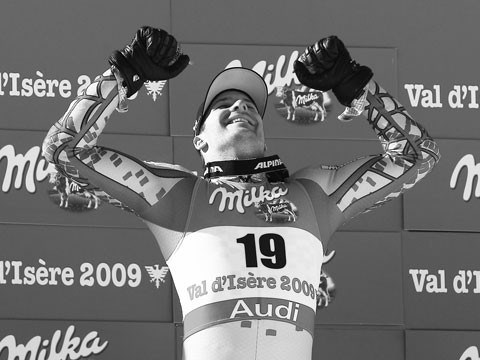 Whistler's Mike Janyk has been knocking on the podium door all season long, but once again came just short of getting in.

At Bansko, Bulgaria, Janyk placed fifth overall, missing the podium by just over half a second. He was sitting in fourth after the first run but made a few small mistakes on the lower part of the run to drop back.

It was Janyk's third top five finish this season. He was also on pace to podium at the FIS Alpine World Championships, but hooked a ski on his second run to go off course.

"I'm really, really happy with my skiing and my approach to the day," said Janyk. "The result is good and bad. It's awesome to be top five and so frustrating to be just off the podium.

"It's so clear in my mind what I need to do. I know I can be on the top of the podium."

Austria's Mario Matt took the win, followed by teammate Reinfried Herbst and Jean-Baptiste Grange of France. Ivica Kostelic, the World Cup leader this season, did not finish his race.

Patrick Biggs was the only other Canadian to finish two runs, placing 22nd overall.

Julien Cousineau, who placed fifth in the world championships, was 12th after the first run and was laying down the fastest second run of the day when he straddled a gate.

"This hill is not one that we favour," said coach Dusan Grasic. "It's fairly flat. We usually do better on the steeper courses.

"If these guys keep skiing the way they are and have a little bit of luck it will happen. The only thing we need now is patience - keep pushing."

There was also a super combined race, but no Canadians finished both runs. The winner was Christof Innerhofer of Italy, followed by Felix Neureuther of Germany and Thomas Mermillod Blondin of France.

The women's team was at Are, Sweden.

In the super combined, Marie-Michele Gagnon was 19th for Canada. Maria Riesch of Germany took the win, followed by Tina Maze of Slovenia and Elisabeth Goergl of Austria.

In the downhill, Whistler's Britt Janyk placed 22nd. Lindsey Vonn picked up the win - her seventh of the season, and 12th medal - followed by Maze and Riesch.

In the super G, Janyk was 25th. Maria Riesch took the win, followed by Americans Vonn and Julia Mancuso.

While there's no question that the Olympics get far more attention than the Paralympics, British Columbians sat up and took notice when Lauren Woolstencroft completely swept the women's alpine standing category with five gold medals in Whistler. As a result, B.C. residents voted Woolstencroft the best athlete in the province at Sport B.C.'s "Best of B.C. Award" last week.

In addition to her five gold medals in 2010, Woolstencroft had five medals from previous Paralympic Games to become the most decorate female athlete in Paralympic history.

"I'm honoured to have received this award, especially since it is based on fans voting," she said. "I was up against a tough and incredible group of athletes which makes it even more exciting.

"It's crazy how people get touched by major sporting events such as the Olympic and Paralympic Games."

Woolstencroft stepped back from racing this year to focus on her career as an electrical engineer with B.C. Hydro.

Woolstencroft was born missing both legs below the knees and her left arm below the elbow, but learned to ski standing as a child at Mt. Washington. Even with the time factor applied to her disability, Woolstencroft won every Paralympic race by a convincing margin.