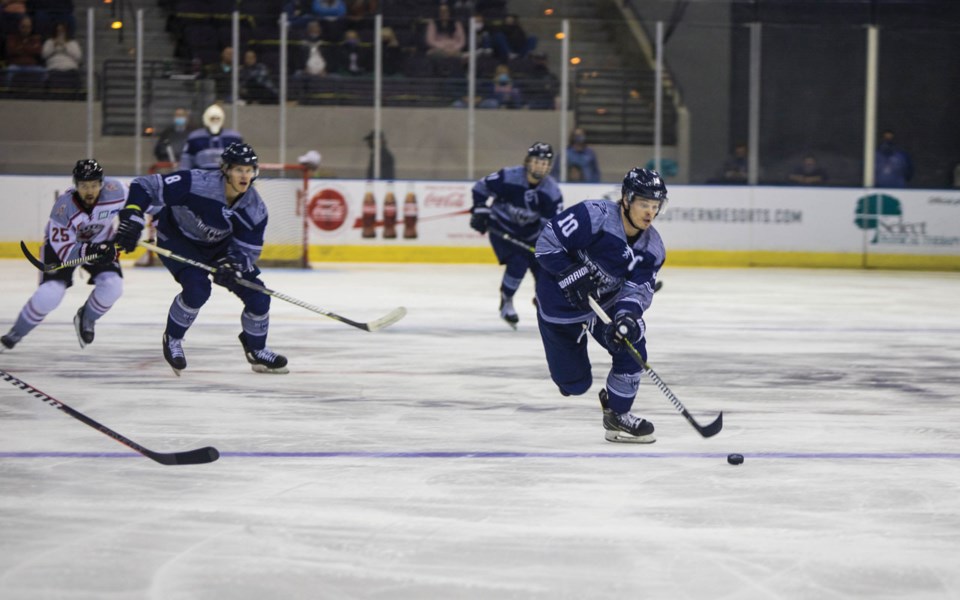 It may sound a bit bizarre, especially to British Columbians, but Whistler’s Garrett Milan is playing hockey in front of thousands of spectators these days.

Milan, who turns 30 this spring, is leading the Southern Professional Hockey League’s Pensacola Ice Flyers through a strange season as their newly minted captain.

“It’s a tremendous honour, for sure. When you get named captain of any team, it’s a big honour, but especially a team with a winning tradition and a good organization like Pensacola,” he said.

While in some ways it’s difficult to provide leadership in a pandemic, Milan noted that all the players are experiencing the changes for the first time together and the expectations of their conduct, to not take risks and jeopardize their health or anyone else’s, have been firmly set.

Milan noted that when the SPHL announced it would have a season this year, he was keen to suit up.

“I was all in. When you’re a little younger, when you’re 23 or 24, you can take that year off, but for me, I wanted to get back into it and keep playing,” he said. “You don’t know how many years you have left. You may as well keep doing it while you can.”

Now in his fourth season in Florida, Milan, who inked a new contract with the team back in July, will look to help Pensacola secure its fourth President’s Cup title and first since 2016 while also navigating a season operating during the COVID-19 pandemic. The league itself is only half its normal size, with only five of 10 teams opting in to the 2020-21 campaign.

“Everyone needed this after a long offseason. It’s been a long offseason, nine months off is probably about the longest that any of us has been off skates since we started skating,” he said. “It adds a bit of normality back into life.”

With the Meadow Park Sports Centre rink shut down for the summer, Milan was off ice for several months, but appreciated the opportunity to lead skills camps and assist the local midget rep team when action resumed.

Though Milan’s access to ice was limited to coaching opportunities before returning to Florida, it was more than some other players had. However, the level of SPHL play has been high, he said, as all North American minor leagues have seen teams opt out of the season, pushing high-quality competitors into lower leagues.

Another partial sense of the Before Times are that limited numbers of fans are allowed to attend the games. Both of Pensacola’s home contests saw upwards of 2,500 spectators in the Pensacola Bay Center, which seats just over 8,000 for hockey.

“In minor pro, we wouldn’t be able to play if we didn’t play in front of fans,” Milan said. “We’re still playing in front of fans. Not as many as we’re used to, but for social distancing reasons and [compliance] with the different protocols so we’re safe.

“You can definitely notice it at a couple of the rinks already that fans are down compared to what they would be in a normal year, for sure.”

Milan acknowledged that buildings that are less than half-full aren’t uncommon sights in the SPHL in some locales, especially for weeknight games.

Milan, who exceeded a point-per-game pace in his prior three seasons with the club, has maintained that trajectory this season as well with seven points in Pensacola’s first five games as they lead the league with a 3-2 record.

The season has already hit some turmoil, as Pensacola’s two games scheduled for this past weekend were postponed as a COVID-19 precaution. Milan noted that each player received a 24-page document outlining protocols prior to the season and said the pandemic has impacted how the team runs.

“We got tested before we got down here and once we got down here as well. We get COVID tested every week,” Milan said, adding that the team members also wear masks in the dressing room and around the facilities. “It’s definitely a different year, for sure, but we wanted to keep playing and have a full season.

“That’s the reason we’re down here. It’s pretty easy to follow the rules when you know what’s at stake.”