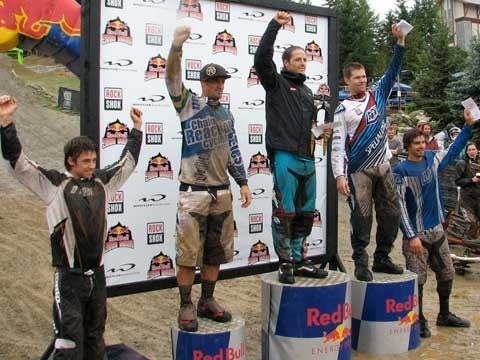 Riders taking part in the Red Bull 5000 Down mountain bike race woke up to heavy rain in the valley on Sunday and over 30 cm of wet snow in the high alpine where the start line awaited.

Riders were lined up 10 in a row according to their qualifying times the previous day and the start was nothing short of intense. Riders slid their way from the peak of Whistler Mountain down Matthew's Traverse, eventually coming to the short climb to the peak of Harmony where the bike race became a footrace. From there, the riders had a pair of tire tracks on Pika's Traverse to follow back down to the Roundhouse and the snow line.

Chris Kovarik, who divides his time between Whistler and Australia, took the early lead but got caught up in snow and was passed by Tyler Morland on the bike-run section.

"It was just me and him for probably 10 minutes, battling," said Kovarik. "Then I crashed on In Deep and he got away. I caught up a few minutes later."

Kovarik was working to get back into position to pass Morland when he overshot a jump and landed on an uphill berm, crashing a second time. He was literally run over by a surging Curtis Keene, who placed second on the day, just behind Morland.

Kovarik said the race was a good way to wrap up a mixed season where he's been on the World Cup podium one moment and sidelined by injuries the next. His factory team, Chain Reaction Cycles/Intense won the overall team title on the World Cup downhill circuit.

"I was hoping to finish here (Red Bull 5000 Down) with a win, but obviously that didn't happen today. Anything can happen, and today it was two feet of snow."

Morland says the mass start was civilized and clean, despite the opportunity for crashes as the riders vied for the hole shot - in this case the tire tracks in the snow.

"It was great, because everybody in the front row are friends, nobody was playing dirty out there," he said.

Morland also tried to focus on having a good run and after getting out front he didn't focus too much on what was happening behind him.

"The snow was just loose and people were fishtailing all over the place," he said. "I managed to get to the hill with everybody and jogged up the hill in first."

While the conditions deteriorated from the previous day, Morland switched to spiked tires the previous night for extra traction. Others riders did the same, or opted for aggressive mud racing tires.

Tires aside, times were also about seven minutes slower than the previous day with the wet and slippery conditions. You could push it a little, said Morland, but you also had to ride within your limits.

"As long as you rode it for fun you were fine," he said.

A past national champion, Morland said this was one of the biggest wins of his career.

"Any time Red Bull puts energy into something like this, or Rock Shox, it's a big deal," he said. "They really work for the athletes and try to make sure their events are a great experience.

"It was tough, but everybody who rode today is going to remember this event."

For Allison, who had mechanical issues at the world championships in Quebec the previous week, the Red Bull 5000 Down was a chance at redemption.

He was aggressive at the start, using his experience racing cross-country to get into the front group early. He then held onto his position from top to bottom - a drop of nearly 5,000 feet.

"I ended up peeling my goggles off, because I couldn't see with them on, just threw them into a bush," said Allison. "But other than that, that was so much fun - the most fun I've ever had on a bike."

The highlight for Allison was passing Steve Smith, who was second at the recent world championships.

On the women's side the top rider was Lauren Rosser of Squamish, fresh off her win in the junior category at the world championships.

The top was chaotic for Rosser, leaving a few rows back at the start. Riders were slipping and falling in the snow, and it was hard to pick a line.

"I like my tires," said Rosser. "Everyone else was flailing around in the snow and I was able to get through that part without any problem."

Once off the snow Rosser got in behind Katrina Strand, the defending champion from the 2009 Red Bull Exodus, in the first singletrack sections. Rosser made her pass on the next fire road and started trying to pick off some of the male riders ahead of her, letting go on the fire roads and then playing it safe on the technical sections.

Rosser says she generally does better in the mud, which is part of her experience growing up riding in Squamish.

"For me that was the best thing ever," said Rosser. "I like racing in the mud, it's so fun."

Like Allison, she also had goggle issues. When she went to peel off a layer of goggle protector every layer came off at the same time. She had to rely on her arm to keep her goggles clean.

Brook Baker finished the ride in second place after winning the qualifier the previous day. She had a tough time negotiating a path through riders at the top but felt better when she had a little bit of space.

"It was awesome," she said. "It was a totally different experience racing in the snow and mud, but I'm really glad we got to race with the men because otherwise it wouldn't have been the same. It was exciting to have so many people out there falling and pushing their bikes and trying to ride and tripod-ing through the snow."