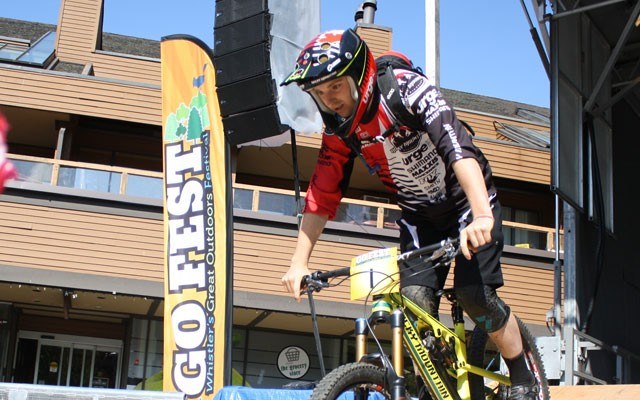 DOUBLE THE FUN Jesse Melamed starts off the GO Fest Enduro, which was part of the North American Enduro Tour in 2015. Whistler will host two events on the tour in 2016. File photo by Dan Falloon

The North American Enduro Tour (NAET) is bringing not one but two events to the resort as part of its schedule. The NAET's season will kick off with the Whistler Enduro Spring Classic on May 28 and 29, while the Whistler Enduro Fall Classic is slotted in for Sept. 10 and 11. Other stops on the tour are in Angel Fire, N.M., Sun Valley, Idaho and Mammoth, Calif. The tour finals will take place in November in Mascota, Mexico.

Though the schedule was posted on its website beforehand, the tour officially launched its season on April 6. One major announcement for the sixth season is the increased role Whistler's Crankworx Events Inc. is taking as organizers. The group, headed by general manager Darren Kinnaird, has been involved since the start. However, with the goal of making the title more prestigious and attracting more and higher-level riders, Kinnaird proposed his team take the reins.

"The other guys didn't really have time to dedicate towards it and it bumped along. We decided this year if we take it over, we can actually really push it, really make the series mean something, get the media out there, get some coverage of it," he said. "We have an opportunity, now that the sport's getting bigger globally, to put on a good-quality series for North America. It's a stepping stone to the Enduro World Series for athletes."

All events, except the season opener, serve as Enduro World Series qualifiers.

The Whistler races will take place on two distinct courses, and though Kinnaird said there are some designs in mind, final routes have not yet been put in place.

"We have some idea, but we're waiting to see how the snow melts this year, especially for the one at the end of May," he said. "We'll have much different options for the fall."

With the tour starting just next month, Kinnaird felt it would be wise to begin with and rely on the site where he and his team have the most familiarity.

"In the first year of us taking over, it makes a lot of sense for us to be able to deliver two events here. That way, we have two events in Canada as well," he said, noting he later hopes to host races in other Canadian locales. "It'll be the same team that puts on the Enduro World Series, who lives here. (It's) the same team that put on the North American Enduro Tour stop last year that was part of GO Fest. It should be a good, challenging day on your bike."

Other tours with which the NAET is teaming this year are the Scott Enduro Cup, the Big Mountain Enduro Series, the Kamikaze Bike Games and California Enduro Series.

As well, Kinnaird welcomed the chance to expand into Mexico this year, with Mascota sitting nestled in mountains about a two-hour drive southeast of Puerto Vallarta.

"We've never taken a race to Mexico with the North American Enduro Tour," Kinnaird said. "It just seems like it's a really cool adventure experience."