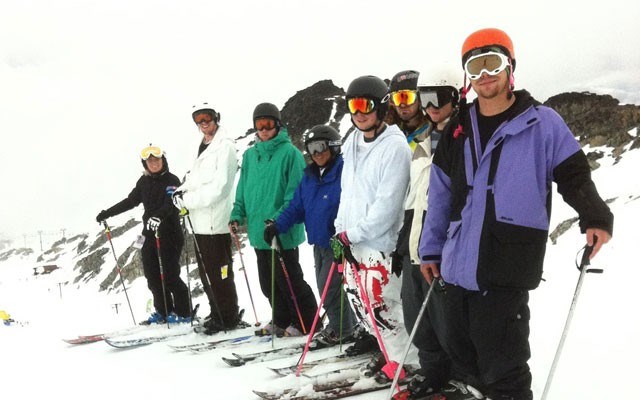 Thanks, coaches Participants at a Super Coach Academy, which was initiated by Peter Judge, are shown. Photo courtesy of the Canadian Freestyle Ski Association

Coaching can be a challenging and thankless task.

The 30-year veteran began coaching skiing at age 13 and from there has gone on to represent Canada at seven Olympic Games as a coach and team leader. When he competed as a young freestyle ski athlete, there wasn't much of a coaching staff, further underlining the role's importance to him.

"It's a pretty selfless profession," the five-time Coaching Association of Canada Coaching Excellence Award winner said. "You have to be very much in the mindset of how you're going to benefit somebody else, and (use) your abilities to further somebody else's career, agenda or progression.

"It's probably one of the most rewarding experiences, just the simple thing of being able to work through with an athlete on a concept and then have the lightbulb go on is an extremely gratifying experience."

Judge, therefore, understands the importance of celebrating the first-ever National Coaches Week, a ViaSport initiative from Sept. 19 to 27 to provide free National Coaching Certification opportunities for local coaches, as well as to honour them.

Judge will be a special guest at an event honouring coaches at the PassivHaus on Sept. 25. Judge said he's looking forward to taking part in giving those in attendance their due.

"It's a chance to highlight coaches at all levels, whether it's the high-performance coaches that are dealing with our elite athletes or the grassroots that are leading the athletes through the pathway," he said. "Any time you have the opportunity to pass on experience, it's always valuable."

Whistler Sport Legacies (WSL) is hosting the week's programming in Whistler, with seven of eight instructional sessions coming to the Whistler Athletes' Centre. The program has proved to be popular — as of Sept. 15, half the local sessions were already completely full.

Though this is the first time the event is being celebrated on a national scale, WSL vice-president of sport Lucinda Jagger said ViaSport approached the organization last year about resurrecting a small coaches' appreciation night as part of B.C. Coaches Week. This year, she expects about 60 coaches to attend the evening.

"I'm excited. It's just a start," Jagger said. "We want to be seen as a centre for coaching development, as well as how much we appreciate our coaches."

As for the free courses, topics range from nutrition to planning a practice. The sessions are open not only to certified coaches, but also to parents, volunteers, teachers or athletes looking to sharpen their coaching skills.

Jagger noted the Resort Municipality of Whistler and District of Squamish are also involved with helping to make the week a success on a local level.

Registration for all courses is available at viasport.formstack.com/forms/coaches_week_courses.