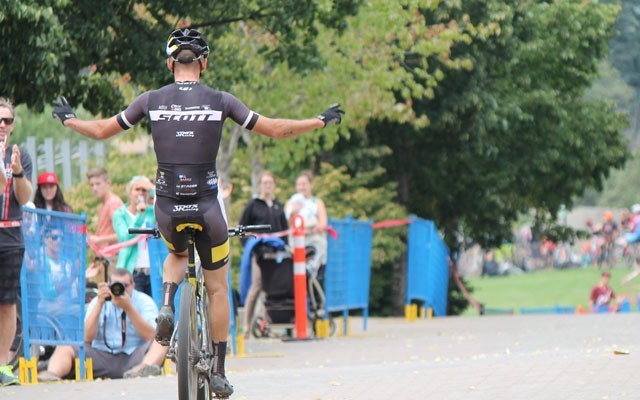 FINISHING OFF Geoff Kabush extends his arms in celebration as he completes the Canada Cup race in Whistler on Aug. 14. Photo by Dan Falloon

A long season for elite cross-country riders culminated in Whistler on Aug. 14.

St-David, Que.'s Cindy Montambault, who entered with just a five-point lead on Elyse Nieuwold, rode to a win to claim the overall title.

"I came here last year and I knew that the course was very good, so I was happy to be here today," she said. "In the technical (sections), I tried to be steady, not too flat, because I know that this course was hard on the tires. I was just trying to hammer it through the climbs."

Montambault took the lead fairly quickly, but didn't blow away the competition as she tried to pace herself properly to avoid getting passed late by a fresher rider. Jean Ann Berkenpas ended up in second and Nieuwold rounded out the podium in third.

"The overall is nice to get — it's the first time I've ever gotten that," he said. "To lead that series and show that consistency overall throughout all the races was really important for me this year.

"I almost want to share that series lead with (Disera) because he would have had it if he had come out here."

Former Olympian Kabush didn't take part in the first three races on the circuit after battling knee and other health problems this season, but won the last two to make a charge up the standings.

"I'm living in North Vancouver and these are the trails I grew up riding," he said. "It's been a challenging year for me on the race circuit, but today I felt great. It feels good to feel good again riding my bike."

Kabush said there was a pack of riders early on, but he eventually separated himself to create a lead.

"There were a little bit of tactics early on with guys going hard," he said. "After a lap and a half we sorted it out, I got to the front of the race and started to pile on the pressure from there and gradually open up the gap."

McNeely said Guthrie, another Norco teammate, was riding well enough to win before suffering the mechanical, and he personally didn't quite have as much as he needed to knock off Kabush.

Kabush (elite men) and Disera (U23 men) will represent Canada at the 2015 UCI Mountain Bike World Championships in Vallnord, Andorra from Aug. 31 to Sept. 6. Kabush said the recent wins give him a boost in advance of the major competition.