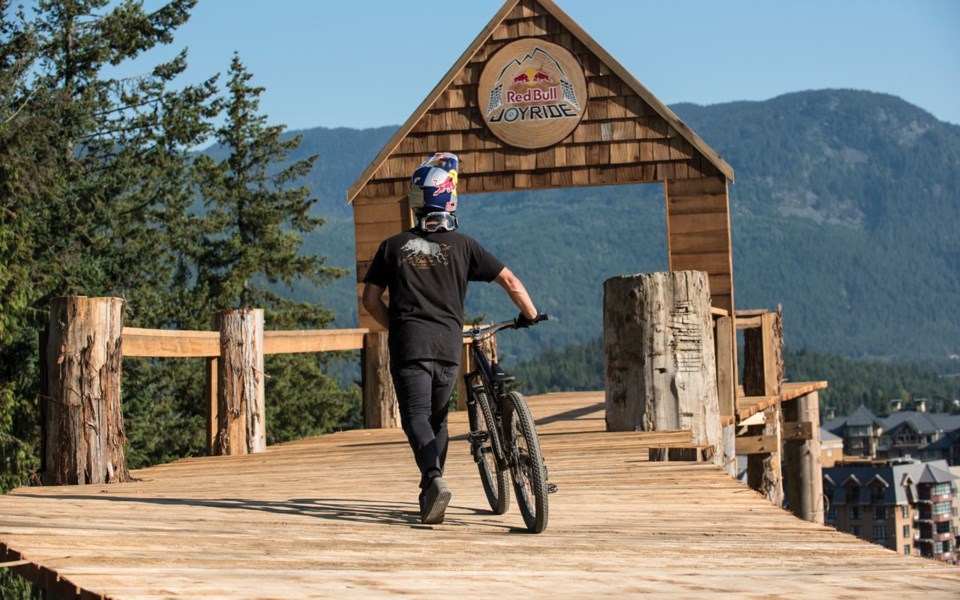 It's been awhile since the Red Bull Joyride course received a revamp, and the changes are getting a thumbs up from one rider.

Carson Storch, an American athlete, had the opportunity to ride the course before training officially began on Aug. 13 as a result of his Red Bull sponsorship. The new course received rave reviews from Storch, who felt courses all over the world were becoming homogenized. This one, he said, is a welcome break from the mould and will be fun to watch during the event on Aug. 17 at 4:30 p.m.

"This one is definitely pretty technical and challenging in spots. It's going to even the playing field. It's going to be hard to connect tricks to it. It's definitely not a simple course," said Storch, a Joyride veteran who is not competing this year. "It's going to be a challenge for everybody that's going to ride in the event, but it's exciting to take the predictability away."

In recent years, athletes could choose one of two features to drop or step down into the course, and this year, the second hit will also allow competitors a choice with a cannon log or an up-box. Later on is Storch's favourite new feature, a dirt double (or, according to course builder Paddy Kaye of Joyride Bike Parks, a triple threat) with a dirt lip and dirt landing (with optional lips to the left or right before the jump). He appreciates that riders are given the opportunity to chart a course different from their competitors.

"You don't really know what each rider is going to go for. They'll go with their strengths and ride their best," Storch said. "They can stand out if they want to be a little bit more creative."

When he started competing almost a decade ago, Storch said all the courses were "different and kind of strange."

"You had to go to the contest and adapt to what the course-build was. You would just do your best and it was anybody's game," he said. "Nowadays, a lot of the courses are pretty similar. The sizes of the features are similar and all the features are kind of the same. It got repetitive, I guess, as the sport progressed.

"It's bringing it back to the roots of slopestyle," Storch added.

Storch imagines there will be less leeway for flubs this year, as riders will have to land perfectly to keep their momentum going from one feature to the next. He added that riders who have a dirt-jump background will be aided by the change, as they'll be creative when it comes to approaching the course while also maintaining flow and speed.

Joyride Bike Parks president Kaye was proud of his team for handling the changes well this year. While there are new elements, there are also familiar ones for long-time fans of Joyride.

"It's, once again, the biggest jumps on a slopestyle course in the world. We've kept that theme going," he said. "The track follows the same footprint because we figured out how to manage the speed many years ago, but we just sort of mixed everything around."

The change was brought about, in part, because of the dual slalom and speed and style courses moved from the Boneyard to Blackcomb Base II, giving builders some additional freedom to work with this year. One byproduct of the changes, Kaye said, is improved sightlines for spectators, as the cabin is gone and other larger features are on the fringes of the course.

"Part of the build was taking into account where spectators go and how they see the course," he said. "The other big thing with moving a lot of these features around is sightlines are a lot different this year. One thing we've noticed and, I think, people are going to have to walk around to figure it out, but there are a lot of spots now where you can see the whole track."

In terms of new elements, the triple threat, Kaye said, is unique because it is a dirt feature as opposed to the wooden infrastructure commonly found on course.

"It was inspired by what's going on with skiing and snowboarding. We brought a snow-style feature to the dirt," he said. "Of course, it's different because we're bikes and they don't have edges, but we looked at the sport for inspiration."