Whistler lauded for accessibility efforts
Dec 1, 2006 8:06 AM By: Andrew Mitchell 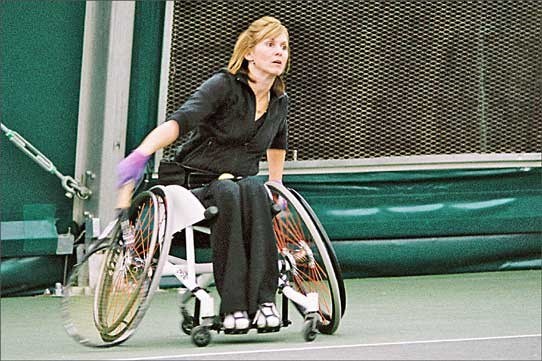 With the 2008 Paralympic Games just 18 months away, the 2006 Birmingham National Wheelchair Tennis Championship was an audition of sorts for dozens of the top players from across the country.

Held at the Whistler Racquet Club last week, the event also gave the community an opportunity to gauge its overall accessibility, and to start to plug any gaps that emerge between now and the 2010 Paralympic Winter Games.

The event was a success on both fronts, with several players gaining the attention of national coaches and the players themselves giving Whistler top marks for accessibility — issues with the snow and cold not withstanding.

The biggest upset of the weekend was in the men’s doubles competition when fourth-ranked Claude Brunet topped Yann Mathieu, the 2005 national champion, in the semi-finals, losing the first game 3-6, then winning the next two 6-2 and 6-2. He then went on to face number three-ranked Christoph Trachsel in the finals and won 7-6, 6-4 to claim the title.

On the women’s side, Yuka Chokyu of Vancouver easily defended her national title, beating Quebec’s Helene Simard in straight sets, 6-2, 6-2.

It was a similar story in doubles tennis. Brunet and Trachsel, now ranked first and second in singles tennis and the reigning doubles champions, were unable to beat the pairing of Corey Blatchford and Phil Rowe, who were ranked second coming into the championships. Blatchford and Rowe went on to win 6-2, 6-2 in a game that was defined by its long rallies.

In the quad wheelchair open singles competition Sarah Hunter defeated Adrian Dieleman for the title. Dieleman and Hunter then teamed up to win the doubles event over Ken Bartel and Alexis Chicoine, 6-0, 6-0.

This year, thanks to contributions from the Birmingham Family, the winners of each category received cash prizes from a total purse of $15,000, as well as glass statues presented by Tennis Canada.

According to Severine Tamberero, the head coach for the national disabled team, the championships gave a chance for up and coming players to show their skills.

“I think it was good, there was a lot of depth in the men’s side, and we have a new champion in Claude Brunet. Corey Blatchford is a member of our development side, and he’s definitely coming up strong,” she said.

“On the women’s side, Yuka Chokyu showed why she’s ranked ninth in the world and seems to be getting better all the time, and Annie Morissette on the development team was holding her own against the top players.”

However, competing in the nationals is a requirement to compete at the international level.

In terms of funding, Tamberero is waiting to see what kind of support a proposed Own The Podium plan for summer sports receives at the federal level. The Own The Podium 2010 plan for winter sports increased funding for national sports organizations substantially, while also contributing money to sport sciences that are of particular interest to Paralympic athletes who rely on special equipment.

“(Own The Podium) is a great idea,” she said. “You can already see the level of commitment on the part of the athletes, and what they can do. It would be nice if we recognized that and to be able to think of their sports as a little more like a job, and be able to commit even more time to training and travelling.”

As for Whistler’s ability to host the Paralympics, Tamberero says that most accessibility issues have to do with the snow.

“The facility was great, the people are great, and having the ability to go out and do things in the village was awesome. Access-wise the hotels were good, the village was easy to get around, they could go to restaurants and shopping,” said Tamborero. “It was a little cold in the (Whistler Racquet Club) bubble which made it a little tougher on the athletes to play, and the snow caused a few issues, but overall accessibility was really good.

“I wouldn’t know what to recommend for the Paralympics, just for (organizers) to be prepared for snow and for Whistler to keep doing what you’re doing.”

Chokyu was pleased with her wins in singles and doubles this year,

Chokyu currently trains four or five days a week, and thinks of tennis as her full-time job. Her goal of making the Paralympics in 2008 is front and centre, but she says the national championships are always a priority.

While Chokyu dominates in singles play with consistent shots and by getting around the court effectively, her best game was arguably in the doubles championship, where she and Simard worked together to cover all the angles and kept their returns hard and in-bounds. According to Chokyu the two have played as a team on and off since 1997, and know how to play around each other.

The game also highlighted two different levels of commitment. While Chokyu trains full-time, Simard, a four-time Paralympian, says she is often too busy with other priorities.

“It’s hard for me to spend the five days a week on court,” she said. “Some athletes practice full-time, while some work and others have family to manage.

“I’ll try to make Beijing. For me it’s hard to manage everything on top of trying to qualify, but it would be great to be able to make it to a fourth Paralympics.”