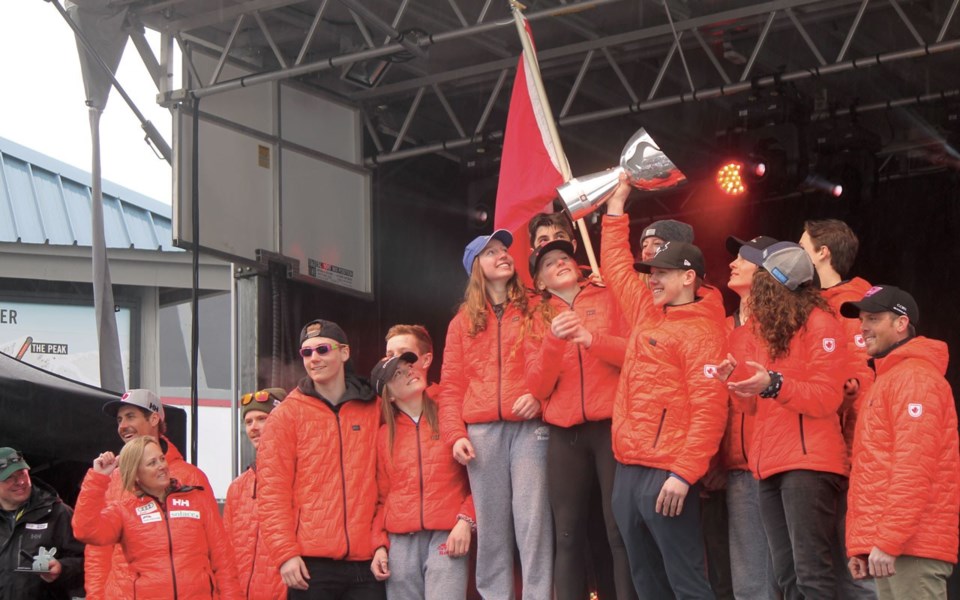 NEW NAME Canada will look to defend its title at the O2E Brands Whistler Cup this April. <ParaStyle:CUTLINE\:CUTLINE Credit>File photo by Dan Falloon

O2E Brands was revealed as the new title sponsor of the race, which will run this year from April 16 to 19.

Race director Christine Cogger could not confirm how long the agreement is set to last, though she did call it a "significant relationship."

Racing the downhill, Alexander cruised to a 19th-place finish while wearing bib no. 42, coming in 1.57 seconds back of winner Beat Feuz of Switzerland. Italy's Dominik Paris was second while Germany's Thomas Dressen took third.

"It feels really good to go out today and grab my first World Cup points. It's definitely a real confidence boost going into the rest of the season and I can't wait to try and keep it rolling next week in Kitzbühel," Alexander said in a release.

Canucks failed to complete two runs in the weekends two other races.

In the Alpine combined on Jan. 17, Austria's Matthias Meyer topped Frenchmen Alexis Pinturault and Victor Muffat-Jeandet for the win, while in the slalom on Jan. 19, France's Clement Noel came in ahead of Norway's Henrik Kristoffersen and Russia's Alexander Khoroshilov.

On the women's side, Erin Mielzynski skied to a 30th-place finish in the parallel giant slalom in Sestriere, Italy on Jan. 19. Clara Direz of France secured the win while Austria's Elisa Moerzinger and Italy's Marta Bassino rounded out the podium. No Canadians completed two runs in the Jan. 18 giant slalom. Italy's Federica Brignone and Slovakia's Petra Vlhova tied for the win while American Mikaela Shiffrin was just 0.01 seconds back.

Three medals for Canadians at Nakiska

"I tried to ski as hard as I could out of the gate on each run and ski better than the people next to me. In the finals, I just treated it like all the other heats of the day. It didn't sink in until the last feature that I was en route to a win! This is huge," Howden said in a release.

Whistler Freeride Club alum Tom Peiffer kicked off the 2020 Freeride World Tour season in the middle of the pack.

The 18-year-old took a third-place finish in the slopestyle competition, scoring a 79.68 to finish 6.45 points back of winner Caroline Claire of the United States. Norway's Johanne Killi, meanwhile, was sandwiched between the pair in second place.

The only other Canadian on the women's side, Olivia Asselin, finished in 15th.

As for the men, Etienne Geoffroy Gagnon was the top Canadian, posting a solid sixth-place finish. Norway's Birk Ruud held off Switzerland's Fabian Boesch and Colby Stevenson of the United States for the victory. Other Canadians in action were: Edouard Therriault (27th); Noah Porter McLennan (28th); and Mark Hendrickson (32nd).

The Canadian bobsleigh duo of Christine de Bruin and Kristen Bujnowski was just out of the medals in IBSF World Cup action at Innsbruck, Austria on Jan. 18.

The pair finished 0.26 seconds back of winners Mariama Jamanka and Annika Drazek of Germany and just 0.04 back of third-place finishers Kaillie Humphries and Sylvia Hoffmann of the United States. Laura Nolte and Erline Nolte of Germany were second. Two other Canadian sleds competed, with Cynthia Appiah and Dawn Edith Richardson Wilson taking 10th and Melissa Lotholz and Janine McCue ending up 15th.

On the men's side, the Justin Kripps-piloted sled finished fifth in the four-man contest on Jan. 19. The foursome was 0.69 seconds back of the German sled, piloted by Francesco Friedeich, which earned the win. Johannes Lochner's German team was second, while American Hunter Church slid into third.

The top-five was a bounce-back for Kripps, who finished 12th with Benjamin Coakwell in the two-man race on Jan. 18. Friedrich and Thorsten Margis scored the victory, while Great Britain's Brad Hall and Greg Cackett were second and Germany's Richard Oelsner and Tobias Schneider wound up third.

Whistler Mountain Ski Club's (WMSC) competitors scored a pair of medals and nearly had more during four days of FIS racing at Panorama Mountain Resort for Jan. 9 to 12.

Both podium appearances came on Day 2, with Julia Ross taking third in the women's giant slalom and Ryuji Gaman taking third for the men, with WMSC grad and BC Ski Team member Tait Jordan won the latter.

Both Ross and Gaman were the top WMSC reps in the Day 1 giant slalom as both took fourth, while Jordan was second among men.

In the slalom on Day 3, Alyssa Emery was the top WMSC women's rep in fifth while Kosuke Akita led the men in ninth. WMSC grad Nathan Romanin won the men's race while Jordan placed second.

In the final day of racing, another slalom, Ross and Gaman once again led the team, taking fifth and seventh, respectively. Romanin and Jordan were again the top two finishers in the men's contest.

Whistler mountain biker Cathy Zeglinski is up for an award at the Sport BC Athlete of the Year Awards in March.

Zeglinski was nominated for Master Athlete of the Year alongside Sooke track and field athlete Myrtle Acton and Sidney triathlete Keith Evans.

The awards will be handed out on March 12 at the Vancouver Convention Centre.