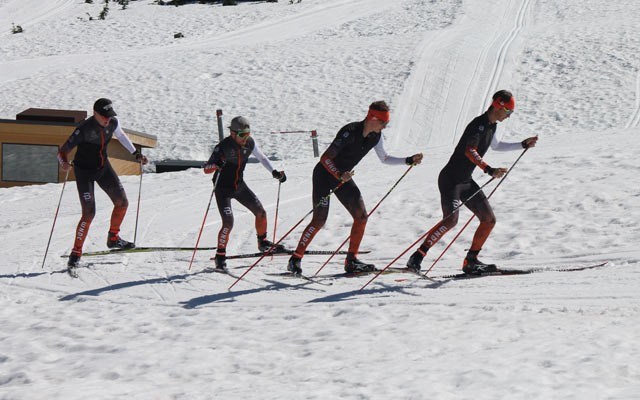 The skiers are in line, bright and early, at the Whistler Village Gondola.

It's not the middle of winter and, perhaps most surprisingly, their time spent going downhill will be minimal.

It's June 23 and two athletes and two coaches from Whistler Sport Legacies' Nordic Development Centre (NDC), as well as two independent athletes, are heading up to train on a new cross-country loop near the Roundhouse Lodge.

Biathlon head coach Etienne Letondeur noted athletes use the loop Friday through Sunday, but Fridays tend to see fewer athletes because many participants are high-school students wrapping up exams right now. Roughly 20 athletes have used the loop so far. Letondeur estimates by the time the snow melts, 25 to 30 in total will have come through.

He explained that in addition to being an on-snow option, there are some side benefits for athletes as well.

"The elevation training is a good thing for them. It's not too high. We get elevation benefits, but when we train and it's too high, there's a lot of fatigue and the athletes get tired really fast. Here, it's the perfect elevation," Letondeur said on the gondola ride up to the top.

The Whistler Mountain option is one of only two summer sites for Nordic training, alongside Alberta's Haig Glacier, though NDC assistant coach Martin Schrama acknowledges the B.C. location is far more preferable.

"I've been there (Haig) many times when I was an athlete in racing and the access here is just so awesome," he said. "At Haig, you go up there for a week, all your stuff is helicoptered in and you run in.

"Everybody stays in a big dorm room. Twenty athletes in a dorm room, you're bound to get sick. And you're staying at really high elevation so you're not sleeping that well. It's at least an hour every morning to hike to the snow."

As well, there are no shooting opportunities at Haig, whereas here in Whistler, athletes can take the lift down and head to the Olympic Park to work on the other element of biathlon — often in shorts and a T-shirt after going home for lunch.

Letondeur explained if the athletes weren't able to access snow, they'd have to roller ski, which they'll do when the snow ultimately melts. He said rolling on the pavement provides some benefit, but several weeks of additional on-snow training should give the NDC athletes a headstart when the 2017-18 season begins.

"Technically, it's going to be a big advantage to ski for longer. We had a great season at the Olympic Park last winter. We skied about 225 days up there and being able to extend the season, that can make a big difference to our competitors," he said, noting NDC athletes can also start training earlier because of Callaghan Gold — the snow Whistler Olympic Park saved from the previous winter. "We'll be off snow for less than three months."

NDC athlete Angus Tweedie of Smithers explained he's taking the bonus time to work on his technique, with intricacies like using his legs more and getting lower in his stride. It would be a lot more difficult on roller skis, he noted.

"As great as roller skis are, it's a lot easier to do technique work when you're on snow so you have all the factors that you see when you're racing," he said.

Regardless of the conditions, athlete Jarod Algra of Abbotsford appreciates the chance to improve his skiing.

"It's been awesome skiing this late into the summer. I've never had that option before," he said. "The longer we're able to stay on snow and work on technique, (the better), instead of having a huge break between seasons."

There has been some snow loss since the loop opened, declining from a high of about three or four metres, Letondeur estimated. He expects to be able to use the loop for at least another month, maybe even into early August.

"It's been great so far. We've had great conditions so far," he said. "We're just starting to see a couple of rocks here and there.

"It's good for the athletes to train in a different kind of snow. In the early morning, it's usually a little bit icy and frozen and then when you wait a little bit more, it's softer."

Letondeur also noted some athletes take the time to not only work with new techniques, but new skis and waxes in order to get used to them before the major pre-season push, though neither of the NDC athletes out on this day were.

He added that this season is part of a pilot project limited to the NDC and local clubs in the Sea to Sky corridor. Letondeur hopes to open up the loop to a greater variety of athletes in 2018.

Now in its second year, the NDC doubled in size to eight athletes, three female and five male.