Happy Campers Public cross country skiing is closed but 15 members of the B.C. team and Callaghan Valley Training Centre hosted a camp in Whistler last week. Photo by Brad Sills
May 14, 2010 8:38 AM By: Pique Newsmagazine Staff 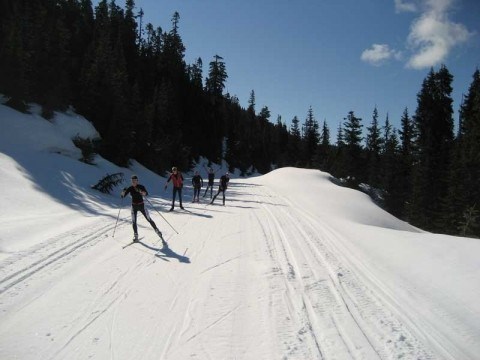 This past week the trails at Callaghan Country hosted a high performance cross-country camp for the B.C. Ski Team and members of the Callaghan Valley Training Centre. As well, Whistler Nordics Devo team member Nicki Murdoch was able to participate in one day of the camp after being selected to the provincial talent squad last season.

"I think she's more keen than she's ever been after the experience," said coach Maria Lundgren. "I know she had lots of fun coming out to meet the athletes and ski with them."

One of the best snowpacks in recent years provided excellent conditions for the camp participants, who skied up to the Callaghan Country Lodge each day before heading even higher into the alpine. Lundgren says they hope to use the camp to lure more camps in the future.

"This is the first time (the B.C. Team) has held a spring camp in Whistler, they usually host them somewhere else and usually out of province," said Lundgren. "The biggest thing we wanted to get out is how good spring skiing is here. We had excellent conditions this weekend, and I don't think anywhere else has those conditions in North America."

From the start one of the legacies of hosting the 2010 Games has been the cross country and biathlon trails at Whistler Olympic Park, as well as the adjoining trails at Callaghan Country. Not only does the area typically open for skiing earlier than most resorts in Canada - early November in most years - it also stays open later. Callaghan Country is officially closed to the public at this point, but the snow base on the alpine trails was 345 cm on May 3, the last day of operations, with 10 cm falling overnight.

As well, the athletes' centre at Cheakamus Crossing will have dorm-style beds to host athletes from across Canada for future camps. There is also a rumour in the Nordic community that members of the national team are looking to relocate to the area from Canmore to train for the 2014 Games in Sochi, given that their trails are at a similar altitude and have similar snow conditions.

Some 15 athletes took part in the camp, including new recruits to the Callaghan Valley Training Centre, one of several official training centres located across Canada. The team recently enlisted Chris Manhard as the new head coach, while former national team wax technician Graham MacLean is joining as the assistant coach.