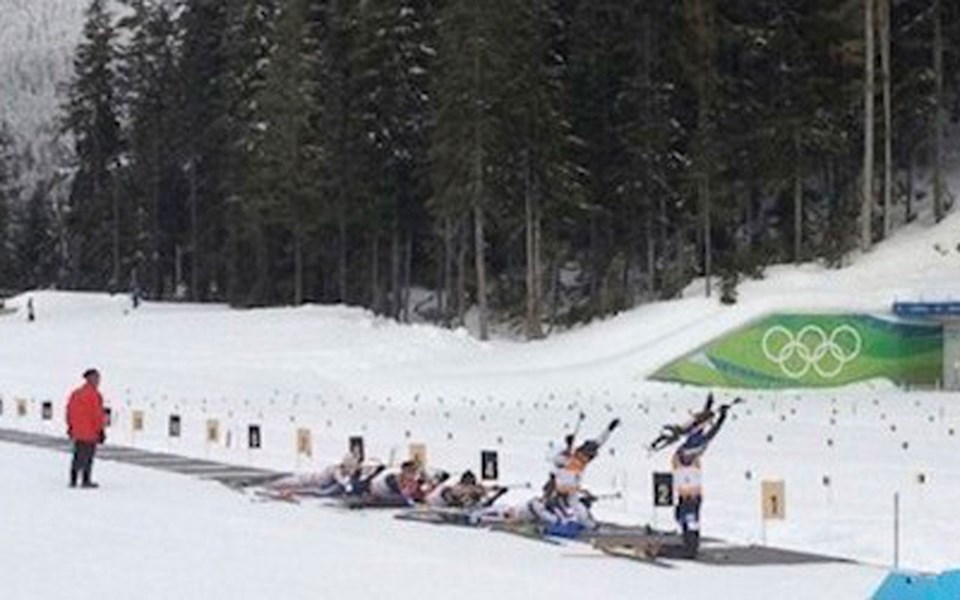 The Whistler Biathlon Society is getting set to bring the North American and Canadian Biathlon Championships to Whistler Olympic Park for the third time, but when the event comes in 2019, there could be some significant local contenders.

Local biathlete Benita Peiffer, who recently qualified for Canada's World Junior squad to compete in Estonia next month, explained there would be some differences competing at home.

"I think it's pretty cool to have such a big event in Whistler. It definitely brings more pressure because you're racing on your home turf and you should probably know what you're doing," she said. "It's pretty nerve-racking, but I'm exciting because I know these trails like the back of my hand and I train on them all the time."

Peiffer, whose strengths lean toward skiing over shooting, noted that though the ranges themselves are fairly standard from course to course, there will be some comfort in being at home when taking aim.

"I like shooting at my own range because that's what I'm used to. The lighting is all the same," she said. "Sometimes ranges have up-hills into the range and sometimes they have downhills and that all affects how you're going to approach your skiing."

Whistler Biathlon Society president Clayton Whitman said the organization has been working on a plan with Biathlon Canada for a year and a half, and with it being six years since Whistler last hosted, thought it would be an optimal time to bring it back.

"Our turn was up and we were keen and interested," he said. "We put our bid in and we got it."

The event is tentatively scheduled for March 19 to 24 in 2019, and the possibility exists that it could move up a week or two.

"The only thing that exists that might change those dates depends on getting national-team or junior-national-team athletes to attend," Whitman said. "It's right at the end of the World Cup season and we are trying to push the date as late as possible.

"We have the ability to move the event a week earlier, or even two weeks earlier, if we felt that would provide better weather and we'd have the benefit of having more athletes come."

Whitman noted roughly 150 racers attended in 2013 and expects to hit that again, if not even grow it to 200. He expects it to be more exciting for local fans as the biathlon has gained a foothold with Sea to Sky Nordics' increase in programming as well as Whistler Sport Legacies' Nordic Development Centre with eight full-time athletes.

"The sport has grown since then, especially locally. I wouldn't be surprised if we were even higher than (150) and closer to 200," he said. "Last time we hosted... our local Vancouver, Squamish, Whistler athletes were 12 or 13 years old and just really starting out in the sport. There was no full-time high-performance training centre here.

"In 2013, we didn't have a big local presence at nationals whereas this time, we're going to have local club athletes participating as well as the training centre team."

Whistler also hosted in 2008 and Whitman expects the prior experience will help the 2019 event run like a well-oiled machine.

"We have more knowledge of the preparation to do beforehand to make sure that everything runs smoothly when it's competition time. All the competitions are pretty much the same when you're actually on the snow. Not a lot changes. It's really just the preparations beforehand, the logistics are arranging hotels for everybody and making sure everyone's got transportation up to the venue," he said.

In other Nordic skiing news, the cross-country Toonie races at Lost Lake are off to a strong start with over 30 racers competing last Thursday. This week's event is set for Jan. 18 with registration at 6 p.m. and the race at 6:30 p.m. For more information, visit www.whistlernordics.com.

As well, with the Sigge's P'ayakentsut on the horizon on Feb. 24, over 100 volunteers are needed to help make the event happen on race day and in the lead-up.

For more information, check out www.payak.ca/volunteers.