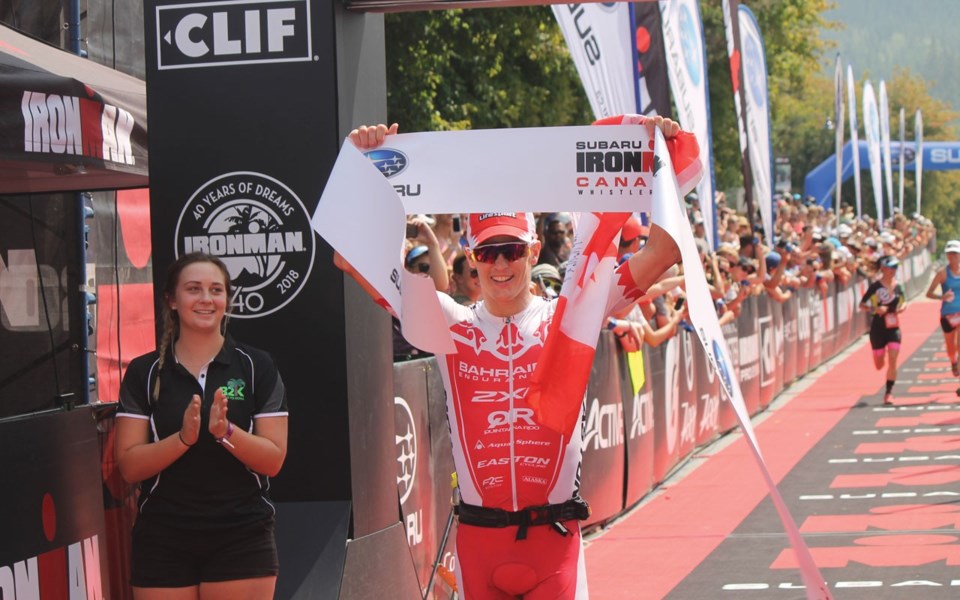 With temperatures cracking the mid-30s at Subaru Ironman Canada on Sunday, July 29, it was a brutal day for all competitors.

However, while Victoria triathlete Brent McMahon survived a 3.86-kilometre swim and 180-km bike ride without much difficulty, he needed to lean into a favourite motto to get through the marathon-length run course.

"Pain is temporary but the excitement of winning is forever," the two-time Olympian said.

McMahon, who grew up in Vancouver, topped the pro men's field at Subaru Ironman Canada, crossing the Whistler Village finish line in front of friends and family in a time of eight hours, 31 minutes and 33 seconds (8:31:33). The 37-year-old came in well ahead of runner-up Jeff Symonds of Vancouver (8:40:27) and Matt Russell of Sarasota, Fla. (8:45:34).

"The feeling is awesome. I've had friends in (the race) and I've followed and I've watched Ironman Canada for years and years," said McMahon, who raced in the Athens Games in 2004 and the London Games in 2012. "This is the first Ironman I ever watched live and to finally ... come here, and race it and win it my first time is unbelievable. It's such a great feeling."

In a strong showing in temperatures that reached the mid-30s, McMahon was at or near the front throughout the race, but created some separation with top challenger Mark Bowstead in the latter half of the bike course. His most serious challengers started to fade during the run, but McMahon still took nothing for granted.

"That's the wonderful and terrible thing about an Ironman: it's never in the bag until you get to the finish line. The marathon's so hard and your legs start to seize up. You walk in to aid stations," he said. "You just keep running because you've got to get to the finish line. I had a good buffer, so I just had to manage things and make sure I stayed hydrated and fuelled."

Symonds, meanwhile, had a yoyo kind of day, coming out of the water alongside McMahon and Bowstead, dropping back to fifth on the bike course, and then regaining ground on everyone but the champion on the run.

"About halfway through the bike, they were pushing it pretty hard to pull away. I noticed that I was already riding a lot harder than I should have been considering I still had a marathon to run," he said. "It's not about getting to the end of the bike as fast as possible, it's about getting to the finish line, so I had to slow down a bit.

"A lot of the guys that outbiked me really ended up struggling on the run."

Symonds, who has been training in Penticton to acclimatize to the heat, was pleased with his performance all in all.

Russell, the third-place finisher, only climbed into podium contention at about the 12-km mark of the run, which is just shy of the one-third point of the marathon. The 35-year-old was thrilled with how the day played out.

"I'm pretty satisfied. A great race for me would have been on the podium and a good race was top five," Russell said. "I peaked for the whole run. I think I got off the bike in eighth or ninth position and I just really kept believing in myself and I kept pushing and pushing."

Russell eventually climbed into third with about five km to go, but said that after a tough time on the new, looped bike course, Whistler's notorious marathon setup wasn't a welcome sight, either.

"There are lots of ups and downs (on the bike course). You're either pushing lots of watts or you're almost coasting downhill," said Russell, who ranked the bike course as among the toughest he's conquered in nearly 50 Ironman races. "You're doing that for close to five hours, so by the time you get out (on the run), you don't have as much zip and juice as you usually do."

Russell, who suffered life-threatening injuries when he was hit by a van during the Ironman World Championships in October, said while his recovery isn't complete, it's going well.

"It's been very tough mentally and physically. I'll take a couple steps forward and then I'll take one or two steps back," he said. "I still have issues right now. My neck's on fire and I still need to get work done on that.

"I'm not 100 per cent, but I'm happy with how things are starting to progress."

Bowen, who had the top local time among men, was generally satisfied with his race in the heat as he suffered through cramping.

"It was about three-quarters of a good race and then the heat got to me," he said. "I was shooting for 30 to 35 minutes faster, but unfortunately conditions had their own part to play."

She said she tried to keep a happy attitude and remain focused.

"You never know what you're going to get on race day and all you can do is try to control the elements that were are in control of. Part of that is just trusting in your abilities and staying smart with nutrition and hydration," she said. "For myself, I always try to maintain a positive attitude and a feeling of gratitude for being able to compete even when I'm suffering."

Zucht had already punched her ticket to this October's Ironman World Championships in Hawaii, so the pressure was off in that regard. Still, completing another race will help her when she heads south this fall.

"It was a slower time that I would have expected, but I would expect most of the athletes would say that given the conditions," she said. "Every time, I learn something new about what works and what doesn't work. It's a constant learning and adaptation experience.

"I get smarter every time I do them."

Ward, meanwhile, posted the top local 70.3 result. He's admittedly been more focused on his new carpentry business and 15-month-old baby than on training, but still put together a strong time.

"I maybe swam three or four times since I did the race in Utah three months ago," he said, adding he was particularly happy with his performance on the bike.

"From our perspective, we had a really good race," he said. "The venue was hotter than everyone wanted it to be, and I think overall, the athletes adapted the best we could and we had a good day."

McGonigal said the new bike course seemed to go over well, with its additional challenges.

"That was the big variable that changed," McGonigal said. "They liked being able to come through town and see all their friends and family and spectators along the side of the road.

"We didn't take the Ironman athletes up the Callaghan, and some of them thought it was going to be a little bit easier experience, but they found out pretty quickly that doing the full loop three times, there's not a flat section on the entire course."

Not all athletes loved it, though, as nine-time Ironman champion Marino Vanhoenacker of Belgium took to his Facebook page mere hours after finishing to say Sunday was "the worst race experience" and that he didn't find the spirit of Ironman during the race. Vanhoenacker did not respond to a request for further comment.

Vanhoenacker alluded to increased congestion in his post, as did some other competitors. However, McGonigal said when viewing the Ministry of Transportation and Infrastructure traffic cameras, the roads "weren't as congested as (they) were expecting."

He also said while there were some crashes, the number wasn't any greater than in other years, and none could be directly attributed to the course change.

"There were a few minor incidents and some crashes, but I wouldn't say they were necessarily due to congestion," McGonigal said.

Champion McMahon said there were some difficulties with congestion, with over 3,000 racers taking part, but he was overall satisfied with the loop.

Bowen, meanwhile, said it was difficult to pass at times, but appreciated increased fan interaction in the village.

Ward said many parts weren't too congested, but some parts raised a few concerns here and there.

"Alta Lake Road was a little congested going down a few hills and with the oncoming traffic, nobody was supposed to cross the line, but it was definitely three-to-four people wide at certain times of the race. Nothing too sketchy, though," he said.

"It was noticeable that there were more riders, but I didn't find that to be a problem. I didn't find, where I was in the race, that it was unsafe," she said.