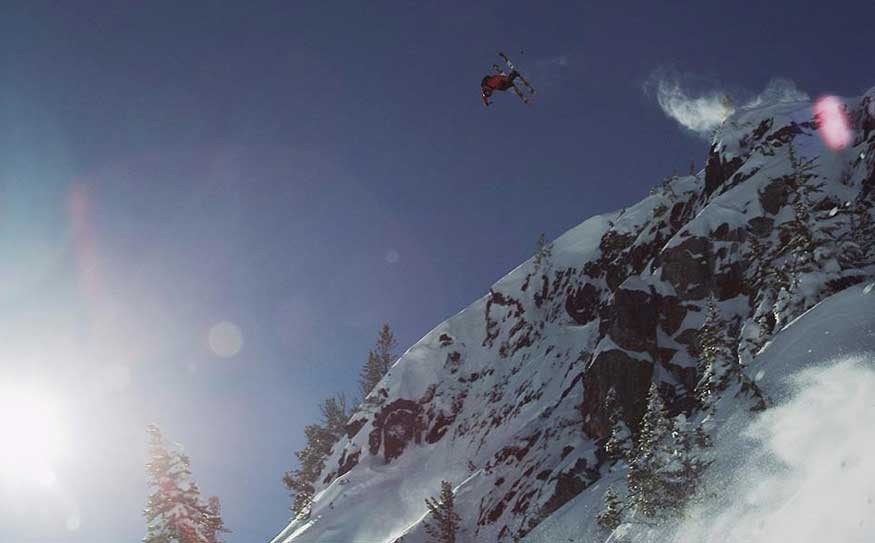 THE AIR UP THERE Big Mountain legend-in-the-making Julian Carr cleared all of Air Jordan in a single drop on Sunday. photo by Sherpas Cinema

Of all the storied features on Whistler and Blackcomb Mountains, one of the most famous is Air Jordan — a double cliff drop that's visible from the Peak Chair, and a guaranteed spectacle on a day like Sunday, Mar. 3 when the alpine opened after three days of storms dropped over a metre of fresh powder on the resort.

But nothing could have prepared Peak Chair riders for Sunday's show, when backcountry high-flyer Julian Carr decided to forgo the usual double cliff drop and air out over the entire feature. It hasn't been measured yet but it was at least 100 feet (33 metres), or the equivalent of jumping off a 10-storey building. The front flip only made it more impossible.

Carr told Pique on Monday that he got the idea for the drop from Stan Rey, a former member of the national ski cross team who made the switch to big mountain skiing. (Judging by Sunday's stunt, it's going pretty well.)

"A few times I've been up to Whistler I've glanced at the idea from the back of my mind — the kind of glance that is fleeting and more of a brief fantasy than a real idea," said Carr. "The real idea came about a week ago when Stan Rey mentioned there was a beautiful platform up there and I could send the whole thing from it. Stan mentioned it fleetingly as well, I don't think he knew that I was listening intently!"

It's not a trick that Carr would have attempted in many other circumstances, but with over 120cm of new snow that was completely untracked it suddenly became possible.

"(The alpine being closed) was absolutely critical for this to go down... 50 inches and a non-skied through landing was crucial. Sun is even better," he said. "To get all three things was absolutely amazing. Glad I could seize the moment."

The trick itself was captured on film by Whistler's own Sherpa Cinemas, working on an in-bounds segment for Whistler Blackcomb. Because of the WB connection, Carr and camera crews were able to get into the area for a few hours before the Peak Chair opened and inspect the entire stunt, from the angle of the cliffs to the landing zone.

"What it all boils down to though, it's all about my relationship with the cliff in the moment," Carr said. "Safety is of utmost priority. Once I have 100 per cent confidence then I can switch modes to be sure all filmers are in location."

While it wasn't Carr's biggest drop — a 230-footer in Switzerland has that distinction — Air Jordan had some complications of its own.

"That cliff in Switzerland was very sheer... Jordan was not sheer at all," he said. "I had to hit the cliff going groomer speeds fast. It was intense to get comfortable up there before wrapping my head around how fast I had to hit the cliff. I've jumped hundreds of 100-footers before, but this one was special. It was my rowdiest move to date."

Adding to the drama, spectators got to see a second skier drop Air Jordan the usual way almost immediately after Carr landed and skied out.

"That was Stan Rey!" said Carr. "The man! His first time hitting Jordan as well. He hit Jordan proper (and) did a little backflip off the bottom air like a champion. Yeah, Stan!"

For all the people who will never experience anything like Carr's jump, he describes it as a peaceful experience.

"It's a time warp when I first pop out into the open air," he said.

"Time stands still. (I) have a long conversation in my head in that split second. I see how far down the ground is, every detail in the snow, the trees, I hear birds chirping. Then I snap back into reality and realize I still have some work to do."

The landing was a little firmer than Carr is used to in his home ranges in Utah. "The best analogy is a cross between a full-body punch from Mike Tyson and a giant pile of leaves," he said. "Pretty harmless really. Skiing away in one continuous motion is the best feeling in the world. I yelled a nice hearty yell on the out-run."

When asked if he could hear thousands of people cheering him on at the Peak Chair line, Carr said, "I think I screamed louder!"